This page can be viewed at http://www.historycommons.org/entity.jsp?entity=eric_freedman_1

Eric Freedman was a participant or observer in the following events: 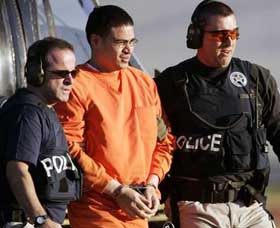 Jose Padilla being escorted by federal agents in January 2006. [Source: Alan Diaz / Associated Press]Jose Padilla, a US citizen and “enemy combatant” alleged to be an al-Qaeda terrorist (see May 8, 2002) and held without charges for over three years (see October 9, 2005), is charged with being part of a North American terrorist cell that sent money and recruits overseas to, as the indictment reads, “murder, maim, and kidnap.” The indictment contains none of the sensational allegations that the US government has made against Padilla (see June 10, 2002), including his supposed plan to detonate a “dirty bomb” inside the US (see Early 2002) and his plans to blow up US hotel and apartment buildings (see March 2002). Nor does the indictment accuse Padilla of being a member of al-Qaeda. Attorney General Alberto Gonzales says, “The indictment alleges that Padilla traveled overseas to train as a terrorist (see September-October 2000) with the intention of fighting a violent jihad.” He refuses to say why the more serious charges were not filed. Some provisions of the Patriot Act helped the investigation, Gonzales adds: “By tearing down the artificial wall that would have prevented this kind of investigation in the past, we’re able to bring these terrorists to justice,” he says. The Padilla case has become a central part of the dispute over holding prisoners such as Padilla without charge; by charging Padilla with lesser crimes, the Bush administration avoids the possibility of the Supreme Court ruling that he and other “enemy combatants,” particularly American citizens, must either be tried or released. Law professor Eric Freedman says the Padilla indictment is an effort by the administration “to avoid an adverse decision of the Supreme Court.” Law professor Jenny Martinez, who represents Padilla, says: “There’s no guarantee the government won’t do this again to Mr. Padilla or others. The Supreme Court needs to review this case on the merits so the lower court decision is not left lying like a loaded gun for the government to use whenever it wants.” Padilla’s lawyers say the government’s case against their client is based on little more than “double and triple hearsay from secret witnesses, along with information allegedly obtained from Padilla himself during his two years of incommunicado interrogation.” Padilla will be transferred from military custody to the Justice Department, where he will await trial in a federal prison in Miami. He faces life in prison if convicted of conspiracy to murder, maim, and kidnap overseas. The lesser charges—providing material support to terrorists and conspiracy—carry maximum prison terms of 15 years each. (Associated Press 11/22/2005; Fox News 11/23/2005)
'Dirty Bomb' Allegations 'Not Credible,' Says Former FBI Agent - Retired FBI agent Jack Cloonan, an expert on al-Qaeda, later says: “The dirty bomb plot was simply not credible. The government would never have given up that case if there was any hint of credibility to it. Padilla didn’t stand trial for it, because there was no evidence to support it.” (Rose 12/16/2008)
Issue with CIA Videotapes - In 2002, captured al-Qaeda leader Abu Zubaida identified Padilla as an al-Qaeda operative (see Mid-April 2002) and the government cited Zubaida as a source of information about Padilla after Padilla’s arrest. Yet, sometime this same month, the CIA destroys the videotapes of Zubaida’s interrogations from the time period where he allegedly identified Padilla (see November 2005). The Nation’s Aziz Huq will later comment: “Given the [Bush] administration’s reliance on Zubaida’s statements as evidence of Padilla’s guilt, tapes of Zubaida’s interrogation were clearly relevant to the Padilla trial.… A federal criminal statute prevents the destruction of any record for a foreseeable proceeding, even if the evidence is not admissible.… [I]t seems almost certain that preservation of the tapes was legally required by the Jose Padilla prosecution.” (Huq 12/11/2007)