This page can be viewed at http://www.historycommons.org/entity.jsp?entity=eric_godec_1

Eric Godec was a participant or observer in the following events: 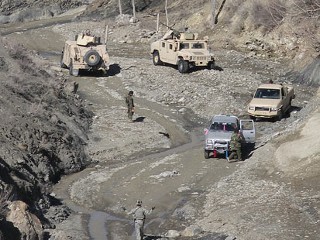 Afghanistan Canyon Area. [Source: ABC News]Serial Two of the Tillman brothers’ Rangers’ platoon, the Black Sheep, heads in a different direction from Serial One to deliver a disabled Humvee to a wrecker on the Khost highway (see April 20-22,2004). However, the tow truck driver refuses to continue when the road becomes impassable. He suggests taking the same route as Serial One, passing Manah to “circle around to the designated highway.” Sergeant Eric Godec must make the call. Although he finds his serial, Two, has lost radio communication with One, he agrees. Two must now make it through the same narrow passage as One (see 6:14 p.m.-6:34 p.m. April 22, 2004) with about 17 men and six vehicles, including the tow. (Coll 12/5/2004; Goff 8/9/2007; Krakauer 2009, pp. 250-276)
Soldiers Have Eerie Feeling - Men in both convoys will recall having “an eerie feeling” as they pass through the canyon. Kevin Tillman will say, “I knew damn well we were going to get hit.” According to author Jon Krakauer, “the cliffs rose so precipitously [on either side of the canyon],” Private Bryan O’Neal, in Serial Two, has to “lie on his back in order to scan the canyon’s ledges for Taliban through the scope of his M4 carbine.” Sergeant Trevor Alders, manning the Squad Automatic Weapon (SAW) for Serial Two, and later named one of the “friendlies” shooting at Pat Tillman’s position, will recall that the men speak of this “mutual feeling” of “eeriness” among themselves. As he remembers it, “the canyon closed in on us as we went further into it.” (Lindlaw and Mendoza 11/9/2006; US Department of the Army 3/19/2007