This page can be viewed at http://www.historycommons.org/entity.jsp?entity=family_reproductive_health_clinic_1

Family Reproductive Health Clinic was a participant or observer in the following events: 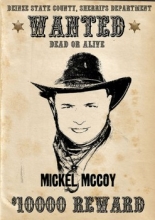 A ‘Wanted Dead or Alive’ poster featuring the name of a Charlotte-area abortion provider. [Source: Women's Rights (Change.org)]A women’s clinic in Charlotte, North Carolina, the Family Reproductive Health Clinic, is targeted with a series of “Wanted” posters naming the clinic’s doctors, and claiming they are “Wanted Dead or Alive” for the “crime” of abortion. The posters read in part: “We would like to introduce you to [two named doctors]. Their specialties are obstetrics, gynecology, and murder. Not only do these two men assist women and deliver babies, but they also harm women and kill babies.… You may contact them at their office or the clinic in which they perform the abortions.” The posters list the addresses of the named doctors’ private practices. The practice of anti-abortion organizations using such posters began as early as 1995 (see 1995 and After) and was ruled an illegal threat in 2002 (see May 16, 2002). The practice has allegedly resulted in the murders of three abortion doctors (see March 10, 1993, December 30, 1994 and After, and October 23, 1998), who were all named in similar “Wanted”-style posters. The practice has continued in spite of the court verdict (see January - April 2003). The clinic has been targeted for closure since 2002, when the Reverend Flip Benham, the head of Operation Save America (formerly Operation Rescue—see 1986), moved to the Charlotte area and vowed to shut it down. Since then, Benham and his group’s members have harassed and intimidated the clinic’s staffers and patrons; Benham has been videotaped screaming at patients that “Satan will drink the blood of your babies” and that the women will “go to your deaths” if they have abortions. Benham and his followers often use microphones amplified to what a clinic official calls “deafening levels” to speak to the patients, “swarm” patients’ cars as they enter the parking lot, and follow them up to the doors of the clinic, often stepping within inches of the patients as they harangue them. The clinic official says of the patients, “We try to prepare them for this when they make their appointment, but until you go through something like this, you can’t imagine what it’s like.” The police do little to curb the protesters’ actions, the official says. (Joffe 9/2009)