This page can be viewed at http://www.historycommons.org/entity.jsp?entity=first_kansas_mechanized_infantry_1

First Kansas Mechanized Infantry was a participant or observer in the following events: 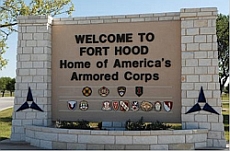 Entrance to Fort Hood, Texas. [Source: New York Times]Fort Hood, Texas, preparing for the annual “Freedom Fest” Fourth of July celebration, readies itself for a large crowd of local civilians planning to spend the day enjoying fireworks, marathons, concessions, military bands, carnival rides, and community activities. However, anti-government activists Bradley Glover and Michael Dorsett are captured by FBI and Missouri state police officers in Missouri before they can turn the festival into a massacre. Glover and Dorsett have become convinced that the United Nations is housing Communist Chinese troops at the military base, in conjuction with a “New World Order” conspiracy to invade and occupy the United States (see September 11, 1990). Glover, Dorsett, and others—all “splinter” members of an organization calling itself the “Third Continental Congress” (TCC—see Summer 1996 - June 1997)—are planning a multi-pronged attack on the Army base. Soon after, five others are arrested in conjunction with the plot.
History of the Fort Hood Plot - Glover and other TCC members believe that the April 1995 bombing of the Murrah Federal Building in Oklahoma City (see 8:35 a.m. - 9:02 a.m. April 19, 1995) was a plot by federal agencies to gin up an excuse to persecute “patriot” organizations. Glover told British reporter Ambrose Evans-Pritchard shortly after the Oklahoma City bombing that “it’s only a matter of time now before the shooting war begins.” He believed that the bombing would be followed by heavy-handed anti-terrrorism legislation that would see federal agencies attempt to violently eradicate militia groups, and in turn, those groups would violently resist. “If this thing goes down,” Glover predicted in May 1995, “there’s going to be an extremely large number of US military that’s coming to our side with their weapons. They’ll turn like a dog on a cat.” He believed the militias would easily defeat the government forces—“We can whip those guys. We can take out the so-called ninja wanna-bes. We’ll beat ‘em quick”—but worries that President Clinton will turn to the Chinese forces he supposedly has housed throughout the United States: “That’s what worries us,” Glover said. “Then we’re gonna be fighting big time.” Glover became known to federal authorities after his frequent interviews with reporters after the Oklahoma City bombing, and claims to lead groups such as the Southern Kansas Regional Militia and the First Kansas Mechanized Infantry. (In his “real” life, Glover is a part-time computer consultant.) When the expected crackdown failed to materialize, Glover became a national council member of a national “umbrella” militia group called the Tri-States Militia (see October 1995 and After) and then began associating with ever-more violent anti-government extremists. Glover, Dorsett, and a small group of extremists devise an extensive plan to strike at a number of government facilities and military bases, beginning with Fort Hood.
Arrests - But federal and state authorities are well aware of their plans. At 6:15 a.m. on the morning of July 4, FBI agents arrest Glover and Dorsett in their tents in the Colorado Bend State Park. The two have an arsenal with them: two rifles, five pistols, 1600 rounds of ammunition, bulletproof vests, a smoke grenade, a homemade silencer, explosive material, a night vision scope, and other items. “Their explosives would have been more damaging to the personnel at Fort Hood than to the physical installation,” Missouri State Highway Patrol Lieutenant Richard Coffey later tells a Texas newspaper reporter. “They did not have the same philosophy as the people in Oklahoma City. They were not looking for a huge explosion to make their point.” Instead, they planned small, repeated explosions. Glover, charged only with weapons violations, posts bail and flees to Wisconsin, where he is quickly arrested again after another weapons charge is added to the original indictment. Dorsett is held on an outstanding federal passport violation. Fellow plotter Merlon “Butch” Lingfelter is later arrested in Wisconsin on July 10, while looking for Glover; he surrenders his two machine guns and two pipe bombs, but says, “I’m not trying to be a noble knight in this, but it’s time somebody somewhere does something.” Despite his defiance, Lingenfelter tells a reporter that the meetings held by Glover were merely social outings. Kevin and Terry Hobeck are arrested on July 10 in Colorado after giving two illegal automatic weapons to undercover police officers; Thomas and Kimberly Newman are arrested on July 11 in Kansas after Thomas Newman gives the same undercover officers a sack full of pipe bombs.
Suicide Mission? - One law enforcement official believes that the group may have intended to die in the planned Fort Hood attack. “I think you have to have a warped sense of reality to think you can pull of a mission like that,” Missouri State Highway Patrol Captain James Keathley later tells a Denver reporter. “It sounds like a suicide mission to me. I don’t know if they could have pulled this off.” (Mark Pitcavage 1997; Southern Poverty Law Center 6/2001)
Sentences - Glover will draw a seven-year prison sentence, and the others lesser terms. (Southern Poverty Law Center 6/2001)