This page can be viewed at http://www.historycommons.org/entity.jsp?entity=frank_schaeffer_1

Frank Schaeffer was a participant or observer in the following events:

Former anti-abortion activist Frank Schaeffer, author of the book Crazy for God: How I Grew Up as One of the Elect, Helped Found the Religious Right, and Lived to Take All (or Almost All) of It Back, says publicly that the religious right anti-abortion movement shares the blame for the murder of late-term-abortion-provider George Tiller (see May 31, 2009). In a column on the “Huffington Post” website, Schaeffer writes that, in books they wrote that were bestsellers on the religious right, both he and his father, Francis Schaeffer, advocated using force to stop abortion if legal avenues failed. His father, he writes, “compared America and its legalized abortion to Hitler’s Germany and said that whatever tactics would have been morally justified in removing Hitler would be justified in trying to stop abortion.” He points out that Paul Hill, who was executed in 2003 for murdering abortion provider Dr. John Bayard Britton and one of his volunteer escorts in 1994, was “an avid follower of my father’s.” Schaeffer, who left the religious right in the mid 1980s, writes that he is “very sorry” for his own part. (Schaeffer 6/1/2009) In an interview on the “Rachel Maddow Show,” Schaeffer apologizes again for the anti-abortion campaign he helped found and build, and says, “[T]his is what helps unhinge a society.” (MSNBC 6/1/2009) 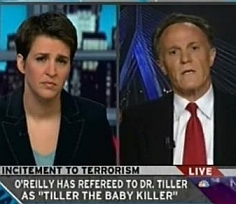