This page can be viewed at http://www.historycommons.org/entity.jsp?entity=frederick_fleitz_1

Frederick Fleitz was a participant or observer in the following events:

May 29, 2003: Libby Calls for Information about Wilson’s Trip to Niger

According to the subsequent investigation by special counsel Patrick Fitzgerald, Vice President Dick Cheney’s chief of staff, Lewis “Scooter” Libby, calls the State Department to ask about the results of former ambassador Joseph Wilson’s trip to Niger (see February 21, 2002-March 4, 2002). Libby is particularly interested in learning who the “unnamed ambassador” was, and who sent Wilson to Niger. (Alexandrovna and Leopold 11/2/2005; Dubose and Bernstein 2006, pp. 216) According to the New York Times, Libby asks an undersecretary of state, presumably Marc Grossman (see 12:00 p.m. June 11, 2003), for the information. (New York Times 2006) Grossman later testifies that Libby did indeed contact him for the information (see January 23-24, 2007). Grossman is allegedly involved in a nuclear smuggling ring (see (1997-2002) and Summer 2001), and knows Wilson’s wife, Valerie Plame Wilson, is investigating the ring (see Summer-Autumn 2001).
Libby Contacts Bolton? - However, according to a 2005 report by the news Web site Raw Story, Libby asks Undersecretary of State John Bolton for the information regarding Wilson’s mission to Niger. Bolton refers the query to Grossman, who directs the State Department’s intelligence arm, the Bureau of Intelligence and Research (INR), to prepare a report concerning Wilson and his trip (see June 10, 2003). Within days, Grossman informs Libby of Wilson’s identity. The INR memo is written as part of a work-up order orchestrated by the White House Iraq Group (WHIG—see August 2002). (Alexandrovna and Leopold 11/2/2005; Leupp 11/9/2005)
CIA Tells Bolton of Plame Wilson's Identity - Bolton also learns that Wilson’s wife, Valerie Plame Wilson, is a CIA official. He learns this from his chief of staff, Frederick Fleitz, who also serves as a senior CIA Weapons Intelligence, Nonproliferation, and Arms Control official. Bolton tells his aide David Wurmser, who is working concurrently in Cheney’s office. Wurmser passes the information along to another Cheney aide, John Hannah. Around June 11, Fleitz will inform Libby of Plame Wilson’s status (see (June 11, 2003)).
Bolton's Connections to CIA - According to Raw Story, Bolton has “his own connections to agents at the CIA who share… his political philosophy on Iraq.” Greg Thielmann, a former director at the State Department who was assigned to Bolton and entrusted with providing him with intelligence information, will later say of Bolton, “He surrounded himself with a hand-chosen group of loyalists, and found a way to get CIA information directly.” (Alexandrovna and Leopold 11/2/2005)

Frederick Fleitz, the chief of staff for Undersecretary of State John Bolton, informs Vice President Dick Cheney’s chief of staff Lewis Libby that the wife of former ambassador Joseph Wilson is a CIA official (see June 10, 2003). Fleitz, who is also a CIA officer at the Weapons Intelligence, Nonproliferation, and Arms Control (WINPAC) desk, is responding to an inquiry from Libby about the fact-finding trip to Niger by Wilson (see February 21, 2002-March 4, 2002 and May 29, 2003). Fleitz tells Libby that Wilson’s wife, whom he does not name but who is Valerie Plame Wilson, works at the CIA, and is believed to have been responsible for sending Wilson to Niger. (Alexandrovna and Leopold 11/2/2005)

October 28, 2005: Libby Indicted for Perjury, Obstruction of Justice over Outing of CIA Officer 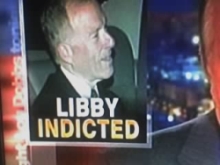 ; MSNBC 2/21/2007) Though the original investigation was of the Plame Wilson leak, Fitzgerald says it is important to understand that Libby’s crimes, though not the prime focus of the initial investigation, should be prosecuted as well. “Investigators do not set out to investigate the statute, they set out to gather the facts,” he says. The indictment does not charge Libby with knowingly disclosing the identity of a covert agent. (New York Times 10/28/2005)
Confirms that CIA Agent's Status Classified; Important to National Security - Fitzgerald confirms that the fact of Plame Wilson’s employment at the CIA was in and of itself classified information, and not to be shared to the media or the public. He says: “The fact that she was a CIA officer was not well known, for her protection or for the benefit of all us. It’s important that a CIA officer’s identity be protected, that it be protected not just for the officer, but for the nation’s security.… [T]he damage wasn’t to one person. It wasn’t just Valerie Wilson. It was done to all of us” (see Before September 16, 2003, October 3, 2003, October 11, 2003, October 22-24, 2003, October 23-24, 2003, and February 13, 2006). (New York Times 10/28/2005; Corn 3/16/2007)
Libby Lied about Knowledge of Plame Wilson's Status, Indictment Charges - The indictment charges that Libby lied when he claimed that he learned of Plame Wilson’s CIA status from NBC reporter Tim Russert (see November 24, 2003, March 5, 2004, March 24, 2004, and August 7, 2004). Instead, the indictment charges, Libby learned about Plame Wilson and her possible role in sending her husband, former ambassador Joseph Wilson, to Niger to investigate claims of Iraqi attempts to buy uranium (see February 21, 2002-March 4, 2002) from a number of people, including an undersecretary of state (see June 10, 2003), a CIA officer who regularly briefed him on national security issues (see 2:00 p.m. June 11, 2003), an unidentified “senior CIA officer,” and from his superior, Cheney (see (June 12, 2003)). In his turn, Libby shared that information with several officials in the Office of the Vice President, including Cheney’s senior counsel David Addington (see July 8, 2003), Cheney’s national security adviser John Hannah (see May 29, 2003), and Cheney’s press secretary at the time, Cathie Martin (who may have actually informed Libby—see 5:27 p.m. June 11, 2003). “In fact, Mr. Libby was the first official known to have told a reporter when he talked to Judith Miller in June of 2003 about Valerie Wilson” (see June 23, 2003), Fitzgerald says. “[T]o be frank, Mr. Libby gave the FBI a compelling story,” he adds. “It would be a compelling story that will lead the FBI to go away if only it were true. It is not true, according to the indictment.” (New York Times 10/28/2005; US District Court for the District of Columbia 10/28/2005

; Waas and Singer 10/30/2005) (The unidentified “senior CIA officer” is later revealed to be Frederick Fleitz, who served both as a senior officer at the Weapons Intelligence, Nonproliferation, and Arms Control (WINPAC) desk and as Undersecretary of State John Bolton’s chief of staff—see (June 11, 2003).) (Alexandrovna and Leopold 11/2/2005) Jeralyn Merritt, a criminal defense attorney who writes for the progressive blog TalkLeft, notes that according to the indictment, the phrases used by Libby in his denials to the grand jury were nearly verbatim echoes of Cheney’s own denials as told to NBC’s Tim Russert in September 2003 (see September 14, 2003). (Jeralyn Merritt 10/31/2005)
Sought Information on Plame Wilson's CIA Status - The indictment also charges that Libby sought information from the CIA and the State Department about Plame Wilson’s CIA status, and tried to determine whether she had been responsible for sending her husband to Niger. According to the indictment, Libby asked David Addington, the chief counsel to Cheney, “in sum and substance, what paperwork there would be at the CIA if an employee’s spouse undertook an overseas trip.” The court papers do not say what action, if any, Addington may have taken in response to Libby’s request. (New York Times 10/28/2005; US District Court for the District of Columbia 10/28/2005

; Waas 12/16/2005)
Discussed with Multiple Officials before Leaking to Reporters - In a press conference, Fitzgerald walks reporters and listeners through the indictment: from Libby’s learning of Plame Wilson’s identity from State Department and CIA sources and from Cheney, through his discussing it with at least three White House officials, all before the supposed “disclosure” from Russert. Libby subsequently lied to the FBI and to Fitzgerald’s grand jury about those discussions with government officials and again with Miller and Time reporter Matthew Cooper. “[H]e lied about it afterwards,” Fitzgerald says, “under oath and repeatedly.… [A]nyone who would go into a grand jury and lie, obstruct, and impede the investigation has committed a serious crime.” (New York Times 10/28/2005)
Leak Seriously Jeopardized National Security - Fitzgerald tells reporters that the leaking of a CIA officer’s identity is a serious breach of national security. “This is a very serious matter and compromising national security information is a very serious matter,” he says. “But the need to get to the bottom of what happened and whether national security was compromised by inadvertence, by recklessness, by maliciousness is extremely important.” Fitzgerald continues: “At a time when we need our spy agencies to have people work there, I think just the notion that someone’s identity could be compromised lightly… [discourages] our ability to recruit people and say, ‘Come work for us… come be trained… come work anonymously here or wherever else, go do jobs for the benefit of the country for which people will not thank you.” Senator John D. Rockefeller (D-WV), the ranking Democrat on the Senate Intelligence Committee, says: “Revealing the identity of a covert agent is the type of leak that gets people killed. Not only does it end the person’s career… it puts that person in grave personal danger as well as their colleagues and all the people they have had contact with.” (New York Times 10/28/2005; Waas and Singer 10/30/2005)
Charges Are Serious, Not 'Technicalities' - Responding to a question about Republican charges that Libby is being charged as a “technicality,” and Fitzgerald “overreached” his authority in filing the indictment, Fitzgerald says: “That talking point won’t fly. If you’re doing a national security investigation, if you’re trying to find out who compromised the identity of a CIA officer and you go before a grand jury and if the charges are proven… that the chief of staff to the vice president went before a federal grand jury and lied under oath repeatedly and fabricated a story about how he learned this information, how he passed it on, and we prove obstruction of justice, perjury, and false statements to the FBI, that is a very, very serious matter.… [T]he truth is the engine of our judicial system. And if you compromise the truth, the whole process is lost.… Any notion that anyone might have that there’s a different standard for a high official, that this is somehow singling out obstruction of justice and perjury, is upside down.… If these facts are true, if we were to walk away from this and not charge obstruction of justice and perjury, we might as well just hand in our jobs. Because our jobs, the criminal justice system, is to make sure people tell us the truth. And when it’s a high-level official and a very sensitive investigation, it is a very, very serious matter that no one should take lightly.” (New York Times 10/28/2005)
Explanation for Delay in Filing Indicitment - Fitzgerald gives one reason for the delay in filing the indictment against Libby. When asked why he went to such lengths to compel the testimony of reporters such as Miller (see September 30, 2005) and Cooper (see July 13, 2005), Fitzgerald replies that the rights of the accused are paramount in his mind. The testimony of Miller, Cooper, and other journalists could bolster the case against Libby, or could help exonerate him. The possibility that he might charge someone, only to learn later that one of the journalists who had declined to testify had information to clear the person, was something that “frightens me,” Fitzgerald says. “I think the only way you can do an investigation like this is to hear all eyewitnesses.” (New York Times 10/28/2005; Waas 11/12/2005)
No Charges against Cheney - Asked whether the investigation found evidence of criminal acts by Cheney, Fitzgerald answers: “We make no allegation that the vice president committed any criminal act. We make no allegation that any other people who provided or discussed with Mr. Libby committed any criminal act. But as to any person you asked me a question about other than Mr. Libby, I’m not going to comment on anything.” Fitzgerald refuses to comment on whether White House political strategist Karl Rove or anyone else will be named as co-conspirators, charged, or even named in court. (New York Times 10/28/2005) 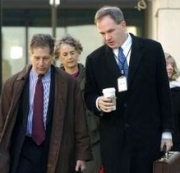