This page can be viewed at http://www.historycommons.org/entity.jsp?entity=free_press_1

Free Press was a participant or observer in the following events: 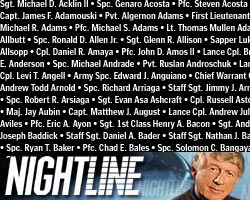 Barry Sussman. [Source: Nieman Watchdog]Former Washington Post editor Barry Sussman, the head of the Nieman Watchdog project at Harvard University, asks a number of pertinent questions about the recently exposed Pentagon propaganda operation that used retired military officers to manipulate public opinion in favor of the Iraq occupation (see April 20, 2008 and Early 2002 and Beyond). Sussman notes that “[t]he story has implications of illegal government propaganda and, possibly, improper financial gains,” and asks the logical question, “So what happened to it?” It is receiving short shrift in the mainstream media, as most newspapers and almost all major broadcast news operations resolutely ignore it (see April 21, 2008, April 24, 2008, and May 5, 2008). Sussman asks the following questions in hopes of further documenting the details of the Pentagon operation:

Does Congress intend to investigate the operation?

Do the three presidential candidates—Democrats Hillary Clinton and Barack Obama, and Republican John McCain, have any comments (see April 28, 2008)?

Since the law expressly forbids the US government to, in reporter David Barstow’s words, “direct psychological operations or propaganda against the American people,” do Constitutional attorneys and scholars have any opinions on the matter? Was the operation a violation of the law? Of ethics? Of neither?

Former Secretary of Defense Donald Rumsfeld created the Office of Strategic Influence in 2001 (see Shortly after September 11, 2001), which was nothing less than an international propaganda operation. Rumsfeld claimed the office had been closed down after the media lambasted it, but later said the program had continued under a different name (see February 20, 2002). Does the OSI indeed still exist?

Did the New York Times wait an undue period to report this story? Could it not have reported the story earlier, even with only partial documentation? Sussman notes: “Getting big stories and holding them for very long periods of time has become a pattern at the Times and other news organizations. Their rationale, often, is that the reporting hasn’t been completed. Is reporting ever completed?”

Many of the military analysts cited in the story have close ties to military contractors and defense firms who make handsome profits from the war. Is there evidence that any of the analysts may have financially benefited from promoting Pentagon and Bush administration policies on the air? Could any of these be construed as payoffs? (Barry Sussman 4/23/2008)