This page can be viewed at http://www.historycommons.org/entity.jsp?entity=george_brent_mickum_1

George Brent Mickum was a participant or observer in the following events:

Joseph Margulies. [Source: PBS]Joseph Margulies, a law professor at Northwestern University, and lawyer George Brent Mickum write of their plans to meet with Guantanamo detainee Abu Zubaida (see March 28, 2002) as part of his legal defense team. The lawyers write: “Zubaydah’s world became freezing rooms alternating with sweltering cells. Screaming noise replaced by endless silence. Blinding light followed by dark, underground chambers. Hours confined in contorted positions. And, as we recently learned, Zubaydah was subjected to waterboarding. We do not know what remains of his mind, and we will probably never know what he experienced.” What exactly the CIA did to Zubaida may never be determined, as the agency destroyed the videotapes of his interrogations (see Spring-Late 2002). Zubaida’s subsequent confessions to FBI agents are essentially meaningless, the lawyers assert, because his will and mind were already irrevocably broken by the time of the FBI interviews. The lawyers hope to piece together what Zubaida knew and what was done to him, although they are not confident they will be given the documentation necessary to find out what they want to know. They fear that, if they are not able to learn the truth of Zubaida’s participation with al-Qaeda and the interrogation methods he was subjected to, then in his and others’ cases, the truth will be “only what the administration reports it to be. We hope it has not come to that.” (Margulies and Mickum 2/23/2008) 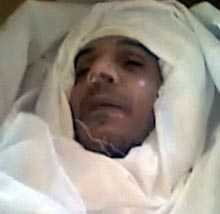 Ibn al-Shaykh al-Libi’s body, shortly after he died. [Source: Public domain]Ibn al-Shaykh al-Libi, a former manager of a training camp for militants in Afghanistan, dies at Al Saleem jail in Libya. Al-Libi was captured and handed over to the US in 2001 (see December 19, 2001), and later provided information falsely linking Iraq and al-Qaeda while being tortured in Egyptian custody (see February 2002). The story of his death is broken by a Libyan newspaper named Oea, and picked up by media around the world. However, Newsweek will point out that Oea has “close ties to the [Libyan] government,” as it is owned by a son of Libyan dictator Colonel Mu’ammar al-Qadhafi. Workers with Human Rights Watch visited al-Libi at the prison on April 27, and spoke to him briefly, finding him reasonably well. Hafed al-Ghwell, a leading critic of the al-Qadhafi regime, will comment, “This idea of committing suicide in your prison cell is an old story in Libya.” Apparently, sometimes a prisoner is reported to have committed suicide, but when the family gets the body back, there is a bullet hole in its back or signs of torture. George Brent Mickum, a US lawyer representing al-Libi’s former partner in the training camp, US-held detainee Abu Zubaidah, says he had recently begun efforts through intermediaries to arrange to talk to al-Libi. “The timing of this is weird,” Mickum says. “My gut feeling is that something fishy happened here and somebody in Libya panicked,” adds al-Ghwell. (Isikoff and Hosenball 5/12/2009) Tom Malinowski of Human Rights Watch says: “I would speculate that he was missing because he was such an embarrassment to the Bush administration. He was Exhibit A in the narrative that tortured confessions contributed to the massive intelligence failure that preceded the Iraq war.” After the Bush administration used al-Libi’s claims of links between al-Qaeda and the Iraqi government to justify the US invasion of Iraq in 2003, al-Libi withdrew the claims. (Finn 5/12/2009) In October 2009, in a video posted on an Islamist website, al-Qaeda deputy leader Ayman al-Zawahiri will claim the US government “handed him over to the agents of al-Qadhafi to continue torturing him and kill him.” (Reuters 10/4/2009)