This page can be viewed at http://www.historycommons.org/entity.jsp?entity=gerald_burke_1

Gerald Burke was a participant or observer in the following events: 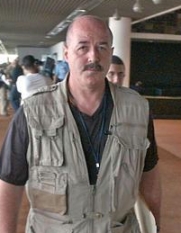 Bernard Kerik in the Green Zone, July 2003. [Source: Associated Press / Dario Lopez-Mills]Former New York City police commissioner, Bernard Kerik, the newly appointed head of Iraq’s Interior Ministry and the man chosen to rebuild Iraq’s police forces (see Early May, 2003), does not make a strong impression on the State Department’s Robert Gifford, a senior adviser to the Interior Ministry and an expert on international law enforcement. Kerik is in Iraq to take over Gifford’s job. He tells Gifford that his main function is to “bring more media attention to the good work on police,” and he doubts “the situation is… as bad as people think it is.” When Gifford briefs Kerik, he quickly realizes that Kerik isn’t listening. “He didn’t listen to anything,” Gifford will later recall. “He hadn’t read anything except his e-mails. I don’t think he read a single one of our proposals.” Kerik is not in Baghdad to do the heavy lifting of leading the rebuilding. He intends to leave that to Gifford. Kerik will brief American officials and reporters. And, he says, he will go out on some law enforcement missions himself. Kerik garners much network air time by telling reporters that he has assessed the situation in Iraq and it is improving. Security in Baghdad, he says, “is not as bad as I thought. Are bad things going on? Yes. But is it out of control? No. Is it getting better? Yes.” He tells a Time reporter that “people are starting to feel more confident. They’re coming back out. Markets and shops that I saw closed one week ago have opened.” Kerik parades around the Green Zone with a team of South African mercenaries as his personal bodyguard force, and packs a 9mm handgun under his safari vest.
Ignoring Basic Processes - The first few months after the overthrow of the Hussein government are a critical time. Police officers need to be called back to work and screened for Ba’ath Party connections. They must be retrained in due process, in legal (non-torture) interrogation procedures, and other basic law enforcement procedures. New police chiefs need to be selected. Tens of thousands of new police officers must be hired and trained. But Kerik has no interest in any of this. He only holds two staff meetings, and one of these is a show for a New York Times reporter. Kerik secures no funding for police advisers. He leaves the chores of organizing and training Iraqi police officers to US military policemen, most of whom have no training in civilian law enforcement. Gerald Burke, a former Massachusetts State Police commander who participated in the initial Justice Department assessment mission, will later say: “He was the wrong guy at the wrong time. Bernie didn’t have the skills. What we needed was a chief executive-level person.… Bernie came in with a street-cop mentality.”
Night Adventures - What Kerik does do is organize a hundred-man Iraqi police paramilitary unit to chase down and kill off members of the black market criminal syndicates that have sprung up after the invasion. He often joins the group on nighttime raids, leaving the Green Zone at midnight and returning at dawn, appearing at CPA administrator L. Paul Bremer’s morning staff meetings to regale his audience with tales of the night’s adventures. Kerik’s hit squad does put a few car-theft and kidnapping gangs out of business, and Kerik makes sure to get plenty of press coverage for these successes. But he leaves the daily work of rebuilding the Iraqi police to others: he sleeps during the day so he can go out at night. Many members of the Interior Ministry become increasingly distressed at Kerik’s antics and his systematic ignorance of his duties, but realize that they can do nothing. “Bremer’s staff thought he was the silver bullet,” a member of the Justice Department assessment mission will later say. “Nobody wanted to question the [man who was] police chief during 9/11.” When Kerik leaves three months later, virtually nothing has been done to rebuild Iraq’s police forces. (Kerik will blame others for the failures, saying he was given insufficient funds to hire police advisers or to establish large-scale training programs.) He will later recall his service in Baghdad: “I was in my own world. I did my own thing.” (Chandrasekaran 9/17/2006)
'Irresponsible' - In 2007, Senator John McCain (R-AZ) will say that Kerik was “irresponsible” in his tenure as head of Iraq’s Interior Ministry (see November 9, 2007). “Kerik was supposed to be there to help train the police force,” McCain will say. “He stayed two months and one day left, just up and left.” (Associated Press 11/9/2007)