This page can be viewed at http://www.historycommons.org/entity.jsp?entity=global_protection_against_limited_strikes_1

Global Protection Against Limited Strikes (GPALS) was a participant or observer in the following events: 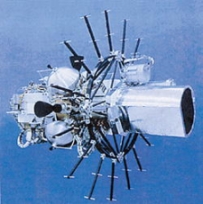 An ‘exo-atmospheric kill vehicle,’ or EKV, part of the ‘Brilliant Pebbles’ space-based missile defense system. [Source: Claremont Institute]In his State of the Union address, President Bush announces a drastic revision of the controversial Strategic Defense Initiative (SDI, or “Star Wars”) missile defense system (see March 23, 1983). The system, still in its research and development stages, will no longer attempt to protect the majority of the US population from nuclear assault. Now, Bush says, SDI will be retooled to “provid[e] protection against limited ballistic missile strikes—whatever their source.” The system, called Global Protection Against Limited Strikes (GPALS), will include some 1,000 space-based “Brilliant Pebbles” interceptors, 750 to 1,000 long-range ground-based interceptors at six sites, space-based and mobile sensors, and transportable ballistic missile defenses. (Federation of American Scientists 1/15/2008) The concept is based on an earlier proposal by nuclear weapons experts Edward Teller, Lowell Wood, and Gregory Canavan of the Lawrence Livermore National Laboratory, who came up with the idea of a “Smart Rocks” defense system based on thousands of small rocket-propelled canisters in Earth orbit, each capable of ramming an incoming ballistic missile and exploding it outside the lower atmosphere. The “Smart Rocks” concept was one component of the original SDI concept, but was retooled, upgraded, and renamed “Brilliant Pebbles” to be the main component of the program. It will never be deployed, and will be defunded entirely during the first year of the Clinton administration. (Claremont Institute 12/24/2007)