This page can be viewed at http://www.historycommons.org/entity.jsp?entity=haji_zaman_ghamsharik

Haji Zaman Ghamsharik was a participant or observer in the following events:

Hazrat Ali. [Source: Robert Nickelsberg / Getty Images]Hazrat Ali and Haji Zaman Ghamsharik, warlords in the Tora Bora region of Afghanistan, both later claim that they are first approached in the middle of November by US officers and asked to take part in an attack on Tora Bora. They agree. (Smucker 3/4/2002) By late November, the US-allied warlords assemble a motley force of about 2,500 Afghans supported by a fleet of old Russian tanks at the foot of the Tora Bora mountains. They are poorly equipped and trained and have low morale. The better-equipped Taliban and al-Qaeda are 5,000 feet up in snow-covered valleys, forests, and caves. (Weaver 9/11/2005) On December 3, a reporter for the Christian Science Monitor overhears Ali in a Jalalabad, Afghanistan, hotel making a deal to give three al-Qaeda operatives safe passage out of the country. (Smucker 3/4/2002) The US chooses to rely mainly on Hazrat Ali’s forces for the ground offensive against Tora Bora. Ali supposedly pays one of his aides $5,000 to block the main escape routes to Pakistan. But in fact this aide helps Taliban and al-Qaeda escape along these routes. Afghan villagers in the area later even claim that they took part in firefights with fighters working for Ali’s aide who were providing cover to help al-Qaeda and Taliban escape. (Smucker 3/4/2002) Author James Risen later claims, “CIA officials are now convinced that Hazrat Ali’s forces allowed Osama bin Laden and his key lieutenants to flee Tora Bora into Pakistan. Said a CIA source, ‘We realized those guys just opened the door. It wasn’t a big secret.’” While the US will never publicly blame Ali for assisting in the escape, the CIA will internally debate having Ali arrested by the new Afghan government. But this idea will be abandoned and Ali will become the new strongman in the Jalalabad region. (Risen 2006, pp. 168-169) CIA official Michael Scheuer later will comment, “Everyone who was cognizant of how Afghan operations worked would have told Mr. Tenet that [his plan to rely on Afghan warlords] was nuts. And as it turned out, he was.… The people we bought, the people Mr. Tenet said we would own, let Osama bin Laden escape from Tora Bora in eastern Afghanistan into Pakistan.” (Scheuer 6/20/2006) 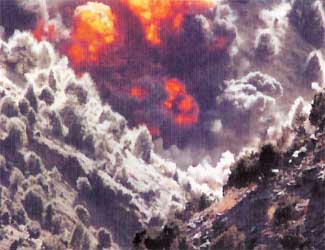 A US airstrike in the Tora Bora region. [Source: Gary Bernsten]Heavy US bombing of Tora Bora, the Taliban and al-Qaeda mountainous stronghold near the Pakistani border, begins. A large convoy containing bin Laden and other al-Qaeda leaders arrived in Tora Bora about three day earlier. The son of a tribal elder later recalls, “At first, we thought that the US military was trying to frighten the Arabs out, since they were only bombing from one side.” Rather than send in US ground forces in large numbers, the US chooses to supply two local warlords and have their fighters do most of the fighting while heavy bombing continues. Within days, a small number of US special forces are brought in to assist the local warlords. One of the warlords chosen, Haji Zaman Ghamsharik, was actually living in exile in France and has to be flown to Afghanistan. He is “known to many as a ruthless player in the regional smuggling business.” Between 1,500 to 2,000 of bin Laden’s fighters are in Tora Bora when the battle begins. (Smucker 3/4/2002; Brown 10/20/2002) There are two main mountain passes out of Tora Bora and into Pakistan. From the beginning on this day, eyewitnesses report that the US bombs only one pass. (Nordland, Yousafzai, and Dehghanpisheh 8/11/2002) The fighting and bombing will continue through early December (see December 5-17, 2001) while bin Laden and most of his forces escape via the other pass (see November 28-30, 2001). 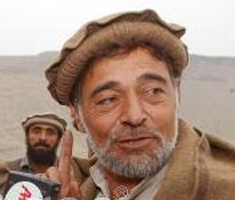 Haji Zaman Ghamsharik speaking to reporters on December 16, 2001. [Source: Chris Hondros / Getty Images]US-allied warlord Haji Zaman Ghamsharik makes radio contact with some al-Qaeda commanders in Tora Bora and offers a cease-fire so bin Laden can negotiate a surrender. The other US-allied warlord, Hazrat Ali, is also in secret talks with al-Qaeda and acquiesces to the deal. The US military is reportedly furious, but the fighting stops for the night. US intelligence later concludes that about 800 al-Qaeda fighters escape Tora Bora that night during the cease fire. (Weaver 9/11/2005) Other rival Afghan commanders in the area later accuse Ghamsharik of accepting a large bribe from al-Qaeda so they can use the cease fire to escape. (Burns 9/30/2002) There are other accounts that the US-allied warlords helped instead of hindered al-Qaeda (see Mid-November 2001-Mid-December 2001).