This page can be viewed at http://www.historycommons.org/entity.jsp?entity=hassan_almrei

Positions that Hassan Almrei has held:

Hassan Almrei was a participant or observer in the following events:

Hassan Almrei. [Source: Darren Ell]On January 2, 1999, Hassan Almrei entered Canada and applied for political refugee status. He claimed his passport from the United Arab Emirates (UAE) had been destroyed. He was given refugee status in June 2000. However, for unknown reasons Canadian officials begin investigating him. Immigration officials search his Toronto apartment on September 13, 2000. They discover the UAE passport that Almrei had claimed was destroyed, and determine it is fradulent. (Canadian Security Intelligence Service 2/22/2008

) Almrei and al-Marabh are roommates at some point, probably in early 2001 (see January 2001-Summer 2001). It is probable that Canadian officials increase their interest in Almrei in the months before 9/11. A top Canadian intelligence (CSIS) official will later claim that Canadian authorities grew increasingly worried that a group of eight terrorists would attack Toronto around the time of 9/11. But there was not enough evidence to arrest them, so different means were used in an attempt to disrupt the plot. While these eight suspected terrorists have not been publicly named, it is likely one of them is Almrei. In 2008, Canadian intelligence officials will reveal that at some point they learned that in September 1999 Almrei and five others gained access to a restricted area at Toronto’s Pearson International Airport. Almrei and the others appeared to have access cards and codes for restricted areas. Furthermore, Almrei will be arrested one month after 9/11 (see October 19, 2001) and photos of a security badge and airplane cockpit will be found on his computer. (Canadian Security Intelligence Service 2/22/2008

Ahmed Shehab. [Source: Ahmedshehab.com]The landlord and at least twelve tenants of a Toronto high rise building see 9/11 hijacker Marwan Alshehhi living there in the spring of 2001. Other witnesses recall seeing Alshehhi and/or hijacker Mohamed Atta in or near the building. Nabil al-Marabh is sporadically staying in the same building in an apartment unit owned by his uncle, Ahmed Shehab, a prominent local imam. None of the witnesses appear to have sighted any of the other hijackers. Alshehhi and Atta are also seen by eyewitnesses around this time at a Toronto photocopy shop owned by Shehab, and there are even some who see Atta occasionally working there (see January 2001-Summer 2001). (Botchford and Godfrey 9/28/2001; Botchford and Godfrey 9/28/2001; ABC News 7 (Chicago) 1/31/2002) The apartment where al-Marabh stayed will not be raided by police until about two weeks after 9/11, and one week after reports of al-Marabh’s connections to the hijackers has been in the newspapers. The Toronto Sun will report, “Many [building] residents questioned why police waited so long to raid [the] apartment after al-Marabh was arrested. Several tenants alleged they had seen a man late at night during the past week, taking away boxes from the apartment.” (Botchford and Godfrey 9/28/2001) Al-Marabh also shares a Toronto apartment with Hassan Almrei, a Syrian who the Canadian authorities are already suspecting for possible militant ties (see September 13, 2000 and After). One article says that are roommates in 2001, and it would likely mean early 2001 since al-Marabh leaves Toronto during the summer. Canadian authorities will later arrest Almrei and discover that he has extensive connections with al-Qaeda (see October 19, 2001). (ABC News 7 (Chicago) 1/31/2002) Some of the 9/11 hijackers may have been in Toronto as late as the end of August 2001. A motel manager in Hollywood, Florida, will later say that Mohamed Atta and Ziad Jarrah stay at his motel on August 30, 2001. He will say they gave a non-existent Toronto address and drove a car with Ontario, Canada, license plates. They claimed to be computer engineers from Iran, and said they had just come down from Canada to find jobs. (Fallis and Cha 10/4/2001; Godfrey 10/5/2001)

Shortly Before July 11, 2001: Canadian Officials Release Al-Marabh from Prison Despite His Links to Suspected Militants 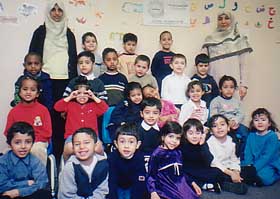 Children at the Um Al-Qura Islamic School, where both Jaballah and Shehab served as principals. [Source: Um Al-Qura Islamic School]On June 27, 2001, Nabil al-Marabh was arrested while trying to enter the US from Canada. He is already wanted in the US for skipping bail on an attempted murder charge, and US intelligence has linked him to al-Qaeda (see June 27, 2001-July 11, 2001). He is held in Canada. About two weeks after his arrest, there is a court hearing to determine if he should be released. His lawyer argues that he should be released because his uncle, Ahmed Shehab, can keep him in line. The lawyer does not mention that Shehab works at a school headed by Mahmoud Jaballah. Canadian intelligence has been closely monitoring Jaballah since 1996 and has overheard him communicating with many top militant leaders, including al-Qaeda number two Ayman al-Zawahiri (see May 11, 1996-August 2001 and February 1998). Presumably Canadian intelligence is well aware of Jaballah’s job at the school discussed in the hearing, yet this is never mentioned to the judge. Jaballah had been arrested in 1999 for suspected ties to Islamic militants and then released, and his school job had been mentioned in media reports. In August 2001, he will be arrested again, and Shebab will replace him as principal at the school. (Sallot and Oziewicz 11/4/1999; Risen and Engelberg 10/14/2001; Shephard 7/17/2004) While in jail, al-Marabh is visited by Hassan Almrei, who had been his roommate earlier in the year (see October 19, 2001). (Fennell 12/10/2001) Almrei will also later testify that in 1995 he obtained a false passport for al-Marabh, and that after al-Marabh’s arrest in June 2001, al-Marabh asked him to obtain a second false passport for him. (Canadian Security Intelligence Service 2/22/2008

) Canadian authorities were investigating Almrei since at least September 2000, and may have suspected his role in a plot against the Toronto airport by this time (see January 2001-Summer 2001). But authorities either do not notice al-Marabh’s links to Jaballah and/or Almrei or do not care, because he is released on bail on July 11 and immediately disappears.

Hassan Almrei. [Source: Public domain via CBC]Hassan Almrei, a Syrian national and an associate of Nabil al-Marabh, is arrested in Canada. He was al-Marabh’s Toronto apartment roommate in early 2001. Canadian authorities say Almrei’s honey and perfume business in the Middle East helped finance al-Qaeda. Following a raid on his apartment, police say they confiscated computers and disks that hold information about Osama bin Laden, numerous images of bin Laden and other al-Qaeda members, a hijacking planner, diagrams of plane cockpits and military weapons, and copies of passports and official IDs. Within a week of his arrest, the Canadian government declares Almrei a “threat to national security” and announces its intention to deport him to Syria. The Federal Court of Canada will later agree with investigators that Almrei is a “a member of an international network of extremist individuals who support the Islamic extremist ideals espoused by Osama bin Laden,” and was “involved in a forgery ring with international connections that produces false documents.” The court will approve his deportation. (Canadian Broadcasting Corporation 10/27/2001; Godfrey 1/14/2002; ABC News 7 (Chicago) 1/31/2002) Almrei will admit to attending training camps in Afghanistan and lying about his past to get into Canada as a refugee claimant in 1999, but will deny any link to al-Qaeda. As of late 2005, he will still be in a Canadian prison, appealing his deportation. He will say he fears death or torture if he is returned to Syria. (Toronto Sun 10/20/2005) Almrei will be released from prison in Canada in December 2009 when he wins an appeal against the security certificate he is being held under. The judge, Justice Richard Mosley, says there were “reasonable grounds to believe that Hassan Almrei was a danger to the security of Canada when he was detained in 2001, [but] there are no longer reasonable grounds to believe that he is a security risk today.” (Shephard 12/15/2008)