This page can be viewed at http://www.historycommons.org/entity.jsp?entity=helen_thomas_1

Helen Thomas was a participant or observer in the following events:

Martha Mitchell. [Source: Bettmann / Corbis]Martha Mitchell, the wife of Nixon campaign director John Mitchell, makes an unexpected phone call to UPI reporter Helen Thomas. Mrs. Mitchell is initially calm and even a bit sad, but when Thomas brings up the subject of Watergate, Mrs. Mitchell becomes agitated. She is “sick of the whole business,” she says, and adds: “I’ve given John an ultimatum. I’m going to leave him unless he gets out of the campaign. I’m sick and tired of politics. Politics is a dirty business.” (Thomas 1999, pp. 210-211) Suddenly she screams, “You just get away—get away!” and the line goes dead. (Reeves 2001, pp. 508) Three days later she calls Thomas again and asserts that she is a political prisoner in her own home. “I’m not going to stand for all of those dirty things that go on,” she shouts. “If you could see me, you wouldn’t believe it. I’m black and blue.” Washington Post reporter Bob Woodward believes that Mrs. Mitchell might be an unexpected fount of information about her husband’s inner dealings in the Watergate conspiracy, but when he interviews her in September, she will reveal nothing of import. (Bernstein and Woodward 1974, pp. 92-95) In October 1972, W. Mark Felt, Washington Post reporter Bob Woodward’s FBI background source (see May 31, 2005), says of Mrs. Mitchell, “She knows nothing, apparently, but that doesn’t mean she won’t talk.” (Bernstein and Woodward 1974, pp. 133)

September 22, 2003 and After: Bush Does Not Read News, Relies on Briefings from Two Advisers

In an interview with Fox News’s Brit Hume, President Bush admits that he does not read news articles himself. Instead, he gets briefings from staff members. “I get briefed by Andy Card and Condi [Rice] in the morning. They come in and tell me.… I glance at the headlines just to kind of a flavor for what’s moving. I rarely read the stories, and get briefed by people who are probably read [sic] the news themselves. But like Condoleezza, in her case, the national security adviser is getting her news directly from the participants on the world stage.” It has been his “[p]ractice since day one,” he says.
His Staffers Best Source for 'Objective' News - “You know, look, I have great respect for the media. I mean, our society is a good, solid democracy because of a good, solid media. But I also understand that a lot of times there’s opinions mixed in with news. And I… I appreciate people’s opinions, but I’m more interested in news. And the best way to get the news is from objective sources. And the most objective sources I have are people on my staff who tell me what’s happening in the world.” (Fox News 9/22/2003)
'Filtered or Unfiltered' - The reaction from the media is quite critical. Slate’s Michael Kinsley writes: “To President Bush, the news is like a cigarette. You can get it filtered or unfiltered.… When he is trying to send a message to the public, Bush prefers to have it go out unfiltered. But when he is on the receiving end, Bush prefers his news heavily filtered.… George W. Bush doesn’t really want people to get the news unfiltered. He wants people to get the news filtered by George W. Bush. Or rather, he wants everyone to get the news filtered by the same people who apparently filter it for him. It’s an interesting epistemological question how our president knows what he thinks he knows and why he thinks it is less distorted than what the rest of us know or think we know. Every president lives in a cocoon of advisers who filter reality for him, but it’s stunning that this president actually seems to prefer getting his take on reality that way.” (Kinsley 10/16/2003)
'Sugar Coating' the News - Washington institution Helen Thomas, a long-time critic of the Bush administration, writes: “Bush is spoon-fed the relevant news from his staff. Top aides usually know the buttons not to push when it comes to bad news. More often they will tell the president what he wants to hear—the good news if there is any. Or they may just sugar coat the news that is tougher to swallow.” (Thomas 10/15/2003) 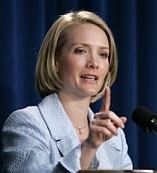 Dana Perino. [Source: Associated Press]White House spokeswoman Dana Perino reacts with confusion to Vice President Dick Cheney’s recent assertions that the vice president is neither wholly part of the executive nor legislative branches (see 2003 and June 21, 2007). Perino says in response to reporters’ questions: “I’m not a legal scholar… I’m not opining on his argument that his office is making… I don’t know why he made the arguments that he did.” Reporter Keith Koffler remarks, “It’s a little surreal,” to which Perino replies, “You’re telling me.” Koffler presses, “You can’t give an opinion about whether the vice president is part of the executive branch or not? It’s a little bit like somebody saying, ‘I don’t know if this is my wife or not.’” Asked if President Bush believes Cheney is part of the executive branch, Perino sidesteps, calling it “an interesting constitutional question.” After further dodging, reporter Helen Thomas says, “You’re stonewalling.” Reporter Jim Axelrod suggests Perino is denying “sky-is-blue stuff” and points out that Cheney’s assertion revises “more than 200 years of constitutional scholarship.” Koffler continues, “He can’t possibly argue that he’s part of neither [branch], and it seems like he’s saying he’s part of neither.” Perino finally surrenders, “Okay, you have me thoroughly confused as well.” Cheney’s current position—he will not comply with an order governing the care of classified documents because the vice presidency is not “an entity within the executive branch”—contradicts his 2001 argument that he would not cooperate with a Congressional probe into the activities of his Energy Task Force because such a probe “would unconstitutionally interfere with the functioning of the executive branch.”
'Neither Fish Nor Fowl' - The Washington Post’s Dana Milbank writes, “Cheney has, in effect, declared himself to be neither fish nor fowl but an exotic, extraconstitutional beast who answers to no one.” Senator Charles Schumer (D-NY) agrees, saying: “The vice president’s theory seems to be one almost laughable on its face, that he’s not part of the executive branch. I think if you ask James Madison or Benjamin Franklin or any of the writers of the Constitution, they’d almost laugh if they heard that.” (Milbank 6/26/2007; Dreazen 7/31/2007) Interestingly, Perino does assert that Henry Waxman (D-CA), chairman of the House Oversight and Government Reform Committee, has no standing to investigate the compliance of the vice president’s office with the executive order. “The executive order is enforced solely by the president of the United States,” she says. “I think this is a little bit of a non-issue.” The government watchdog organization Citizens for Responsibility and Ethics in Washington (CREW) retorts that, if Cheney and Perino are to be believed, then the Office of Senate Security, the counterpart to Waxman’s committee, should investigate Cheney’s office. “By claiming the Office of the Vice President is within the legislative branch does Mr. Cheney agree that he is subject to Senate security procedures?” CREW executive director Melanie Sloan asks. “The Security Office’s standards, procedures and requirements are set out in the Senate Security Manual, which is binding on all employees of the Senate.” (Roston 6/24/2007)

April 30, 2008: For ‘Mission Accomplished’ Anniversary, White House Says that Banner Had Nothing to Do with Bush Speech 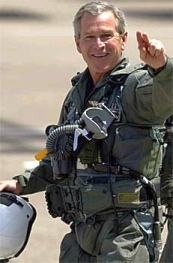 Bush, wearing his flight suit, before giving the ‘Mission Accomplished’ speech. [Source: MSNBC]Reporter Helen Thomas, the grande dame of Washington reporters who is not popular with the Bush administration, asks White House spokesman Dana Perino about the five-year anniversary of President Bush’s declaration of “Mission Accomplished” in Iraq (see April 20, 2008 and Early 2002 and Beyond). Thomas asks, “How does the president intend to commemorate ‘Mission Accomplished’ after five years of death and destruction?” Perino responds with the explanation that the banner was merely to acknowledge the completion of the mission of the aircraft carrier on which the ceremony was conducted. “President Bush is well aware that the banner should have been much more specific and said ‘mission accomplished for these sailors who are on this ship on their mission,’” Perino says. “And we have certainly paid a price for not being more specific on that banner. And I recognize that the media is going to play this up again tomorrow, as they do every single year.” (CBS News 10/29/2003; White House 4/30/2008)