This page can be viewed at http://www.historycommons.org/entity.jsp?entity=house_rules_committee_1

House Rules Committee was a participant or observer in the following events: 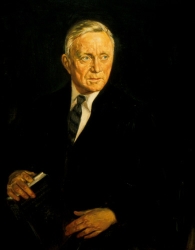 Official portrait of Justice William O. Douglas. [Source: Oyez.org]After the second of President Richard Nixon’s conservative Supreme Court nominees is rejected by Congress (see May 14, 1969), House Minority Leader Gerald Ford (R-MI) leads an unsuccessful fight to impeach Justice William O. Douglas. Nixon, through White House aide John Ehrlichman, mobilizes Ford to go after Douglas, presumably in retaliation for the rejection of Clement Haynsworth and G. Harrold Carswell. When legal scholars say that Douglas’s unconventional views and behavior come nowhere near constituting grounds for impeachment, Ford says that “an impeachable offense is whatever a majority of the House of Representatives considers it to be in a given moment in history.” Ford uses unusually strong language (for him) in denouncing Douglas; he questions Douglas’s association with a charitable foundation, his association with the “leftish” Center for the Study of Democratic Institutions, and blasts Douglas’s most recent book, Points of Rebellion, saying that it gives “legitimacy to the militant hippie-yippie movement” and is little more than an incitement to rebellion. (Ford is particularly outraged by the recent publication of an excerpt of Douglas’s book in Evergreen magazine, an excerpt preceded by photographs of nudes that Ford calls “hardcore pornography.” Ford expresses his moral outrage by ensuring that his colleagues have the chance to view every photograph.) Although Ford does enough in-chamber logrolling to get the matter working in the House Rules Committee, two weeks later Nixon abruptly backs off, leaving Ford, in the words of author Barry Werth, “to look foolishly partisan.” (Time 4/27/1970; Werth 2006, pp. 233-234)