This page can be viewed at http://www.historycommons.org/entity.jsp?entity=hunter_s__thompson_1

Hunter S. Thompson was a participant or observer in the following events: 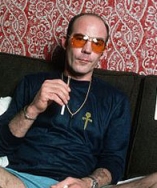 Hunter S. Thompson, in a 1977 photo. [Source: Guardian]Hunter S. Thompson, writer and “gonzo” journalist, dies in an apparent suicide by gunshot. The day before, he had told a friend at the Toronto Globe and Mail that he had found evidence of explosives used in the collapse of the WTC on 9/11, and that he was worried for his safety. “Hunter telephoned me on Feb. 19, the night before his death,” the friend says. “He sounded scared.… He’d been working on a story about the World Trade Center attacks and had stumbled across what he felt was hard evidence showing the towers had been brought down not by the airplanes that flew into them but by explosive charges set off in their foundations. Now he thought someone was out to stop him publishing it: ‘They’re gonna make it look like suicide,’ he said.” The friend continues: “That’s how I imagine a tribute to Hunter S. Thompson should begin. He was indeed working on such a story, but it wasn’t what killed him.” (Roberts 2/26/2005) Thompson was in considerable pain from medical ailments and had been opening talking with friends about committing suicide. He wrote a suicide note four days earlier. (Brinkley 9/8/2005)