This page can be viewed at http://www.historycommons.org/entity.jsp?entity=hussein_kamel

Positions that Hussein Kamel has held:

Hussein Kamel was a participant or observer in the following events:

Hussein Kamel. [Source: Associated Press]Hussein Kamel, Iraq’s former minister of military industry—who was Saddam Hussein’s son-in-law and who had overseen Iraq’s nuclear, chemical, biological and missile weapons programs for almost a decade—is interviewed shortly after defecting by UNMOVIC Executive Chairman Rolf Ekeus, Professor Maurizio Zifferero, deputy director of the Internal Atomic Energy Agency,and Nikita Smidovick of UNSCOM. During the interview, Kamel says that Iraq had destroyed all of its banned weapons after the First Gulf War. “I ordered destruction of all chemical weapons. All weapons—biological, chemical, missile, nuclear were destroyed,” he tells his interviewers. With regard to Anthrax, which Kamel says had been the “main focus” of Iraq’s biological program, Kamel says, “nothing remained.” Regarding the nerve gas, VX, Kamel says, “they put it in bombs during last days of the Iran-Iraq war. They were not used and the program was terminated.” When asked if the program had been reconstituted, Kamel replies, “We changed the factory into pesticide production. Part of the establishment started to produce medicine… We gave instructions not to produce chemical weapons.” On the issue of prohibited missiles, Kamel states: “[N]ot a single missile left but they had blueprints and molds for production. All missiles were destroyed.” Kamel also says that inspections worked in Iraq. “You have important role in Iraq with this. You should not underestimate yourself. You are very effective in Iraq,” he reveals. (Kamal 8/22/1995

) But this information is not made public. Newsweek reports in March 2003 that according to its sources, “Kamel’s revelations about the destruction of Iraq’s WMD stocks were hushed up by the UN inspectors… for two reasons. Saddam did not know how much Kamel had revealed, and the inspectors hoped to bluff Saddam into disclosing still more.” (Cornwell 2/24/2003; Barry 3/3/2003) Kamel also says that Khidir Hamza, an Iraqi nuclear scientist who defected in 1994 and who will be a source for claims regarding Iraq’s alleged nuclear weapons program in the lead-up to the 2003 invasion of Iraq, is “a professional liar.” He tells his interviewers, “He worked with us, but he was useless and always looking for promotions.… He consulted with me but could not deliver anything.… He was even interrogated by a team before he left and was allowed to go.” (Massing 2/26/2004) At around the same time, Kamel is also interviewed by the CIA and Britain’s MI6. According to sources interviewed by Newsweek, Kamel provides them with the same information. (Cornwell 2/24/2003; Barry 3/3/2003 Sources: Unnamed sources) But after this is revealed on February 24, 2003 by Newsweek’s John Barry, the CIA issues a strong denial. “It is incorrect, bogus, wrong, untrue,” CIA spokesman Bill Harlow will say. (Reuters 2/24/2003)

Khidir Hamza. [Source: Radio Bremen]Khidir Hamza, “who played a leading role in Iraq’s nuclear weapon program before defecting in 1994,” tells the Senate Judiciary Committee that according to German intelligence, Iraq has “more than 10 tons of uranium and one ton of slightly enriched uranium… in its possession” which would be “enough to generate the needed bomb-grade uranium for three nuclear weapons by 2005.” He says that Iraq is “using corporations in India and other countries to import the needed equipment for its program and channel it through countries like Malaysia for shipment to Iraq.” He also claims that Iraq is “gearing up to extend the range of its missiles to easily reach Israel.” The testimony is widely reported in the media. (CNN 8/1/2002; Borger 8/1/2002; Harnden 8/1/2002) Hamza, however, is considered by many to be an unreliable source. David Albright, president of the Institute for Science and International Security where Hamza worked as an analyst from 1997 to 1999, says that after Hamza defected “he went off the edge” and “started saying irresponsible things.” (Collier 10/12/2002; Massing 2/26/2004) And General Hussein Kamel, Saddam Hussein’s son-in-law who was in charge of the dictator’s former weapons program but who defected in 1995, told UNSCOM and IAEA inspectors at the time of his defection, as well as US and British intelligence, that Hamza was not a reliable source (see August 22, 1995). (Kamal 8/22/1995

; Hersh 5/12/2003) The International Atomic Energy Agency (IAEA) will say in 2004 that before the US invasion of Iraq, it had warned journalists reporting on Iraq’s alleged nuclear weapons program that Hamza was not a credible source. “Hamza had no credibility at all. Journalists who called us and asked for an assessment of these people—we’d certainly tell them.” (Massing 2/26/2004 Sources: Unnamed IAEA staff member)

October 7, 2002: Bush Uses Groundless Evidence to Tout Hussein as a Direct Threat to US 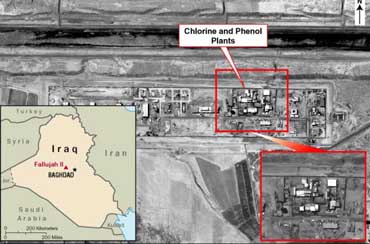