This page can be viewed at http://www.historycommons.org/entity.jsp?entity=ibrahim_ahmed_mahmoud_al-qosi

Ibrahim Ahmed Mahmoud al-Qosi was a participant or observer in the following events:

July 3, 2003: US Government Announces Names of Six Detainees to Be Tried Before a Military Commission

Feroz Abbasi. [Source: BBC]The US government announces that President Bush has named six Guantanamo detainees to be tried before a military commission. They are David Hicks from Australia, Moazzam Begg holding dual British and Pakistan nationality, Feroz Abbasi from Britain, Salim Ahmed Hamdan and Ali Hamza Ahmad Sulayman al-Bahlul, both from Yemen, and Ibrahim Ahmed Mahmoud al-Qosi from Sudan. (US Department of Defense 7/3/2003)

August 2004: 15 Guantanamo Detainees Singled Out for Trial by Military Commission 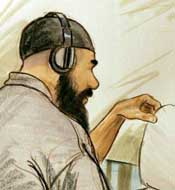 An artist’s drawing of Ibrahim Ahmed Mahmoud al-Qosi appearing before a military commission on August 27, 2004. [Source: Art Lien/ Getty Images]The number of Guantanamo detainees charged with a crime and singled out for trial by military commission reaches 15. However, for the time being, hearings are scheduled for only four of them—David Hicks, Ali Hamza Ahmad Sulayman al-Bahlul, Ibrahim Ahmed Mahmoud al-Qosi, and Salim Ahmed Hamdan. All are charged with conspiracy, except for Australian David Hicks, who is also charged with attempted murder and aiding the enemy. (Lewis 8/25/2004)

The US Justice and Defense Departments announce that five detainees are to be moved from Guantanamo to New York, where they will face trial in ordinary civilian courts for the 9/11 attacks. The five are alleged 9/11 mastermind Khalid Shaikh Mohammed (KSM), Ramzi bin al-Shibh, who helped coordinate the attacks, Ali Abdul Aziz Ali and Mustafa Ahmed al-Hawsawi, who assisted some of the 19 hijackers in Asia, and Khallad bin Attash, who attended a meeting with two of the hijackers in January 2000 (see January 5-8, 2000). The five previously indicated they intend to plead guilty (see December 8, 2008). US Attorney General Eric Holder says: “For over 200 years, our nation has relied on a faithful adherence to the rule of law to bring criminals to justice and provide accountability to victims. Once again we will ask our legal system to rise to that challenge, and I am confident it will answer the call with fairness and justice.” Secretary of Defense Robert Gates was also involved in the decision on where to try the men. (US Department of Justice 11/13/2009) However, five detainees are to remain in the military commissions system. They are Ibrahim al-Qosi, Omar Khadr, Ahmed al-Darbi, Noor Uthman Mohammed, and Abd al-Rahim al-Nashiri. (McClatchy 11/14/2009) These five detainees are fighting the charges against them:

Khadr’s lawyers claim he was coerced into admitting the murder of a US solider in Afghanistan; (Edwards 11/14/2009)

Noor Uthman Mohammed denies most of the charges against him (see (Late 2004));