This page can be viewed at http://www.historycommons.org/entity.jsp?entity=iman_bin_laden

Iman bin Laden was a participant or observer in the following events:

Soliman Biheiri. [Source: US Immigrations and Customs]BMI Inc., a real estate investment firm based in Secaucus, New Jersey, is formed in 1986. Former counterterrorism “tsar” Richard Clarke will state in 2003, “While BMI [has] held itself out publicly as a financial services provider for Muslims in the United States, its investor list suggests the possibility this facade was just a cover to conceal terrorist support. BMI’s investor list reads like a who’s who of designated terrorists and Islamic extremists.” Investors in BMI include: (US Congress 10/22/2003)

Soliman Biheiri. He is the head of BMI for the duration of the company’s existence. US prosecutors will later call him the US banker for the Muslim Brotherhood, a banned Egyptian militant group. Biheiri’s computer will eventually be searched and found to have contact information for Ghaleb Himmat and Youssef Nada, leaders of the Al Taqwa Bank, which is founded two years after BMI (see 1988). After 9/11, the US and UN will designate both Himmat and Nada and the Al Taqwa Bank as terrorist financiers, and the bank will be shut down (see November 7, 2001). US prosecutors say there are other ties between BMI and Al Taqwa, including financial transactions. Biheiri also has close ties with Yousuf Abdullah Al-Qaradawi. Qaradawi is said to be a high-ranking member of the Muslim Brotherhood, a shareholder in Al Taqwa, and has made statements supporting suicide bombings against Israel. In 2003, US investigators will accuse Biheiri of ties to terrorist financing. He will be convicted of immigration violations and lying to a federal agent (see June 15, 2003). (Simpson 9/15/2003; Perelman 10/17/2003) Biheiri will be convicted of immigration fraud in 2003 and then convicted of lying to federal investigators in 2004 (see June 15, 2003).

Nur and Iman bin Laden, two female relatives of Osama bin Laden. Abdullah Awad bin Laden will invest some of their money in a BMI real estate project. While their bin Laden family ties are intriguing, neither have been accused of any knowing connections to terrorist financing. (Sheridan 4/19/2004)

Yassin al-Qadi, a Saudi multimillionaire. His lawyers will later claim he has no terrorism ties and had only a passing involvement with BMI and liquidated his investment in it in 1996. However, another company operating from the same office as BMI is called Kadi International Inc. and lists its president as al-Qadi. Al-Qadi is also a major investor in the suspect computer company Ptech (see 1994; 1999-After October 12, 2001). Al-Qadi and BMI head Biheiri have financial dealings with Yaqub Mirza, a Pakistani who manages a group of Islamic charities in Virginia known as the SAAR network (see July 29, 1983). These charities will be raided in March 2002 on suspicions of terrorism ties (see March 20, 2002). Shortly after 9/11, the US will officially declare al-Qadi a terrorist financier (see October 12, 2001). (Simpson 9/15/2003)

Saleh Kamel. BMI allegedly receives a $500,000 investment from the Dallah Al-Baraka banking conglomerate, which is headed by Kamel. For many years before 9/11, Omar al-Bayoumi, an associate of 9/11 hijackers Khalid Almihdhar and Nawaf Alhazmi, will receive a salary from Dallah, despite apparently doing no work. Some will accuse al-Bayoumi of involvement in funding the 9/11 plot, but that remains to been proven (see August 1994-July 2001). Kamel reportedly founded a Sudanese Islamic bank which housed accounts for senior al-Qaeda operatives. He is a multi-billionaire heavily involved in promoting Islam, and his name appears on the Golden Chain, a list of early al-Qaeda supporters (see 1988-1989). He denies supporting terrorism. (US Congress 10/22/2003; Simpson 6/21/2004)

Tarek Swaidan. He is a Kuwaiti, an associate of al-Qadi, and a leading member of the Kuwaiti branch of the Muslim Brotherhood. It is unknown if he has made any denials about his alleged associations. (Simpson 9/15/2003)

Abdurahman Alamoudi. For many years he runs the American Muslim Council, a lobby group founded by a top Muslim Brotherhood figure. US prosecutors say he also is in the Brotherhood, and has alleged ties to Hamas. In 2004, the US will sentence him to 23 years in prison for illegal dealings with Libya (see October 15, 2004). (Simpson 6/21/2004; Markon 10/16/2004)

The International Islamic Relief Organization (IIRO) and the Muslim World League, closely connected Saudi charities suspected of financing terrorism. They give BMI $3.7 million out of a $10 million endowment from unknown Saudi donors. The Financial Times will later note, “While it is not clear whether that money came from the Saudi government, [a 2003] affidavit quotes a CIA report that says the Muslim World League ‘is largely financed by the government of Saudi Arabia.’” Both organizations consistently deny any support of terrorism financing, but in early 2006 it will be reported that US officials continue to suspect them of such support (see January 15, 2006). (Alden and Brun-Rovet 8/21/2003) In 1992, a branch of the IIRO gives $2.1 million to BMI Inc. to invest in real estate. The money disappears from BMI’s books. In October 1999, BMI goes defunct after it is unable to repay this money to the IIRO branch. The IIRO branch gives BMI the rest of the $3.7 million between 1992 and 1998. BMI will use the money to buy real estate (see 1992). Eventually, some of this money will be given to Hamas operatives in the West Bank and spent on violent actions against Israel. This will eventually lead to legal action in the US and a seizure of some of the money. (Simpson 11/26/2002; Farah 8/20/2003; Seper 3/26/2004; Sheridan 4/19/2004) By 1992, BMI has projected revenues in excess of $25 million, based largely on their real estate investments in the US. (US Congress 10/22/2003) In early 1999, months before BMI goes defunct, the FBI hears evidence potentially tying BMI to the 1998 US embassy bombings (see 10:35-10:39 a.m., August 7, 1998), but an investigation into this will not be pursued (see Early 1999). It should be noted that BMI had many investors, and presumably most BMI investors would have had no suspicions that their money might be used to fund terrorism or other types of violence.

1997-December 1999: FBI and Swiss Fail to Act Against Suspicious Bank and Its Shareholders

Yousuf Abdullah Al-Qaradawi. [Source: Zuma Press/ Newscom]In December 1999, the FBI apparently discovers a list of shareholders in the Al Taqwa Bank that reflects holdings in the bank at that time. The list is later confirmed as authentic by both US and Al Taqwa officials. It contains over 700 names. Youssef Nada, the president of Al Taqwa, will claim that the FBI knew the essential contents of the list in 1997, the same year they learned of other ties between the bank and officially designated terrorist groups (see 1997-September 11, 2001). (Komisar 3/15/2002) Names on the list include:

Yousuf Abdullah Al-Qaradawi, the grand mufti of the United Arab Emirates, and five members of his family. Qaradawi is said to be a high-ranking member of the Muslim Brotherhood and has made statements supporting suicide bombings against Israel (see 1986-October 1999).

Huta and Iman bin Laden, sisters of Osama bin Laden. Salon notes that the presence of their names on the list “undermin[es] the bin Laden family’s claim that it separated itself from [Osama’s] terrorist pursuits after he was expelled from Saudi Arabia in 1994.”

Other bin Laden family members. For instance, Ghalib Mohammad Binladin, a brother of Osama, sues Al Taqwa in 1999 for failing to pay him a claim (the suit is thrown out of court.) (Hosenball 11/7/2001)

Unnamed members of Hamas, which the US declared a terrorist group in 1995.

Hassan el-Banna, a leader of the Muslim Brotherhood. (A man with this name founded the Muslim Brotherhood but died in 1949; this may be one of his descendants.) Other names on the list are said to be connected to organizations linked to al-Qaeda. Swiss officials later will admit that they were aware of reports connecting Al Taqwa to terrorist groups, but will claim they never had enough evidence to obtain a search warrant. However, no effective action is taken against the bank or anyone on the list. (Komisar 3/15/2002) The Al Taqwa Bank is said to have amassed $229 million in capital by 1997. In 1995, one of the bank’s directors said that oil-rich Saudi families “are very active” in using the bank. The bank will be shut down after 9/11, when US officials will charge it with funding al-Qaeda and other US-designated terrorist groups (see November 7, 2001). (Wells 11/8/2001) 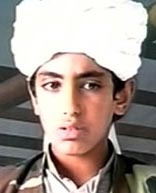 Hamza Bin Laden in 2001. [Source: Getty Images]Several members of Osama bin Laden’s family cross into Iran on foot shortly before the 9/11 attacks. The exact number of family members that cross at this time is unknown, although 19 of bin Laden’s relatives will soon be present in Iran: one wife, seven children, and 11 grandchildren. The children are Saad, who is 20; Ossman, 17; Mohammed, 15; Fatma, 14; Hamza, 12; Iman, 9; and Bakr, 7. They are placed under virtual house arrest in a high-security compound near Tehran, “for their own safety.” The Iranian authorities will publicly deny their presence in the country, and will attempt to cut off their communications with the outside world. Al-Qaeda operatives will also be held in Iran after 9/11 (see Spring 2002). The whereabouts of the detained family members will remain unknown until November 2009, when they will contact another son of bin Laden, Omar Ossama, who is currently living in Qatar with his wife. The family will tell Omar they live as normal a life as possible, cooking meals, watching television, and reading. They will be allowed out only rarely for shopping trips. As a number of families are being held in the compound, some of the older siblings will be able to marry and have their own children. “The Iranian government did not know what to do with this large group of people that nobody else wanted, so they just kept them safe,” Omar Ossama will later say. (Brown 12/23/2009)

Osama bin Laden’s daughter Iman escapes from house arrest in Iran. Iman had been held there since mid-2001 along with other family members (see Shortly Before September 11, 2001) and some al-Qaeda operatives (Spring 2002). After escaping during a rare shopping trip, the 17-year-old Iman reaches the Saudi Arabian embassy, where she remains for at least a month while authorities negotiate her departure from Iran. The escape comes just a week after detained family members managed to communicate with her brother Omar Ossama bin Laden, a resident of Qatar who had previously thought these relatives of his dead. Their detention will remain secret for another month, until Omar Ossama publicizes it in the international media. He will appeal for his relatives to be released, so they can join him in Qatar, or other relatives in Syria. (Brown 12/23/2009)