This page can be viewed at http://www.historycommons.org/entity.jsp?entity=iraqi_ministry_of_labor_and_social_affairs_1

Iraqi Ministry of Labor and Social Affairs was a participant or observer in the following events: 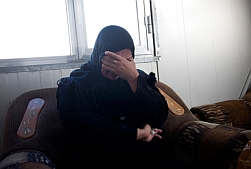 An Iraqi war widow. [Source: Johan Spanner / New York Times]Iraqi women, particularly war widows, have an extremely difficult time surviving in their country, according to a profile by the New York Times. Of Iraqi women between 15 and 80 years of age, 740,000, or around one in 11, are estimated to be widows; only about 120,000 of those widows receive any governmental aid.
Depressed Living Conditions - Many of the widows profiled by the Times live, either alone or with the remnants of their families, in a trailer park for war widows in a poor section of Baghgad. Many other widows are not so fortunate; the trailer park, which houses 750 people, is among the very few aid programs available for the widows. Many of those widows and their children live in public parks or inside gas station restrooms. The sight of war widows begging on the street—or available as potential recruits for insurgents—is an everyday occurrence.
Potential Insurgency Recruits - Times reporter Timothy Williams writes: “As the number of widows has swelled during six years of war, their presence on city streets begging for food or as potential recruits by insurgents has become a vexing symbol of the breakdown of Iraqi self-sufficiency. Women who lost their husbands had once been looked after by an extended support system of family, neighbors, and mosques. But as the war has ground on, government and social service organizations say the women’s needs have come to exceed available help, posing a threat to the stability of the country’s tenuous social structures.”
'Too Many' Widows to Help - Leila Kadim, a managing director in the Ministry of Labor and Social Affairs, acknowledges that the situation will not change soon. “We can’t help everybody,” she says. “There are too many.”
Alternatives - Some engage in “temporary marriages,” Shi’ite-sanctioned unions lasting anywhere from an hour to a year and usually based on sex, to become eligible for government, religious, or tribal leaders. Others have become prostitutes. Others have joined the insurgency in return for steady pay. The Iraqi military says dozens of women have become suicide bombers, and that number is expected to increase.
Minimal Government Assistance - The government’s current stipend for widows is an ungenerous $50/month and an additional $12/month for each child; efforts to increase that stipend have not made progress. And only about one in six widows receive that small amount of money. Widows and their advocates say that to receive benefits they must either have political connections or agree to temporary marriages with the powerful men who control the distribution of government funds. Samira al-Mosawi, chair of the women’s affairs committee in Parliament, says: “It is blackmail. We have no law to treat this point. Widows don’t need temporary support, but a permanent solution.”
Paying Men to Marry Widows - One solution has been proposed by Mazin al-Shihan, director of the Baghdad Displacement Committee. Al-Shihan has introduced a proposal to pay men to marry widows. When asked why money shouldn’t go directly to the widows, al-Shihan laughs. “If we give the money to the widows, they will spend it unwisely because they are uneducated and they don’t know about budgeting,” he says. “But if we find her a husband, there will be a person in charge of her and her children for the rest of their lives. This is according to our tradition and our laws.” (Williams 2/22/2009)