This page can be viewed at http://www.historycommons.org/entity.jsp?entity=j__katharine_burton_1

J. Katharine Burton was a participant or observer in the following events: 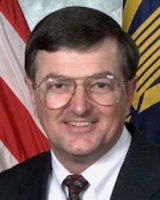 )
Briefing Attended by Public and Private Sectors Representatives - The briefing is held at what journalist and author Dan Verton will call “a secure facility outside of Washington, DC.” Presumably this is the NCS’s National Coordinating Center in Arlington, Virginia. Attendees include Brenton Greene, the director of the NCS since April 2001, and representatives from seven other federal agencies and over 40 technology and communications companies that operate many of the US’s most critical communications networks. The representatives from the private sector, according to Verton, are all “senior executives from their respective companies, and all had government security clearances that granted them access to the most sensitive intelligence data pertaining to threats to the infrastructures that formed not only the lifelines of their businesses but the lifelines of the nation as well.”
CIA Outlines Threat to Telecommunications Infrastructure - Although Greene is a 25-year veteran of the Navy’s submarine force and is “used to classified briefings and operating in the shadows,” the current briefing, according to Verton, promises “to be different from any other he had taken part in.” The CIA representatives begin it at 8:00 a.m. by outlining the growing international terrorist threat to the US telecommunications infrastructure.
Terrorists Aware of Benefits of Targeting Telecommunications - Verton will describe that the briefing participants then agree that there is “a growing body of evidence relating to the increased sophistication in information warfare (IW) capabilities of foreign nations.” Additionally, a cyber-attack against computer systems in the US “would likely involve a major disruption of key telecommunications infrastructures serving other sectors of the economy, including banking and finance, electric power, and air traffic control.” Greene will later comment: “Everything runs on telecom. If it’s a major cyber-event, it’s going to have a physical tail. If it’s a major physical event, it’s going to have a cyber-tail.” The CIA representatives say that some terrorist organizations are also becoming aware of the potential offered by targeting the telecommunications infrastructure.
Briefing Continues despite News of First Crash - Shortly after 8:46 a.m., when the first plane hits the WTC, Navy Captain J. Katharine Burton enters the briefing room and whispers to Greene the news of what has happened. With no further information available and no evidence that the crash was anything more than an accident, Greene calmly passes on the news to the other people in the room, and then orders the briefing to continue. The CIA representatives therefore go on until news arrives of the second plane hitting the WTC at 9:03 a.m., and televisions are turned on to CNN, which is showing live coverage from New York. Greene will later recall: “It was clear then that there was some threat. When the second plane hit, I said: ‘I’m leaving. I need to go look at the implications of this.’” (Verton 2003, pp. 135-139, 141)
9/11 Attacks Are 'the Most Significant Challenge' to the NCS - The NCS will play a key role in the government’s response to the 9/11 attacks, which result in severe damage and impairment to the telecommunications infrastructure serving the area around the WTC. (National Communications System 2004, pp. 56

) Greene will later recall that the destruction caused by the attacks becomes “the most significant challenge that the National Communications System had ever seen.” (Verton 2003, pp. 151) The NCS’s National Coordinating Center is activated, and supports response and recovery efforts (see (8:48 a.m.) September 11, 2001). After leaving the briefing, Greene will head to his “Continuity of Government” site, from where the status of the communications network is constantly monitored, and priorities and repairs are coordinated. (9/11 Commission 3/16/2004