This page can be viewed at http://www.historycommons.org/entity.jsp?entity=james_eagan_holmes_1

James Eagan Holmes was a participant or observer in the following events:

July 20, 2012: Congressman Blames Movie Shooting on ‘Ongoing Attacks on Judeo-Christian Beliefs,’ Says Other Moviegoers Could Have Shot Back

In the hours after a horrific shooting at a movie theater in Aurora, Colorado, that took the lives of 12 people, Representative Louis Gohmert (R-TX) blames the shooting on what he calls the “ongoing attacks on Judeo-Christian beliefs,” and asks why no one in the theater was armed and able to shoot the gunman. The alleged gunman, college student James Eagan Holmes, was taken into custody at the scene, a midnight showing of the just-released movie The Dark Knight Rises. He was wearing a bulletproof vest, ballistic helmet, a gas mask, and what the press calls “military/SWAT-style clothing.” He carried an assault rifle, two handguns, a knife, and a gas canister. Before he began shooting, he released a gas or smoke canister into the theater. Gohmert speaks out on the Heritage Foundation’s Istook Live! show, hosted by former Congressman Ernest Istook. Istook asks Gohmert why he believes such senseless violence happens, and Gohmert responds by citing what he calls weakening Christian values in Americans. “You know what really gets me, as a Christian, is to see the ongoing attacks on Judeo-Christian beliefs, and then some senseless crazy act of a derelict takes place,” he says. “Some of us happen to believe that when our founders talked about guarding our virtue and freedom, that that was important. Whether it’s John Adams saying our Constitution was made only for moral and religious people… Ben Franklin, only a virtuous people are capable of freedom, as nations become corrupt and vicious they have more need of masters. We have been at war with the very pillars, the very foundation of this country.” Istook notes that no one has determined the motivation of the shooter just yet. Gohmert says that may be true, but then calls the shootings “a terrorist act” that could have been avoided if the country placed a higher value on God. “People say… where was God in all of this?” Gohmert says. “We’ve threatened high school graduation participations, if they use God’s name, they’re going to be jailed… I mean that kind of stuff. Where was God? What have we done with God? We don’t want him around. I kind of like his protective hand being present.” Gohmert adds that the shooter could have been stopped had someone else been in the theater with a gun and shot back at him. The theater was crowded with people, including many teenagers and children; the youngest victim identified by the media was a three-month-old child. “It does make me wonder, with all those people in the theater, was there nobody that was carrying a gun that could have stopped this guy more quickly?” Gohmert asks. Istook notes that Colorado has concealed-carry laws in place that allow moviegoers to bring their guns into the theater, though apparently the theater itself does not allow weapons inside the premises. (Bendary 7/20/2012; CBS News 7/20/2012; KCNC-TV 7/20/2012; Louis Gohmert 7/20/2012) Jeff Fecke of Care2 writes: “[T]hese remarks will likely be ill-received; in the wake of a tragedy, few people want to see finger-pointing. Especially by someone claiming that God would allow 12 people to die out of pique.” (Fecke 7/20/2012) 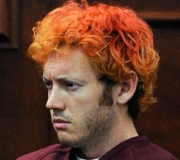