This page can be viewed at http://www.historycommons.org/entity.jsp?entity=james_lester

James Lester was a participant or observer in the following events: 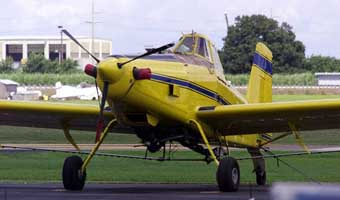 A crop duster at South Florida Crop Care. [Source: Colin Braley / Reuters]In March and August 2001, 9/11 hijacker Mohamed Atta visits a small airport in South Florida and asks detailed questions about how to start and fly a crop-duster plane. People there easily recall him because he was so persistent. After explaining his abilities, Atta is told he is not skilled enough to fly a crop-duster. (Rosenberg 9/24/2001) Employees at South Florida Crop Care in Belle Glade, Florida, later tell the FBI that Atta was among the men who in groups of two or three visited the crop dusting firm nearly every weekend for six or eight weeks before the attacks. Employee James Lester says, “I recognized him because he stayed on my feet all the time. I just about had to push him away from me.” (Associated Press 9/15/2001) Yet, according to US investigators, Atta and the other hijackers gave up on the crop-duster idea back around May 2000.