This page can be viewed at http://www.historycommons.org/entity.jsp?entity=james_sensenbrenner_1

James Sensenbrenner was a participant or observer in the following events:

Six months after 9/11, a Venice, Florida flight school attended by Mohamed Atta and Marwan Alshehhi belatedly receives visa approval forms for the alleged hijackers. The two had been required to apply for student visas before entering a professional flight training program. Their applications were sent from the school, Huffman Aviation, to the Immigration and Naturalization Service in August or September 2000 (see (August 29-September 15, 2000)). The forms show that the INS approved the visas in July and August 2001, clearing both men to stay in the US until October 1, 2001. Spokesman Russ Bergeron says the INS notified the two shortly afterwards. Despite Atta and Alshehhi’s alleged involvement in the 9/11 attacks, an INS clerk issued their visas in October 2001. Rep. James Sensenbrenner (R-WI) comments, “This shows once again the complete incompetence of the immigration service to enforce our laws and protect our borders.” (McIntyre 3/13/2002; Brassfield and Murphy 3/13/2002)

The Justice Department provides limited information to the House Judiciary Committee about actions performed under the new Patriot Act (see October 26, 2001). Representative James Sensenbrenner (R-WI) had demanded answers to 50 questions regarding the Patriot Act from Attorney General John Ashcroft, or else he would “start blowing a fuse.” Among other things, Sensenbrenner wanted to know how many times the Justice Department had implemented wiretaps under the act, and threatened Congressional subpoenas and opposition to the act when it comes up for renewal. Sensenbrenner and the Judiciary Committee receive far less than originally requested, with the Justice Department asserting that much of the information is classified and cannot be revealed. Sensenbrenner declares himself satisfied. (Savage 2007, pp. 114-115)

Representative John Conyers (D-CA), the ranking member of the House Judiciary Committee, writes a letter to committee chairman James Sensenbrenner (R-WI), asking that the committee open an investigation into the Plame Wilson identity leak. Sensenbrenner will not respond to Conyers’ letter. (Waxman 12/2005) 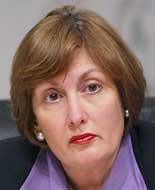 9/11 Commissioner Jamie Gorelick is attacked for her role in extending the ‘wall’. [Source: Associated Press / Charles Dharapak]Attorney General John Ashcroft’s testimony before the 9/11 Commission (see April 13, 2004) sparks a wave of attacks against 9/11 Commissioner Jamie Gorelick, who was Deputy Attorney General during the Clinton administration. In 1995 Gorelick played a leading role in extending the “wall,” a set of procedures that regulated the passage of information from FBI intelligence agents to FBI criminal agents and prosecutors (see March 4, 1995 and July 19, 1995). Ashcroft calls the wall “the single greatest structural cause for September 11.” The attacks include:

On April 14 James Sensenbrenner, chairman of the House Judiciary Committee, calls on Gorelick to resign because of her “crippling conflict of interest.” He says “the public cannot help but ask legitimate questions about her motives” and argues that the commission will be “fatally damaged” if she continues. Other Republican congresspersons repeat this call;

On April 16 House Majority Leader Tom Delay writes to Commission Chairman Tom Kean saying Gorelick has a conflict of interest and accusing the commission of “partisan mudslinging, circus-atmosphere pyrotechnics, and gotcha-style questioning,” as well as undermining the war effort and endangering the troops;

Criticism of Gorelick also appears in several media publications, including the New York Times, New York Post, National Review, Washington Times, and Wall Street Journal. For example, an op-ed piece published in the New York Times by former terrorism commissioners Juliette Kayyem and Wayne Downing says the commissioners are talking too much and should “shut up.” (McCarthy 4/13/2004; McCarthy 4/19/2004; Kean and Hamilton 2006, pp. 200-203)

On April 22 Senator Christopher Boyd and ten other Republican senators write to the commission calling on Gorelick to testify in public;

On April 26 Congressman Lamar Smith and 74 other Republicans write to Gorelick demanding answers to five questions about her time as deputy attorney general;

On April 28 the Justice Department declassifies other memos signed by Gorelick;

In addition to hate mail, Gorelick receives a bomb threat, requiring a bomb disposal squad to search her home.
Commission Chairmen Tom Kean and Lee Hamilton will call this an “onslaught” and say her critics used the wall “as a tool to bludgeon Jamie Gorelick, implicate the Clinton administration, and undermine the credibility of the commission before we had even issued our report.” Gorelick offers to resign, but the other commissioners support her and she writes a piece for the Washington Post defending herself. (Gorelick 4/18/2004; Kean and Hamilton 2006, pp. 200-205) When the commission meets President Bush and Vice President Cheney at the end of the month (see April 29, 2004), Bush tells Kean and Hamilton he does not approve of memos being declassified and posted on the Justice Department’s website. At this point, the commissioners realize “the controversy over Jamie Gorelick’s service on the commission was largely behind us.” That afternoon, the White House publicly expresses the president’s disappointment over the memos and the effort to discredit Gorelick loses momentum. (Kean and Hamilton 2006, pp. 208, 210) 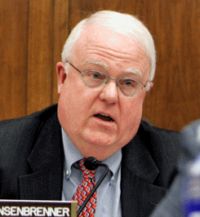 Congressional Republicans jump-start the process to renew the 1965 Voting Rights Act (VRA—see August 6, 1965 and June 29, 1989) in what media and political observers believe is an effort to outflank Democrats, who are traditionally the most staunch supporters of the bill. Key portions of the bill are set to expire in 2007, including Section 5, which requires that states, districts, and other locales with a history of racial discrimination in their electoral processes get Justice Department approval before making any changes to voting procedures. Section 5 is intended to ensure that minorities are not disenfranchised due to their race. Observers believe Republicans want to avoid a showdown over the bill in light of the upcoming midterm elections in 2006. In 1982, the Reagan administration fought Congressional Democrats over an expansion of the law, and Republicans want to make sure that scenario does not play itself out again as the midterm elections approach. Republicans also want to reach out to African-American voters, traditionally a strong Democratic voting bloc. Representative John Lewis (D-GA), a veteran of the civil rights struggle, says, “I’m not surprised at all” that Republicans want to renew the VRA and reach out to black voters. “The Republicans are reaching out to the African-American voters.… They want to make a dent with the black electorate, take some of those voters away from the Democratic side.” Lewis intends to insert language into the renewal bill that would invalidate a recent Georgia law requiring photo identification for prospective voters, a requirement he and many others say would discriminate against the poor and the elderly. Representative James Sensenbrenner (R-WI) broke with recent Republican tradition by calling on Congress to renew Section 5 and other portions of the VRA at the NAACP’s annual convention in July. “I am here to tell you publicly what I have told others privately, including the head of the Congressional Black Caucus, Rep. Mel Watt,” Sensenbrenner told the assemblage. “During this Congress we are going to extend the Voting Rights Act. We cannot let discriminatory practices of the past resurface to threaten future gains. The Voting Rights Act must continue to exist—and exist in its current form.” Sensenbrenner said at the convention that House Speaker Dennis Hastert (R-IL) considers renewal of the VRA “high on his list of issues the House will address this Congress.” A representative for Senate Majority Leader Bill Frist (R-TN) says Frist is “fired up” over renewal of Section 5. Only a few months ago, Bush appeals court nominee William Pryor, a Republican from Alabama, called Section 5 “an affront to federalism and an expensive burden that has far outlived its usefulness,” a controversial characterization that Senator Saxby Chambliss (R-GA) and other Republicans defended. In May, Attorney General Alberto Gonzales suggested that the Bush administration is not fully behind reauthorization of Section 5. Political observers say that Democrats intend to use any further Republican opposition to the VRA to claim that Republicans are insensitive to black voters, even as senior Republican strategists like Republican National Committee Chairman Ken Mehlman say they want the party to appeal to that demographic. Mehlman told the NAACP convention in July that Republican leaders had tried over the past 40 years “to benefit politically from racial polarization.” He then said, “We were wrong” to do so. (Curry 10/4/2005)