This page can be viewed at http://www.historycommons.org/entity.jsp?entity=jamie_dupree_1

Jamie DuPree was a participant or observer in the following events:

August 21, 2008: Conservative Radio Host Wants to Ask Obama ‘How Many [Muslim] Prayer Rugs He Has’ 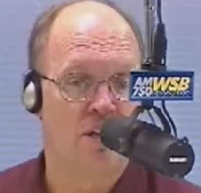 Neal Boortz. [Source: Premiere Motivational Speakers Bureau]As reported by progressive media watchdog site Media Matters, conservative radio host Neal Boortz, falsely claiming Democratic presidential candidate Barack Obama is a Muslim, suggests asking Obama “how many prayer rugs he has.” Boortz is attacking Obama in response to a recent gaffe by Republican contender John McCain, who seemingly could not remember how many homes he owns. After calling McCain, who is 72, “senile… he keeps going to the wrong home, too, at night,” he then adds, “Let’s ask Obama how many prayer rugs he has.” When Cox Radio correspondent Jamie DuPree says: “See? And, you know, somebody would say that’s not fair,” Boortz responds, “Well, I’m not trying to be fair.” (Media Matters 8/25/2008) Boortz is repeating the debunked assertion that Obama is a Muslim (see January 22-24, 2008).