This page can be viewed at http://www.historycommons.org/entity.jsp?entity=jeffrey_goldberg_1

Jeffrey Goldberg was a participant or observer in the following events: 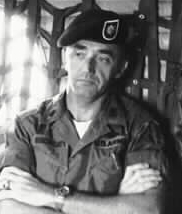 Lt. Col. William Buckley. [Source: Arlington Cemetery (.net)]William Buckley, the CIA station chief in Beirut, is kidnapped by militants who claim to be part of a mysterious organization they call Islamic Jihad. Buckley will die in June 1985, after 15 months of captivity, neglect, and torture. The CIA will not acknowledge his death until 1987. His body will not be returned to the US until December 1991. Buckley’s captivity, and that of at least five other American hostages, will be cited as one of the precipitating factors in the Iran-Contra arms deals. (PBS 2000; Arlington Cemetery (.net) 4/23/2006) (Note: Some sources cite the date of his capture as March 16, not March 3.) (New York Times 11/19/1987) It remains unclear exactly who Buckley’s captors are. This “Islamic Jihad” organization is not the same group as is later led by Sunni militant Ayman al-Zawahiri, nor is it the Palestinian organization of the same name. In the 2001 book Sacred Rage, author Robin B. Wright notes that a group spokesman claims, “We are neither Iranians, Syrians nor Palestinians, but Muslims who follow the precepts of the Koran.” Wright calls the organization “a mysterious group about which nothing was known” except for its “pro-Iranian” ideology, probably “more of an information network for a variety of cells or movements rather than a cohesive or structured independent group of extremists.” (Wright 2001, pp. 73, 85) New Yorker reporter Jeffrey Goldberg later writes that he believes the organization is either a precursor to the Lebanese militant organization Hezbollah or a more violent adjunct to that organization. (Goldberg 10/14/2002)

Former UN weapons inspector Scott Ritter casts doubt on Salman Pak’s characterization as a terrorist training facility (see April 6, 2003), in an August 2002 interview later included in his book War on Iraq. Ritter says in part, “Iraqi defectors have been talking lately about the training camp at Salman Pak, south of Baghdad. They say there’s a Boeing aircraft there. That’s not true. There’s an Antonov aircraft of Russian manufacture. They say there are railroad mock-ups, bus mock-ups, buildings, and so on. These are all things you’d find in a hostage rescue training camp, which is what this camp was when it was built in the mid-1980s with British intelligence supervision. In fact, British SAS special operations forces were sent to help train the Iraqis in hostage rescue techniques. Any nation with a national airline and that is under attack from terrorists—and Iraq was, from Iran and Syria at the time would need this capability. Iraq operated Salman Pak as a hostage rescue training facility up until 1992. In 1992, because Iraq no longer had a functioning airline, and because their railroad system was inoperative, Iraq turned the facility over to the Iraqi Intelligence service, particularly the Department of External Threats. These are documented facts coming out of multiple sources from a variety of different countries. The Department of External Threats was created to deal with Kurdistan, in particular, the infusion of Islamic fundamentalist elements from Iran into Kurdistan. So, rather than being a camp dedicated to train Islamic fundamentalist terrorists, it was a camp dedicated to train Iraq to deal with Islamic fundamentalist terrorists. And they did so. Their number one target was the Islamic Kurdish party, which later grew into [Ansar al-Islam]. Now, Jeff Goldberg claimed in the New Yorker that [Ansar al-Islam] is funded by the Iraqi Intelligence service. But that’s exactly the opposite of reality: the Iraqis have been fighting Ansar for years now. Ansar comes out of Iran and is supported by Iranians. Iraq, as part of their ongoing war against Islamic fundamentalism, created a unit specifically designed to destroy these people. It would be ludicrous for Iraq to support al-Qaeda, either conventionally, as many have claimed, or even worse, to give it weapons of mass destruction…” (Ritter and Pitt 9/25/2002)

September 26, 2002 and After: African-American Republican Reportedly Pelted with Oreo Cookies at Debate; Story Changes over Time 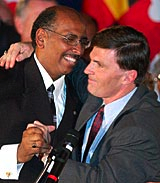