This page can be viewed at http://www.historycommons.org/entity.jsp?entity=jennifer_crider_1

Jennifer Crider was a participant or observer in the following events: 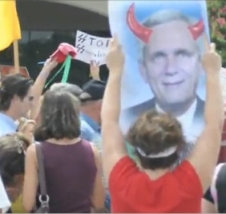 Anti-reform protesters carry signs depicting Doggett with ‘devil horns’ and a sign featuring Nazi SS lettering. [Source: Raw Story]Congressman Lloyd Doggett (D-TX) receives a hostile reception in a town hall meeting in an Austin grocery store. The meeting is to discuss the controversial Democratic health care reform proposal. The crowd is much larger than some had anticipated, and apparently packed with anti-health care reform protesters; anti-reform and anti-Obama signs are prominently displayed, including signs that read, “No Socialized Health Care.” Protesters also wave signs with Doggett depicted with devil horns, of a marble tombstone with Doggett’s name on it, and with slogans alleging Democrats are Nazis. When Doggett tells the crowd that he will support the reform plan even if his constituents oppose it, many in the crowd begin chanting “Just say no!” and, according to news reports, “overwhelm… the congressman as he move[s] through the crowd and into the parking lot.” One resident says of the meeting: “The folks there thought their voices weren’t being heard. They were angry, but they were respectful. There wasn’t any violence.” Another says, laughing: “He jumped in [his car] and fled. It was like he was tarred and feathered and ridden out of town on a rail. It was a beautiful thing.” Doggett later notes that because of the disruption, he is unable to engage in discussion with constituents who have other issues, including a father who wants his help in getting his son into a military academy. (Austin American-Statesman 8/3/2009; Herszenhorn and Stolberg 8/3/2009; Ambinder 8/4/2009)
Congressman: Protesters a 'Mob' - Doggett will later characterize the anti-reform protesters as a “mob.” In a statement, he says: “This mob, sent by the local Republican and Libertarian parties, did not come just to be heard, but to deny others the right to be heard. And this appears to be part of a coordinated, nationwide effort. What could be more appropriate for the ‘party of no’ than having its stalwarts drowning out the voices of their neighbors by screaming ‘just say no!‘… Their fanatical insistence on repealing Social Security and Medicare is not just about halting health care reform but rolling back 75 years of progress. I am more committed than ever to win approval of legislation to offer more individual choice to access affordable health care. An effective public plan is essential to achieve that goal.” (Thrush 8/3/2009; Hechtkopf 8/3/2009)
Coordinated by Local Republicans, Washington Lobbyist Firm, 'Tea Party' Group - The protest is coordinated by Heather Liggett, a local Republican Party operative, and by officials with the lobbying firm Americans for Prosperity (AFP), which has organized numerous anti-tax “tea party” demonstrations (see April 15, 2009 and May 29, 2009). Liggett confirms she is part of a national network of conservative organizers putting together anti-reform protests. Doggett says: “This is not a grassroots effort. This is a very coordinated effort where the local Republican Party, the local conservative meet-up groups sent people to my event.” Of the event itself, he says: “In Texas, not only with the weather but with the politics, it is pretty hardball around here. I have a pretty thick skin about all of this. But this really goes over the line.” And Jennifer Crider, a spokeswoman for the Democratic Congressional Campaign Committee (DCCC), adds: “Conservative activists don’t want to have a conversation. They want to disrupt.” (Herszenhorn and Stolberg 8/3/2009) Democratic National Committee (DNC) spokesman Brad Woodhouse says, “The right-wing extremists’ use of things like devil horns on pictures of our elected officials, hanging members of Congress in effigy, breathlessly questioning the president’s citizenship, and the use of Nazi SS symbols and the like just shows how outside of the mainstream the Republican Party and their allies are.” Another group with connections to the “tea party” movement, “Operation Embarrass Your Congressman,” helped organize the protest. It says on its Web site: “These arrogant, ignorant, and insolent [Congress members] have embarrassed America, trampled the Constitution, and ignored their constituents for far too long. Attend their townhall meetings during recess and press them with intelligent questions (unlike the mainstream media), asked in an intelligent manner to see if they are really in touch and on board with ‘the will of the people.’” (Hechtkopf 8/3/2009) After the meeting, FreedomWorks, a conservative lobbying organization that actively promotes disruptive behavior at Congressional town halls (see April 14, 2009), posts video from the meeting, and exhorts its members, “If you know of a town hall meeting your Congressman is having, be sure to show up, bring some friends, and them know what you think.” (FreedomWorks 8/3/2009)

The logo used for the Obama administration’s health care proposal on the White House Web site. The logo combines the Obama presidential campaign’s ‘sunrise’ emblem with a stylized version of the medical caduceus. [Source: White House]After denouncing House Speaker Nancy Pelosi for claiming that anti-health care protesters had used Nazi symbols and rhetoric in their protests (see August 6, 2009), conservative radio talk show host Rush Limbaugh also makes a comparison between the Obama administration and Nazis. “Adolf Hitler, like Barack Obama, also ruled by dictate,” he says. Like Obama, Limbaugh asserts, Hitler “was called the Messiah” and did not need the advice of a cabinet or other advisers to make decisions. “The people spoke through” Hitler, as Limbaugh says Obama believes is the case for himself. Hitler’s decisions “sound like the things liberals are doing all over this country.” To Pelosi, he says, “You look much more like [a swastika] than any of us [conservatives] ever will.” (Media Matters 8/6/2009; Rhee 8/6/2009) Limbaugh also says that the Obama administration’s health care logo looks very much like the “Nazi swastika logo.” He adds: “It reminded me of Germany. Something about it reminded me of Germany, 1942. The shape of the logo, the people.… The Obama health care logo is damn close to a Nazi swastika logo.… Ms. Pelosi has some major apologizing to do.” He says perhaps Pelosi’s supposed “repeated botox injections” have caused her to have “blurry vision” that may have prevented her from seeing the similarities he noticed. (Media Matters 8/6/2009; Rhee 8/6/2009) Limbaugh apparently gets much of his information, including the Botox joke, from a right-wing blog, “Sweetness and Light,” which he credits in his statement. (Sweetness and Light 8/6/2009) The next day, Rabbi Marvin Hier of the Simon Wiesenthal Center says, “It is preposterous to try and make a connection between the president’s health care logo and the Nazi Party symbol, the Reichsadler.” (Urbina 8/7/2009) Jennifer Crider of the Democratic Congressional Campaign Committee (DCCC) responds to Limbaugh’s assertions: “Rush Limbaugh’s comparison of the Democratic Party to the Nazi Party in World War II is as disgusting as it is shocking. Limbaugh’s use of the Nazi swastika in attempting to make a tasteless political comparison has no place in the public discourse. At a time when families need real solutions to rebuild the economy and make health care more affordable, Rush Limbaugh is attempting to sidetrack the important debate through his use of symbols that are synonymous with murder and intolerance. Americans deserve better.” (Rhee 8/6/2009) Conservative columnist David Brooks of the New York Times calls Limbaugh’s rhetoric “insane.” (Media Matters 8/10/2009)

Robert Lowry. [Source: Think Progress]Members of Florida’s Southeast Broward [County] Republican Club take to the firing range for their weekly meeting, where they fire handguns, AK-47s, and AR-15s at targets. The purpose of having the meeting at a gun club, says chapter president Ed Napolitano, is to have fun, educate non-shooting members, and to send a political message: “Why are we here? Because we’re Republicans and we appreciate the fact that we have the right to bear arms,” he says. “Without the Second Amendment, I don’t think the other amendments would hold up. I think they would just be suggestions that the government would decide to do whatever they want.” However, the choice of targets causes some outrage. Most of the members shoot at traditional targets—human silhouettes—but some of the shooters use color posters depicting Arab men in traditional headdress holding rocket-propelled grenades, and one, Robert Lowry, shoots at a target with the letters “DWS” written next to the target’s head. Lowry is the Republican candidate for the district’s US House seat, running against incumbent Debbie Wasserman Schultz (D-FL), whose initials are DWS. Lowry says he didn’t write the initials on the target, but was aware of them before he began shooting. At first, he attempts to dismiss it as a “joke,” but after answering some questions on the target, he says it “was a mistake” to use a target labeled with the initials of his opponent. Wasserman Schultz says of Lowry’s action: “I find this type of action serious and disturbing. Tonight I am going to have to talk to my young children about why someone is pretending to shoot their mother. Trivializing violent behavior is the kind of extreme view that has no place in American politics.” Lowry issues a statement that reads: “Debbie Wasserman Schultz is a fine lady and we wish her and her family well. It is her continued support for harmful policies affecting seniors and her failure to act for the general benefit of US Congressional District 20 is what we take issue with.” Jennifer Crider of the Democratic Congressional Campaign Committee says: “It’s absolutely outrageous. He needs to rethink his sense of humor. It wasn’t about issues, it wasn’t about anything of substance, it was a personal attack that wasn’t called for.” Napolitano defends the club’s use of targets designed to appear as Arab terrorists, saying: “That’s our right. If we want to shoot at targets that look like that, we’re going to go ahead and do that.” (Man 10/8/2009; Sedensky 10/9/2009; Reinhard 10/11/2009)