This page can be viewed at http://www.historycommons.org/entity.jsp?entity=jennifer_hill_1

Jennifer Hill was a participant or observer in the following events: 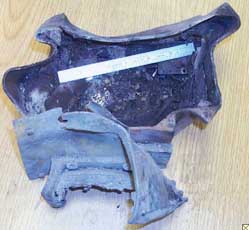 Flight 77’s damaged cockpit voice recorder. [Source: FBI]At around 3:40 a.m., investigators at the Pentagon recover the two “black boxes” from Flight 77. (Drummond 9/14/2001) These boxes are the plane’s flight data recorder and its cockpit voice recorder. (NPA 9/15/2001) Some news reports claim they are found by two Fairfax County firefighters, Carlton Burkhammer and Brian Moravitz, as they comb through debris near the impact site. (Jackman and Becker 9/19/2001; Newsweek 9/28/2001) But according to Arlington County spokesman Dick Bridges, members of the FBI’s evidence response team find them. (PBS 9/14/2001; Smith 9/14/2001) Authors Patrick Creed and Rick Newman will later clarify that Burkhammer and Moravitz find an object initially believed to be one of the black boxes, but closer inspection reveals it to be just “a charred chunk of machinery.” Subsequently, FBI photographer Jennifer Hill finds the cockpit voice recorder in a stack of rubble while assisting searchers. Thirty minutes later, a National Transportation Safety Board (NTSB) expert locates the flight data recorder in the same area. (Creed and Newman 2008, pp. 396-397 and 400-402) But Allyn Kilsheimer, a structural engineer who helps coordinate the emergency response at the Pentagon, later claims he had “found the black box,” which, he says, he had “stepped on… by accident.” (Milke 3/2002; Chertoff et al. 3/2005) Washington FBI agent Christopher Combs says, “Somebody almost threw [the black boxes] away because they didn’t know what they looked like.” (Kim 10/30/2002)
Conflicting Accounts of Where Boxes Are Found - According to Dick Bridges, the two recorders are discovered “right where the plane came into the building.” (Associated Press 9/14/2001) But the American Society of Civil Engineers’ Pentagon Building Performance Report, released in 2003, will claim that the flight data recorder was found “nearly 300 ft into the structure.” (Mlakar et al. 1/2003, pp. 40

) In Creed and Newman’s account, the recorders are found in the Pentagon’s middle C Ring, near the “punch-out” hole made by the impacting aircraft. (Creed and Newman 2008, pp. 400-402)
Boxes Taken Away for Analysis - The boxes are taken to the NTSB’s laboratory in Washington, where data is extracted from the flight data recorder, but they are reclaimed by the FBI later on in the morning. (Drummond 9/14/2001; Creed and Newman 2008, pp. 402) A flight data recorder tracks an airplane’s flight movements for the last 25 hours, while the cockpit voice recorder contains radio transmissions and sounds from the cockpit for the last 30 minutes of its flight. Both are mounted in the tail of an aircraft and are encased in very strong materials like titanium. According to American Airlines and United Airlines, the black boxes aboard Flight 77 and the other hijacked planes were modern solid-state versions, which are more resistant to damage than older magnetic tape recorders. (Associated Press 9/15/2001; NPA 9/15/2001) FBI Director Robert Mueller later says that Flight 77’s data recorder has provided altitude, speed, and other information about the flight, but the voice recorder contained “nothing useful.” (CBS News 2/25/2002) The 9/11 Commission will describe the cockpit voice recorder as being “badly burned and not recoverable.” (9/11 Commission 7/24/2004, pp. 456) According to CBS News, preliminary information shows that the cockpit voice tape “appears to be blank or erased.” (CBS News 9/16/2001) The two black boxes from Flight 93 are also recovered around this time (see September 13-14, 2001).