This page can be viewed at http://www.historycommons.org/entity.jsp?entity=jerome_valcke_1

Jerome Valcke was a participant or observer in the following events:

FIFA secretary general Jerome Valcke says that Qatar “bought” the right to hold the 2022 World Cup in a private e-mail to FIFA vice president Jack Warner. “For MBH [Mohamed bin Hammam, the leading Qatari football official who is now running for president of FIFA], I never understood why he was running. If really he thought he had a chance or just being an extreme way to express much he does not like anymore JSB [Sepp Blatter, bin Hammam’s opponent in the race]. Or he thought you can buy FIFA as they bought the WC [World Cup].” The e-mail’s date is unknown, but presumably it is written in the early spring of 2011. After the e-mail is made public in a wave of mud-slinging during the presidential election, Valcke will say that he did not mean that Qatar officials actually bribed voters: “I’d like to clarify that I may use in an email—a ‘lighter’ way of expression by nature.… What I wanted to say is that the winning bid used their financial strength to lobby for support.” (Sky News 5/30/2016) 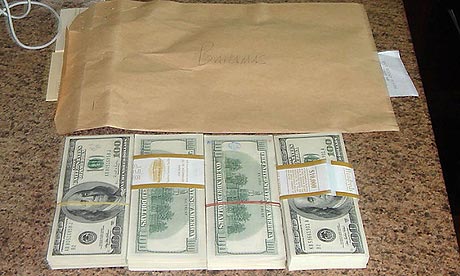 A $40,000 bribe paid on behalf of Mohamed bin Hammam to Fred Lunn, vice president of the Bahamas FA. [Source: FIFA] (click image to enlarge)Following an address to the Caribbean Football Union (CFU) by FIFA presidential candidate Mohamed bin Hammam, $40,000 bribes are handed out to CFU member offcials in an attempt to get them to vote for bin Hammam. The meeting is held at the Hyatt Regency hotel in Trinidad, where bin Hammam, who had paid for the officials’ travel and accommodation, presents his manifesto. Following the pitch, the officials, from 25 football associations, representing 25 votes out of 208, are asked to go into a conference room. The first to enter is Fred Lunn, vice president of the Bahamas FA. He is handed a large brown envelope and, when he opens it, according to a later affidavit, “stacks of US$100 fell out and on to the table.” Lunn is not authorized to accept such a gift, but is urged to do so by a CFU official. After accepting the money, he texts his superior, Bahamas FA president Anton Sealey. Sealey then calls him to say that “under no circumstances would the Bahamas FA accept such a cash gift.” Lunn takes a picture of the money and then returns to the conference room. There he finds a queue of officials waiting to collect their bribes, which prompts him to again text Sealey: “[A] lot of the boys taking the cash, this is sad given the breaking news on the TV CNN [about corruption charges in the 2022 World Cup bid process].… I’m truly surprised its happening at this conference.” Sealey’s reply is: “I’m disappointed but not surprised. It is important that [we] maintain our integrity when the story is told. That money will not make or break our association. You can leave with your head high.” The next morning Lunn attends a CFU meeting addressed by FIFA vice president and CONCACAF president Jack Warner. “Mr Warner stated that he had instructed Mr Bin Hammam to bring the cash equivalent of any gift he had intended to bring for the people attending this meeting,” Lunn will later say in the affidavit. “Mr Warner then stated that the money could be used for any purpose… for grass-roots programs or any purpose the individuals saw fit.” By this time Sealey has informed CONCACAF official Chuck Blazer, who will have a report prepared into the matter at the request of FFIA secretary general Jerome Valcke and then go public with the allegations (see May 24, 2011). (Press Association (London) 5/30/2011)

FIFA presidential candidate Mohamed bin Hammam refers his opponent, the incumbent Sepp Blatter, for an ethics invesigation. This follows the opening of an ethics investigation into bin Hammam, who offered bribes to 25 voters in the Caribbean (see May 10, 2011, May 24, 2011, and May 25, 2011). According to bin Hammam, the report into the matter that forms the basis of the charges against him contains “statements according to which Mr Blatter, the incumbent Fifa president, was informed of, but did not oppose, payments allegedly made to members of the Caribbean Football Union.” Reportedly, FIFA vice president Jack Warner, who is also under an ethics investigation, told Blatter of the payments. If this were true, it would be an ethics violation by Blatter, as FIFA officials are under a duty to disclose any evidence of improper conduct to the organization’s secretary general. Bin Hammam’s allegations are first made in a letter to FIFA secretary general Jerome Valcke, but are then reported in the media. (Gibson 5/26/2011) FIFA’s ethics committee will open an investigation of Blatter (see May 26, 2011).

FIFA’s ethics committee opens an investigation into the organization’s president, Sepp Blatter. The investigation was proposed by Blatter’s presidential rival in a forthcoming election, Mohamed bin Hammam (see May 26, 2011). According to bin Hammam, Blatter knew of but did not oppose bribes bin Hammam is said to have offered 25 presidential voters. Blatter did not report the bribes, although FIFA’s code of ethics apparently places a duty to report such conduct on all officials. (Wilson 5/27/2011) The ethics committee will clear Blatter of the allegations, saying the bribes had not actually been paid when he learned of them, so there was no duty to report (see May 29, 2011).