This page can be viewed at http://www.historycommons.org/entity.jsp?entity=jerry_vines_1

Jerry Vines was a participant or observer in the following events: 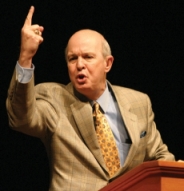 The Reverend Jerry Vines. [Source: Thomas White]Reverend Jerry Vines, pastor of a large Baptist church in Florida, denounces Islam as being responsible for the 9/11 attacks, and criticizes America’s propensity for “religious pluralism” as making the nation vulnerable to further attacks as well as causing other social ills. In his statement, made to an audience at the Southern Baptist Convention (SBC), Vines insults Islam and its founder, the Prophet Muhammed: “They would have us believe that Islam is just as good as Christianity,” Vines says. “Christianity was founded by the virgin-born son of God, Jesus Christ. Islam was founded by Muhammad, a demon-possessed pedophile who had 12 wives, the last one of which was a 9-year-old girl.” Muslims do not worship the same god as Christians do, he adds: “And I will tell you Allah is not Jehovah, either. Jehovah’s not going to turn you into a terrorist.” White House press secretary Scott McClellan says after Vines’s remarks that President Bush “believes Islam is a religion that teaches peace. The president believes in religious tolerance and respects people of all faiths.” The day after Vines’s incendiary remarks, Bush addresses the SBC meeting via satellite to extol Baptists’ tolerance, praising their “extraordinary influence” on American history and saying, “Baptists were among the earliest champions of religious tolerance and freedom.” Vines’s remarks echo earlier attacks on Islam by other prominent evangelicals, including Franklin Graham (see October 2001). Other evangelical Christians, including the Reverend Jerry Falwell, rush to support Vines’s remarks, but Jewish leaders and mainstream Protestant groups join American Muslims in denouncing the remarks. Abraham Foxman, the director of the Jewish Anti-Defamation League, calls Vines’s remarks “deplorable,” and says such inflammatory language is “not surprising coming from the leadership of the Southern Baptist Convention, which has a track record of denigrating and delegitimizing other religions.” (Cooperman 6/20/2002)