This page can be viewed at http://www.historycommons.org/entity.jsp?entity=jessica_smith_1

Jessica Smith was a participant or observer in the following events:

March 13, 2008: Democrats Move to Forbid Implementation of ‘Treaty’ with Iraq without Congressional Approval 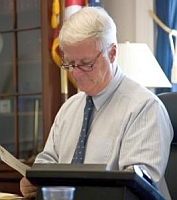 William Delahunt. [Source: US House of Representatives]Democratic House members William Delahunt (D-MA) and Rosa DeLauro (D-CT) announce legislation that will prohibit the use of federal funds to implement any long-term diplomatic and security agreement the Bush administration may enter into with the Iraqi government (see March 7, 2008). The Bush administration has not yet acknowledged that such a pact requires the approval of Congress; Delahunt and DeLauro say that such approval is mandated by the Constitution. The White House disagrees, saying that the entire controversy was triggered by what it calls a sloppy Arabic-to-English translation of the “Declaration of Principles” agreed to by President Bush and Prime Minister Nouri al-Maliki (see November 26, 2007); the declaration serves as the basis for the proposed agreement. The declaration states that the US will provide “security assurances and commitments to the Republic of Iraq to deter foreign aggression against Iraq that violates its sovereignty and integrity of its territories, waters or airspace.” Such an agreement would be a long-term military commitment in Iraq and would, therefore, be a treaty. Treaties must be ratified by a two-thirds vote of the Senate. But a senior administration official says the translation of the “security assurances” phrase “was something we struggled with.” He says the original Arabic phrase was “translated in kind of an interesting way,” and a better translation might have been, “We’ll consult.” Democrats are skeptical of the White House explanation. Senator Jim Webb (D-VA) says that when senators were recently briefed on the planned agreement, they “certainly did not speak to this unfortunate translation from Arabic.” Delahunt, who has co-chaired several hearings on the legality of the agreement, says he hasn’t heard this either, and says, “If it’s sloppy language, it borders on irresponsible to use words like ‘security assurances’ or ‘security commitments’ [when] their customary interpretation would be binding.” Bush officials say that Congress was indeed told about the problematic translation. Delahunt says he believes that the administration, having been “outed, if you will” by Congressional oversight, has decided that it is the “safe course” to argue that the words are not what they appear to be. And Webb’s spokeswoman, Jessica Smith, wonders why the White House did not “retranslate” the troublesome phrase before releasing the declaration. A Bush official says that the final version of the agreement will use the phrasing “consult” rather than “security assurances.” “There aren’t many countries that we give security guarantees to,” he says. (Politico 3/13/2008)