This page can be viewed at http://www.historycommons.org/entity.jsp?entity=jim_demint_1

Jim DeMint was a participant or observer in the following events: 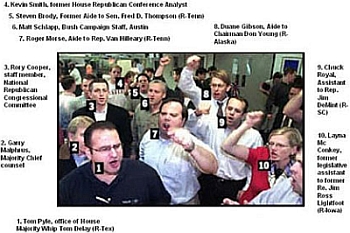 February 13, 2009 and After: Republicans Falsely Claim Stimulus Package to Include ‘Levitating Train’ from ‘Las Vegas to Disneyland’

House Minority Leader John Boehner (R-OH) accuses the Obama administration of colluding with Democrats to include a “high-speed rail system” from “Las Vegas [Nevada] to Disneyland” in the administration’s economic stimulus package. “Tell me how spending $8 billion in this bill to have a high-speed rail line between Los Angeles and Las Vegas is going to help the construction worker in my district,” he demands. (US House of Representatives 2/13/2009)
Claim at Odds with Facts - Boehner is joined in the claim by several of his House Republican colleagues, including Patrick McHenry (R-NC), Thaddeus McCotter (R-MI), and Candice Miller (R-MI), as well as Republican Senators John McCain (R-AZ) and Jim DeMint (R-SC). Governor Bobby Jindal (R-LA) includes the claim in his response to President Obama’s address to Congress regarding the stimulus package. Many of these lawmakers add the accusation that the supposed rail line, which they call a “levitating train,” is an earmark inserted for Senate Majority Harry Reid (D-NV), whose state would benefit from the rail line. In reality, the stimulus bill does not set aside any money at all for a train of any kind between Los Angeles and Las Vegas. The bill does provide $8 billion for unspecified high-speed rail projects, which includes “magnetic levitation,” or maglev, train systems. The money will be allocated by Transportation Secretary Ray LaHood, one of two Republican holdovers from the Bush administration in President Obama’s cabinet. A Department of Transportation spokesperson says it is “premature to speculate” about what exactly will be funded; the nonpartisan Taxpayers for Common Sense says there is “no way that this provision is an earmark for Senator Reid.” The governors of Nevada and California—both Republicans—have indicated they would support such a maglev line between those two cities. The nonpartisan site FactCheck.org writes: “We can’t predict the future, and it’s certainly within the realm of possibility that the Republican who is Obama’s transportation secretary will decide to devote the entire $8 billion to a project that is nowhere near shovel-ready and that the Federal Railroad Administration says is not cost-effective—all for the benefit of the Democratic majority leader. But we wouldn’t bet on it.” (FactCheck (.org) 2/25/2009; Cooper 2/25/2009) The Center for American Progress notes that Republicans mock the idea of “levitating trains” because, apparently, “they [think] the term sounds funny.” FactCheck observes, “In truth, ‘levitating’ trains really do exist—but they are properly called maglev trains, and they are high-tech marvels” employed in Japan, among other places. (FactCheck (.org) 2/25/2009; Frick 3/2/2009)
Plans Include Ohio Lines - While there are no plans for a train line of any kind between California and Nevada in the stimulus package, there are at least two proposals for rail lines in and out of Ohio, Boehner’s state. The plans under consideration include a Cleveland-Toledo-Chicago line and a Cleveland-Columbus-Cincinnati-Indianapolis line. (Yglesias 2/13/2009)
Train to Las Vegas Brothel? - In March, a Republican House member will claim that the supposed “levitating train” will not just go to Las Vegas, but to a brothel. The claim is entirely false (see March 2, 2009).

Republicans intend to use the fight over health care reform to “break” President Obama, says at least one Republican senator. Jim DeMint (R-SC) joins other Republican lawmakers in a conference call with so-called “tea party” organizers (see April 14, 2009, April 15, 2009, May 29, 2009, August 4, 2009, August 5, 2009, and Before August 6, 2009) to plan how to use town hall confrontations with Democratic lawmakers to help stall any health care reform bill from being voted on in Congress until at least after the August recess. The call was organized by the lobbying organization Conservatives for Patients Rights (CPR). “I can almost guarantee you this thing won’t pass before August, and if we can hold it back until we go home for a month’s break in August,” members of Congress will hear from “outraged” constituents, DeMint says. “Senators and Congressmen will come back in September afraid to vote against the American people.… [T]his health care issue is D-Day for freedom in America. If we’re able to stop Obama on this it will be his Waterloo. It will break him.” One of the talking points from CPR is to characterize the reform package as a “government takeover” of health care. (Smith 7/17/2009) When Obama says on PBS that “[w]hat they [DeMint and other Republicans] don’t recognize is, this isn’t about me; it’s about the American people… [a]nd things have gotten worse since 1993,” DeMint takes to Fox News to say the argument is about “socialism versus freedom,” and challenge Obama to a debate. “So, I’m glad to have the debate with him,” DeMint says, “but frankly, I’ve been working on health care for over 10 years. I think I know a lot more about how it works than he does. So I’m ready.” (Corley 7/22/2009)

September 13, 2010: Delaware Republican Chairman Threatened with ‘Bullet in the Head’ for Not Supporting Tea Party Candidate

Delaware Republican Party chairman Tom Ross receives a death threat over his support for incumbent Mike Castle (R-DE) in the upcoming Delaware Senate primaries. Castle, a House member widely considered to be a moderate Republican (see June 30, 2009), is opposed by Christine O’Donnell, a hard-right Republican who has received the support of several area “tea party” organizations. Ross receives an email telling him that he deserves “a bullet in the head” for backing “political _ss-kissing RINO’s” [Republicans in name only]. The email continues: “It is one thing to have your country screwed over by socialists, it is far worse to be backstabbed by people pretending to be your friends. We will either rid the GOP of pieces of sh_t like you, or we will start a new ‘Common Sense Conservative’ party and render you all useless.” Ross leaves his home temporarily in fear for his life, and the US Department of Justice mounts an investigation. The email contains the name and address of the sender, though that information will not be made public. “It is just scary what is going on right now,” says a Delaware Republican Party official. “Tom is a loyal and dedicated Republican officer in Delaware… the position is unpaid and his job as party chairman is to defend and promote the candidates.… It is disgusting, it is amazing, and it has no place in our democracy.” In a statement, O’Donnell’s campaign condemns the threat, saying, “We hope Mr. Ross and his family are safe, as no one should have to go through personal attacks like this.” Reporter Sam Stein concludes: “Coming at the end of an emotional and hard-fought campaign, it’s difficult to gauge both the purpose and the fallout of the death threat. If confirmed as both serious and sincere, it provides yet another piece of evidence that recently politics has veered into something more troubling than previously seen. O’Donnell supporters, undoubtedly, will be skeptical of the story’s emergence at this late stage of the primary fight, noting that Castle is the primary beneficiary if her candidacy is seen as inspiring political intolerance, if not downright violence.” (Stein 9/13/2010; Barr 9/14/2010) Ross has been highly critical of O’Donnell’s campaign, stating that Delaware voters “are laughing” at her (see November 15, 2007), and has said that if she wins the primary, she is almost certain to lose against her Democratic opponent, county executive Chris Coons, in the November elections. Tea Party Express chairwoman Amy Kremer, of Sacramento, California, says of Ross’s criticisms: “Can you imagine the mess Tom Ross will have created when he is Delaware Republican Party chairman on Tuesday night when Christine O’Donnell becomes the Republican nominee for US Senate? It’s unacceptable, and Tom Ross must quit or be fired immediately. He is a walking disaster.” Current polls show Castle and O’Donnell in a statistical dead heat. O’Donnell has the support of several right-wing conservative groups, including the Senate Conservatives Fund, a group founded by Senator Jim DeMint (R-SC). (Gannett News Service 9/5/2010; Catanese 9/13/2010) Recent reports have shown that O’Donnell has raised little money within Delaware, but has benefited greatly from “tea party” and other fundraising on her behalf in other states. (Gannett News Service 9/5/2010) O’Donnell will win the Delaware primary. Castle will call the campaign the most unpleasant of his career. (USA Today 9/5/2010)