This page can be viewed at http://www.historycommons.org/entity.jsp?entity=john_czabaranek_1

John Czabaranek was a participant or observer in the following events: 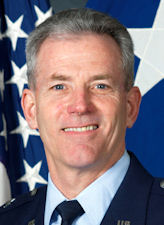 Brian Meenan. [Source: US Air Force]The Air Traffic Services Cell (ATSC)—a small office at the FAA’s Command Center in Herndon, Virginia, manned by military reservists—is activated.
Officers Learn of Attacks - Three officers are currently on duty in the ATSC: Colonel John Czabaranek, Lieutenant Colonel Michael-Anne Cherry, and Major Kevin Bridges. Colonel Brian Meenan, the director of the cell, is not in the ATSC at this time, and so Czabaranek, his deputy, is currently in charge. Czabaranek, Cherry, and Bridges learned of the first attack in New York at around 8:55 a.m. when another employee at the Command Center told them to turn on CNN, because an aircraft had crashed into the World Trade Center. The three officers initially thought the crash was an accident, but realized it was not when they saw the second aircraft hitting the WTC at 9:03 a.m. They then established contact with the Air Force Ops Center.
Cell Activated, Though Timing Unclear - The ATSC is activated, although the exact time this happens at is unclear. According to Aviation Week and Space Technology magazine, the cell “quickly became a key communications node during the military’s response to [the] terrorist attacks.” (US Air Force 9/11/2001; Scott 6/10/2002) Jeff Griffith, the FAA’s deputy director of air traffic control, will tell the 9/11 Commission that “the military officers assigned to the Air Traffic Services Cell became immediately involved in coordinating FAA… Command Center actions with military elements.” (9/11 Commission 6/9/2004

) According to a chronology of the ATSC’s actions on this day, calls to activate the cell are apparently made at unspecified times following the second attack in New York and before the FAA’s ground stop (at 9:26 a.m.). These calls are made by a Lieutenant Colonel Mahoney and a Colonel Litzenberger from the Air Force Ops Center. Apparently shortly after the calls are made, Czabaranek contacts NORAD to let it know that the ATSC is “up and running.” (US Air Force 9/11/2001)
Military Cell Aided by Recently-Installed Hardware - The ATSC’s response to the terrorist attacks benefits from the fact that, six weeks earlier, the cell had a secure terminal to access the SIPRNET—the military’s classified version of the Internet—installed, along with other hardware, which significantly enhances the movement of vital information. According to Meenan, because the cell has the SIPRNET terminal, “we could immediately look at NORAD and [Defense Department] plans as they evolved; filter, package, and format them, then walk out to the [FAA] national operations manager—who had control of the entire national airspace system—and give him current visibility into… fighter, tanker, and support aircraft activities. It cut down our response time tremendously.” (Scott 6/10/2002)
ATSC Is a Bridge between FAA and Military - The ATSC is a “part-time military outfit, staffed by part-time Air Force Reserve members” who “provide a bridge between the civilian and military worlds when air traffic issues arise,” according to the Air Force Times. For example, “During a crisis, the armed forces suddenly may need to inject a large number of military airplanes into a sky that typically handles only a few hundred.” (Dorr 2000) However, Czabaranek will tell the 9/11 Commission that the ATSC is “not part of [the] FAA/NORAD hijack notification process.” (9/11 Commission 4/14/2004)
Presence of ATSC Officers a 'Fluke' - According to Aviation Week and Space Technology, the presence of the three ATSC officers at the FAA Command Center this morning is a “fluke,” since the Pentagon staffs the military cell “only three days per month for refresher training, but September 11 happened to be one of those days.” (Bond 12/17/2001)
Cell Handles Aircraft after Airspace Shut Down - Later in the day, after the national airspace has been shut down (see (9:45 a.m.) September 11, 2001), the ATSC personnel will coordinate actions relating to military and other special flights that are permitted to fly. (9/11 Commission 2003) They will be responsible for validating the requests they receive for the movement of aircraft, and issuing permissions in response to those requests. (Federal Aviation Administration 3/21/2002)

Two officers in the Air Traffic Services Cell (ATSC)—a small office at the FAA’s Command Center in Herndon, Virginia, manned by military reservists—contact the National Military Command Center (NMCC) at the Pentagon, to ask about military assistance in response to the terrorist attacks. (US Air Force 9/11/2001; Scott 6/10/2002; 9/11 Commission 4/14/2004)
Military Leaders 'in a Meeting to Determine Their Response' - Apparently shortly after the south World Trade Center tower is hit at 9:03 a.m., Ben Sliney, the national operations manager at the Command Center, asks the ATSC for a military response to the ongoing events (see 9:06 a.m. and After September 11, 2001). Therefore, Lieutenant Colonel Michael-Anne Cherry, one of the three officers on duty in the ATSC, calls the NMCC. However, according to a chronology of the ATSC’s actions on this day, Cherry is told that “senior leaders” at the NMCC are “in a meeting to determine their response” to the attacks, and will call back.
Second Officer Calls NMCC, Told Fighters Have Been Launched - Then, at around 9:08 a.m., Sliney talks to another of the officers on duty in the ATSC, Colonel John Czabaranek, and asks if fighter jets have been launched toward New York. (US Air Force 9/11/2001; 9/11 Commission 4/14/2004) Two F-15s have already taken off from Otis Air National Guard Base, Massachusetts, toward the New York area (see 8:46 a.m. September 11, 2001), but, according to the 9/11 Commission, “Lacking a target,” these fighters have been “vectored toward military-controlled airspace off the Long Island coast” (see (8:53 a.m.-9:05 a.m.) September 11, 2001). (9/11 Commission 7/24/2004, pp. 20) In response to Sliney’s inquiry, Czabaranek calls the NMCC. The NMCC indicates that it is aware of the request for fighter support, and says aircraft have been scrambled from Otis Air Base. Czabaranek passes this information on to Sliney, telling him that fighters are en route.
ATSC's Secure Phones Initially Not Working - According to the chronology of the ATSC’s actions, the unit’s secure phones do not work for an incoming call from the NMCC that is apparently made shortly after 9:03 a.m. The ATSC’s keys for its secure phones are recalibrated, and the phones then “worked fine.” (US Air Force 9/11/2001; 9/11 Commission 4/14/2004)

After 9:34 a.m. September 11, 2001: Military Liaisons at FAA Command Center Said to Be Informed of Flight 93 Hijacking

Military officers at the FAA’s Command Center are informed of the hijacking of Flight 93, according to the FAA’s National Operations Manager Ben Sliney. If such notification is given, it is presumably shortly after the Command Center learns of the hijacking (see 9:34 a.m. September 11, 2001). Sliney will later tell the 9/11 Commission: “Available to us at the Command Center of course is the military cell, which was our liaison with the military services. They were present at all of the events that occurred on 9/11.” He will add, “The normal protocols for the events that were transpiring then—that is to say hijacked aircraft, which requires a notification to NORAD—those, at least I was given to understand, were made promptly—the notifications on each hijack.” The FAA’s acting Deputy Administrator Monte Belger will add: “[T]here were military people on duty at the FAA Command Center, as Mr. Sliney said. They were participating in what was going on. There were military people in the FAA’s Air Traffic Organization in a situation room. They were participating in what was going on.” (9/11 Commission 6/17/2004) If the cell is notified, it is unclear what, if anything, the military liaison officers—Colonel John Czabaranek, Lieutenant Colonel Michael-Anne Cherry, and Major Kevin Bridges (see (Between 9:04 a.m. and 9:25 a.m.) September 11, 2001)—at the Command Center do with the information about Flight 93’s hijacking. The 9/11 Commission will say that the first notification to the military about Flight 93 comes at 10:07 a.m. (see 10:05 a.m.-10:08 a.m. September 11, 2001).