This page can be viewed at http://www.historycommons.org/entity.jsp?entity=john_darrell_sherwood_1

John Darrell Sherwood was a participant or observer in the following events:

Shortly Before 9:35 a.m. September 11, 2001: Park Police Helicopter Is Instructed to Intercept the Plane Approaching the Pentagon

A helicopter belonging to the US Park Police Aviation Unit. [Source: United States Park Police]A US Park Police helicopter is directed to intercept the aircraft that subsequently hits the Pentagon, according to the later statements of US Navy historian John Darrell Sherwood. The helicopter’s pilot reportedly describes the incident when later interviewed by a US Marine Corps historian. Details of the pilot’s account are then revealed by Sherwood, who is a colleague of the Marine Corps historian, while he is interviewing Jeffrey Mark Parsons of the United States Border Patrol about his experiences of the 9/11 attacks.
Pilot Is Told to Prevent the Plane from Hitting the Pentagon - According to Sherwood, the helicopter pilot, who is “an aviation sergeant with the United States Park Police,” is “in the area [of the Pentagon] and he got a call saying, ‘Try to intercept this plane, try to distract the plane, try to do something to, you know, prevent the plane from going into the Pentagon.’” It is unclear from what Sherwood says whether the helicopter is on the ground or already airborne at this time. In response to the instruction, the helicopter goes “to try to distract” the approaching aircraft.
Helicopter Is Witnessed near the Pentagon - What is apparently this Park Police helicopter is then witnessed by Parsons out of a window on the 17th floor of the hotel he is staying at. Parsons sees it flying toward the helicopter landing pad at the Pentagon, two or three minutes before the Pentagon is attacked. (Parsons 12/13/2001; Goldberg et al. 2007, pp. 258) Other individuals near or inside the Pentagon see what is presumably the same helicopter around this time (see (9:35 a.m.-9:36 a.m.) September 11, 2001 and Shortly Before 9:37 a.m. September 11, 2001). (CNN 9/11/2001; Washington Post 9/5/2002; Priess 2016, pp. 244-245) Parsons has been staying at the Marriott Residence Inn in Arlington, near the Pentagon, for almost a month, but, he will recall, he has “never seen a helicopter approach the Pentagon from that direction before.”
Pilot Sees the Pentagon Attack - At some point, the helicopter lands for a period near the Pentagon. According to Sherwood, it “landed, at one point, near the Memorial Bridge, and there’s that strip of land before you get to the Memorial Cemetery.” Its pilot reportedly witnesses the attack on the Pentagon. He “saw the plane go in, and then the next thing he started doing is medevacing people out of there,” according to Sherwood. When told while being interviewed by Sherwood that the helicopter pilot is instructed to intercept a plane approaching the Pentagon, Parsons will ask, “Then they knew [the plane] was headed toward the Pentagon before it actually hit the Pentagon, then?” To this, Sherwood will only answer, “I guess that helicopter swung around, but by the time he got around, the plane was already into the building.”
Park Police Flies Huey Helicopters - The helicopter is a white and blue Huey, according to Sherwood. (Parsons 12/13/2001) The Park Police Aviation Unit has two Bell 412 helicopters. (Wagstaff 10/1/2001; Forror 11/2001; Forror 2/2002; National Park Service 10/16/2004) (The Bell 412 is a more modern version of the “Huey” helicopter. (Brzezinski 8/24/2003; Hawley 10/25/2007) ) The aviation unit is located in Anacostia Park in southeast Washington, across the Potomac River from the Pentagon. (Wagstaff 10/1/2001; National Park Service 10/16/2004)
Witness Will Be Told, 'Don't Tell Anyone about' the Incident - Most accounts of the unit’s actions on this day will make no mention of this incident, and only describe Park Police helicopters taking off in the minutes after the attack on the Pentagon (see Shortly After 9:37 a.m. September 11, 2001). (Forror 11/2001; NBC 4 9/11/2003; McDonnell 2004, pp. 20

; Goldberg et al. 2007, pp. 161-162) However, it appears there may be an attempt to keep the incident secret. After Parsons recalls seeing the helicopter near the Pentagon minutes before the attack there, Sherwood will instruct him: “Don’t tell anyone about that story, because that’s one of our, I think that’s one of the best stories that’s going to come out of this. We don’t want the press to get this.” (Parsons 12/13/2001)

A number of witnesses see a helicopter flying near the Pentagon in the minutes before the attack there.

Jeffrey Mark Parsons, an assistant chief patrol agent with the United States Border Patrol, sees a blue and white helicopter that appears as if it is coming in to land, from a window on the 17th floor of the hotel he is staying at, near the Pentagon. Parsons will later recall that two or three minutes before the Pentagon attack occurs: “I saw [the helicopter] circle… between the hotel and the Pentagon, going toward the landing pad [at the Pentagon] where that airliner ultimately hit. And I thought that he landed on the pad.” Parsons will say the helicopter flies in at “a weird angle,” and recall that he has been staying at the Marriott Residence Inn in Arlington for almost a month, but has “never seen a helicopter approach the Pentagon from that direction before.” He will recognize the helicopter as a Huey because he has flown Hueys and knows they make “a very distinct sound.” According to John Darrell Sherwood, a Navy historian who interviews Parsons about the incident, the helicopter belongs to the US Park Police and has been instructed to intercept the aircraft that subsequently hits the Pentagon (see Shortly Before 9:35 a.m. September 11, 2001). (Parsons 12/13/2001; Goldberg et al. 2007, pp. 258)

Jennifer Reichert, who is stuck in traffic on Route 27 in front of the Pentagon, will describe that just before the attack, “A helicopter takes off from the heliport at the Pentagon.” She will add: “Minutes—maybe seconds—later, I hear it: American Airlines Flight 77 screams toward the Pentagon. The explosion [of the crash] shakes my car.” (Washington Post 9/5/2002)

Secretary of Defense Donald Rumsfeld and Denny Watson, his CIA briefer, who are in Rumsfeld’s office at the Pentagon, see a helicopter flying very close to the building, outside the window of the office, and then pulling away just before the building is attacked (see Shortly Before 9:37 a.m. September 11, 2001). (Priess 2016, pp. 244-245)
Perhaps due to the presence of this helicopter in the area, some people will initially think the attack on the Pentagon involves a helicopter hitting the building. Captain William Durm, the commander of the Pentagon’s Triservice Dental Clinic, will head to the building’s center courtyard shortly after the Pentagon is hit. Someone there will tell him a helicopter has hit the other side of the building. (Office of Medical History 9/2004, pp. 11) Some early news reports will suggest a helicopter crashed into the Pentagon. (Thomas Crosbie Media 9/11/2001; Geisler 9/2/2002) One report will claim that “one aircraft and a helicopter have crashed into the Pentagon.” (Airline Industry Information 9/11/2001) Vice President Dick Cheney will tell NBC’s Meet the Press that “the first reports on the Pentagon attack suggested a helicopter” hit the building. (Cheney 9/16/2001) The Guardian will report that one witness claims the explosion that occurs when the Pentagon is hit blows up a helicopter circling overhead. (Borger et al. 9/12/2001) New York Times columnist William Safire will report that, at approximately this time, Cheney is told that either another plane or “a helicopter loaded with explosives” is heading for the White House. (Safire 9/13/2001) 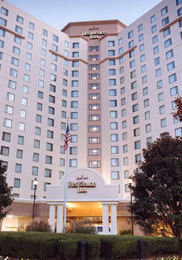 The Marriott Residence Inn in Arlington, Virginia. [Source: Marriott International]An American Airlines plane takes off from Ronald Reagan Washington National Airport, flying toward the Pentagon, just before the Pentagon attack occurs, according to a witness who says he sees the plane out the window of his hotel room.
Plane Takes Off toward Pentagon - Jeffrey Mark Parsons, an assistant chief patrol agent with the United States Border Patrol, is staying on the 17th floor of the Marriott Residence Inn in Arlington, Virginia. When later interviewed by Navy historian John Darrell Sherwood about his experiences of the 9/11 attacks, Parsons will recall: “I was looking out my window. I have a perfect view of Reagan National Airport. An American Airlines plane had just taken off, I mean, not 30 seconds before this plane [Flight 77] hit the Pentagon.” Parsons will add that the American Airlines plane is “taking off to the north, to the, different than the normal way. In other words, they were taking off toward the Pentagon.” (Parsons 12/13/2001; Goldberg et al. 2007, pp. 258) Reagan National Airport is less than a mile from the Pentagon. (Adair and Garza 10/3/2001) Parsons will continue, “Well, this American Airlines plane had just taken off, I mean it couldn’t have been a minute, 30 seconds before this plane [Flight 77] hit the Pentagon.” (Parsons 12/13/2001) Flight 77 hits the Pentagon at 9:37 a.m. (see 9:37 a.m. September 11, 2001) and, like the plane Parsons sees, is an American Airlines aircraft. (9/11 Commission 7/24/2004, pp. 10)
American Airlines and Reagan Airport Planes Supposedly Grounded - And yet Chris Stephenson, the supervisor in the Reagan National Airport control tower, reportedly stopped takeoffs from Reagan Airport in the minutes after 9:03 a.m., when Flight 175 hit the World Trade Center (see (9:04 a.m.-9:11 a.m.) September 11, 2001). (Levin 8/11/2002) And at 9:00 a.m., American Airlines ordered all its aircraft in the Northeast United States that had not yet taken off to remain on the ground (see Between 9:00 a.m. and 9:10 a.m. September 11, 2001). (9/11 Commission 8/26/2004, pp. 30) Furthermore, the FAA ordered a nationwide ground stop at around 9:26 a.m., which was supposed to prevent any aircraft taking off across the US (see (9:26 a.m.) September 11, 2001). (US Congress. House. Committee On Transportation And Infrastructure 9/21/2001; 9/11 Commission 7/24/2004, pp. 25) Parsons will ask Sherwood if anyone has interviewed the pilot of the American Airlines plane he saw taking off, since that pilot must have witnessed the attack on the Pentagon. Sherwood will answer no, but add, “[T]hat’s another good lead for either myself or one of the other people to follow up on.” Whether the pilot is ever identified or interviewed is unknown. (Parsons 12/13/2001)