This page can be viewed at http://www.historycommons.org/entity.jsp?entity=john_glenn_1

John Glenn was a participant or observer in the following events:

Despite the passage of two amendments dealing with Pakistan’s nuclear program in August 1985 (see August 1985 and August 1985), the Reagan and Bush administrations will fail to keep Congress properly informed of incidents related to Pakistan’s acquisition of components for its nuclear program, even though such notification is required by law. Senator John Glenn (D-OH), chairman of the Governmental Affairs Committee, and Congressman Stephen Solarz (D-NY), Chairman of the House Asian and Pacific Affairs Subcommittee, will later say that they are not formally briefed about any significant Pakistani procurement, with the exception of one case (see July 1987 or Shortly After), during this period. For example, Glenn will later say he should have been briefed about a nuclear scare involving Pakistan and India in 1990 (see January-May 1990) (Hersh 3/29/1993)

May 17, 1987 and After: USS ‘Stark’ Attacked by Iraqi Warplane, 37 Sailors Die; US Holds Iran Responsible 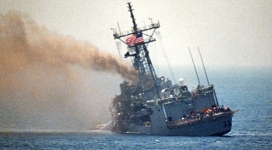 USS ‘Stark’ after being struck by Iraqi missile. [Source: US Department of Defense]Two missiles from an Iraqi F-1 Mirage warplane strike the USS Stark, killing 37 of the sailors aboard. The frigate is a member of a US naval task force sent to the Persian Gulf to keep the Gulf open for shipping during the Iran-Iraq War. The Iraqi fighter locks weapons on the Stark three minutes before firing; the commander of the ship refuses to issue the standard “back off” warning to the Iraqi pilot. The first missile bores deep into the ship but fails to explode; the second missile explodes, incinerating the crew’s quarters, the radar room, and the combat information center. The ship burns for two days. (PBS 2000; Peniston 2006, pp. 61-63)
Diverting Blame onto Iran - The Pentagon later claims that the Stark indeed warned the fighter pilot not to approach. Iraq quickly apologizes for the attack. The US continues to patrol the Gulf, and continues its program of re-registering Kuwaiti oil tankers under the American flag in order to protect them from Iranian attacks. A diplomat says that given the scale of casualties in the incident, the American public is going to start asking “what the hell is the US doing in the Gulf?” Iran calls the attack on the Stark a “divine blessing.” US officials quickly divert blame for the attack on Iran, accepting an Iraqi explanation that the fighter pilot must have mistaken the US warship for an Iranian vessel. (Brummer and Hirst 5/19/1987)
Excusing Iraq, Punishing 'Stark' Commander - “We’ve never considered them hostile at all,” says President Reagan in regards to Iraq’s military. “They’ve never been in any way hostile.… And the villain in the piece is Iran.” Senator John Warner (R-VA), a former secretary of the Navy, denounces Iran as “a belligerent that knows no rules, no morals.” Fellow senator John Glenn (D-OH) calls Iran “the sponsor of terrorism and the hijacker of airliners.” Iraq later determines that the Stark was in its so-called “forbidden zone,” and refuses to produce the pilot for any disciplinary action. The only punishment for the attack is suffered by the captain of the Stark, Glenn Brindel, who is relieved of his command, and his executive officer, who is punished for “dereliction of duty.” (Constantino 5/3/2007)
Lawsuits Dismissed - Two wrongful death lawsuits arising from the attacks will later be dismissed due to the “state secrets” privilege (see June 13, 1991 and September 16, 1992).

December 18, 1987: Congress Approves Hundreds of Millions of Dollars for Pakistan, Despite US Knowledge of Nuclear Weapons Program

Although the US is already aware that the Soviet Union intends to withdraw from Afghanistan (see November 1986-November 1987) and a formal agreement on the Soviet withdrawal will be signed in four months (see April 1988), the US Congress approves aid of $480 million for Pakistan, despite its nuclear weapons program. Legislation has been passed that automatically cuts off aid to countries with illicit nuclear weapons programs (see August 1985 and August 1985), but this legislation is not invoked. Despite apparently knowing of the Pakistani program, Congress decides that supporting the war in Afghanistan is more important (see July 1987 or Shortly After and Late 1980s). Some lawmakers and officials will later say that at this time “everybody in Congress” knows that Pakistan has a nuclear weapons program (see Late 1980s), and anti-proliferation Senator John Glenn (D-OH) will later say the threat of nuclear proliferation “is a far greater danger to the world than being afraid to cut off the flow of aid to Afghanistan,” adding, “It’s the short-term versus the long-term.” (Hersh 3/29/1993)

October 1990: US Imposes Sanctions on Pakistan

Since 1985, US Congress has required that sanctions be imposed on Pakistan if there is evidence that Pakistan is developing a nuclear weapons program (see August 1985-October 1990). With the Soviet-Afghan war over, President Bush finally acknowledges widespread evidence of Pakistan’s nuclear program and cuts off all US military and economic aid to Pakistan. However, it appears some military aid will still get through. For instance, in 1992, Senator John Glenn will write, “Shockingly, testimony by Secretary of State James Baker this year revealed that the administration has continued to allow Pakistan to purchase munitions through commercial transactions, despite the explicit, unambiguous intent of Congress that ‘no military equipment or technology shall be sold or transferred to Pakistan.’” (Glenn 6/26/1992) These sanctions will be officially lifted a short time after 9/11.

September 21, 1995: Senate Lifts Some US Sanctions on Pakistan

The US Senate votes to lift some sanctions that were imposed on Pakistan due to its nuclear weapons program (see August 1985 and October 1990). The measure does not allow the US to sell Pakistan embargoed F-16 fighters, but, according to authors Adrian Levy and Catherine Scott-Clark, only leads to “a few million dollars being dispatched to a handful of Pakistan-based charities.” The amendment was proposed by Hank Brown (R-CO), chairman of a subcommittee of the Senate Foreign Relations Committee. The measure is opposed by John Glenn and other like-minded senators strongly against nuclear proliferation, but passes by one vote. Levy and Scott-Clark will comment, “It [the measure] was not a remedy and did nothing to bolster the fragile [Pakistani] democracy that had gone 10 rounds in the ring with the military and its ISI.” (Levy and Scott-Clark 2007, pp. 265, 513)

Shortly After 9:03 a.m. September 11, 2001: Capitol Building Not Evacuated, despite Being a Possible Target

John Glenn. [Source: John Glenn Archives, Ohio State University]Despite being a potential target for terrorists, the US Capitol building in Washington is not evacuated when the second World Trade Center tower is hit and it is clear the US is under attack. (CNN 9/11/2002) Senate Majority Leader Tom Daschle (D-SD) is in the lobby of his office at the Capitol, and some of his staff members there are watching the television coverage of events in New York. Daschle has already been told about the first plane hitting the WTC, and then sees the second one hitting the South Tower live on television. As Daschle later recalls, he now realizes, “This is an attack.” Former Senator John Glenn (D-OH), who has stopped by to say hello to Daschle, now warns him: “I’m not sure you ought to be here. This would be a logical target.” Indeed, Daschle will later comment, “I’ve heard people observe since that day what a prime target the Capitol building makes for such an air attack—this brilliant white structure perched on its own terraced hill, its dome outlined against the sky, with the broad, sprawling expanse of the Mall leading up to it like a long open runway.” (Daschle and D'Orso 2003, pp. 105-107; Daschle 5/10/2004) A bestselling 1994 novel by Tom Clancy in fact included the plotline of a suicide pilot deliberately crashing a Boeing 747 into the Capitol building (see August 17, 1994). (Buckley 10/2/1994; Pinkerton 5/20/2002) Yet Daschle is able to continue with his scheduled weekly team meeting with his senior staff, where they discuss budget issues. (Daschle and D'Orso 2003, pp. 106-107) Even by the time the Pentagon is hit, more than 25 minutes later, there will still have been no evacuation of the Capitol. (CNN 9/11/2002) The building will eventually be evacuated around 9:48 a.m., reportedly due to fears of a plane approaching it (see 9:48 a.m. September 11, 2001). (Associated Press 8/21/2002; Daschle and D'Orso 2003, pp. 109; Hastert 2004, pp. 8)