This page can be viewed at http://www.historycommons.org/entity.jsp?entity=john_hall

John Hall was a participant or observer in the following events: 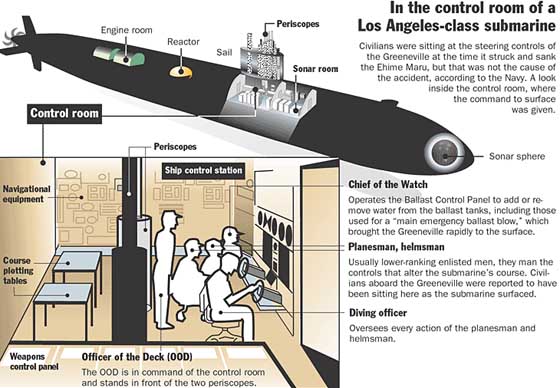 One passenger, Helen Cullen, owns Houston’s Quintana Petroleum and is a heavy donor to the GOP and the Bush campaign; her family has contributed tens of thousands of dollars to the GOP. (Lindsay 2/21/2001)

Three other passengers head the Houston-based Aquila Energy, which has financial ties to the GOP. (Milbank and Allen 3/26/2002)

Another passenger, Mike Mitchell, is the managing director of EnCap Energy Advisors, a Dallas firm with ties to the Bush business family. (Ratcliffe 9/16/2002)

John Hall is a well-known and well-connected Texas oilman who is a major player in a number of multimillion-dollar oil deals, many involving business cronies of the Bush family. And the honorary chairman of the USS Missouri Restoration Fund, the sponsor of the entire contingent of civilians, is former president and Texas oil billionaire George H.W. Bush. (Nakaso 2/18/2001; Baker 2/19/2001)
It is also discovered during the investigation that the Greeneville would not have sailed that day if not for the contingent of what the Navy terms “distinguished visitors” who wanted to take a ride on a submarine. Vice-Admiral John Nathman, who will head the Navy’s board of inquiry, will say of the Greeneville’s voyage, “In my view this doesn’t fit the criteria. It doesn’t come close.…I would never get a carrier underway to support a DV (distinguished-visitor) embark. We’re going to disagree on that.” (Savidge 3/16/2001; Kakesako 3/17/2001) An e-mail sent to the Navy’s public relations office says that the Greenville was slated to play host to “/10 or 12 high-rolling CEOs” finishing a golf tournament. Nathman will call it “Disneyland on a submarine.” (Kakesako 3/17/2001; Associated Press 3/22/2001) Reflecting on the accident two months later, Time Magazine will write, “The sinking of the Ehime Maru resonated around the world. It was the first major foreign policy challenge for the newly installed Bush Administration. In Japan it contributed to the fall from power of Prime Minister Yoshiro Mori, who shocked public opinion by continuing a golf game even after he heard of the accident. The Pentagon fretted about damage to the already fragile military alliance with Japan. The Japanese families of the nine dead were left in shock and grief.” (McCarthy and McCabe 4/15/2001)

A Popular Science article predicts that New Orleans could be completely submerged if hit by a Category 5 hurricane. Scott Kiser, a tropical-cyclone program manager for the National Weather Service, calls New Orleans the one city in the US and possibly the world that would sustain the most catastrophic damage from such a hurricane. He points out that the levees need not fail; a storm surge caused by high winds creating huge waves would quickly drown the city. John Hall of the US Army Corps of Engineers similarly calls the city “the most vulnerable major city to hurricanes.” The article notes that “New Orleans has nearly completed its Hurricane Protection Project, a $740-million plan led by [Al] Naomi [Corps project manager for the New Orleans District] to ring the city with levees that could shield residents from up to Category 3 storm surges.” The Army Corps is considering a new levee system capable of holding back a surge from a Category 5 hurricane, but it “is still in the early planning stages; it may be decades before the new barriers are completed.” (Behar 4/2005)