This page can be viewed at http://www.historycommons.org/entity.jsp?entity=john_hinderaker_1

John Hinderaker was a participant or observer in the following events: 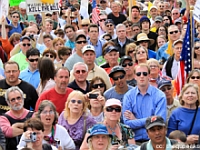 Tea party protesters during a Washington, DC, rally. [Source: TPMDC]In the wake of the NAACP’s condemnation of racist speech being condoned by the various “tea party” groups around the nation (see July 13, 2010), Tea Party Express spokesman Mark Williams, a California radio talk show host, tells NPR that NAACP leaders “make more money off of race than any slave trader ever.” Williams says: “We are dealing with people who are professional race-baiters who make a very good living off this kind of thing. They make more money off of race than any slave trader, ever. It’s time groups like the NAACP went to the trash heap of history where they belong, along with all the other vile, racist groups that emerged in our history.” The national Tea Party Federation cites New York Tea Party activist David Webb as saying: “A false charge of racism is itself, racist. This resolution shows they no longer serve the black community’s interests to advance people of color within American culture. Instead, they exert their power to isolate and control people of color.” Former Governor Sarah Palin (R-AK), a popular supporter of the tea party movement, asks why the NAACP would criticize what she calls “liberty-loving, equality-respecting patriots.” Conservative blogger Michelle Malkin calls the NAACP convention a “grievance-palooza” and a “smear-fest against the tea party.” Another conservative blogger, Power Line’s John Hinderaker, posts, “It is a sad day for a once-respected organization; truthfully, though, it has been a long time since anyone has taken the NAACP seriously.” A St. Louis tea party group calls on the IRS to revoke the NAACP’s tax-exempt status, saying that the resolution proves the organization is nothing more than a political arm of the tea party’s opponents. NAACP media director Eric Wingerter counters: “It’s clear that the far right has been waiting for this battle. We’re ready for it, too.” NAACP president Benjamin Jealous said after his organization released its resolution that the NAACP does not characterize the tea party movement as inherently racist; instead, he says, tea party organizers and leaders do not make enough of an attempt to curb racism in their ranks. “We do not think the tea party is a racist movement,” Jealous said. “Our concern is that it tolerates racism and bigotry by its members.” Many tea party spokespersons tell reporters that their organizations already condemn racism and do not tolerate it during their rallies or on their Web sites, a contention disputed by Jealous, who says: “Do you see the press releases on their Web site? I don’t. What you do behind the scenes is important but it’s not enough if you don’t make it public.… We need the anti-racists in the tea party movement to stand up and be clear that this will not be tolerated.” Jealous goes on to say that Dick Armey, the head of FreedomWorks, a Washington lobbying firm that funds and coordinates many tea party organizations (see April 14, 2009), and other tea party leaders “tolerate bigotry and racism within the ranks,” and allow racist groups to piggyback on the tea party into political legitimacy. Many conservatives counter the NAACP’s position with countercharges that the NAACP and other organizations tolerate and/or support the rhetoric of the New Black Panther movement; Jealous says: “Our message to them is the same thing. They should not tolerate racism and bigotry in their ranks. Move those people out of your organization.” However, Jealous notes, the citations of the New Black Panthers are attempts to change the subject from the overt and repeated acts of racism perpetuated by some tea party members. “The Black Panther party is a flea compared to the tea party dog,” Jealous says. (McMorris-Santoro 7/14/2010; McMorris-Santoro 7/14/2010) In the past, Williams has called President Obama the “racist in chief” (see September 14, 2009) and “our half white, racist president” (see September 2009).