This page can be viewed at http://www.historycommons.org/entity.jsp?entity=john_mark_karr_1

John Mark Karr was a participant or observer in the following events:

September 5, 2006: Conservative Columnist: Wilson May Have Outed His Wife Himself, Compares Wilson to Confessed Pedophile 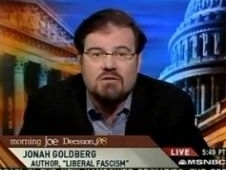 Jonah Goldberg. [Source: MSNBC / MediaBistro (.com)]Conservative columnist Jonah Goldberg, writing for the National Review, compares former ambassador Joseph Wilson (see February 21, 2002-March 4, 2002 and July 6, 2003) to self-proclaimed child murderer John Mark Karr, who falsely confessed to raping and killing six-year-old JonBenét Ramsey. After writing that “Wilson is no more a would-be pedophile than Karr is a former diplomat,” Goldberg calls both men “attention-seeking liars who deliberately helped launch criminal investigations that should never have gone as far as they did” and the beneficiaries of “media feeding frenzies that wasted everybody’s time.” In some ways, Goldberg writes, Wilson is worse than Karr: at least when Karr lied to the press, he attempted to fix the blame for his supposed actions for himself. Wilson, on the other hand, was “a one-man sprinkler system of false accusations” against Bush administration officials such as the “falsely accused” Lewis Libby. Goldberg repeats false claims by Republican members of the Senate Intelligence Committee that Wilson’s discoveries in Niger actually bolstered administration claims of Iraqi attempts to buy Nigerien uranium (see July 9, 2004), and repeats discredited claims that Wilson’s wife, exposed CIA official Valerie Plame Wilson, sent him to Niger (see February 19, 2002, July 22, 2003, October 17, 2003, and July 20, 2005). Goldberg calls Wilson “self-lionizing” and “vengeful,” and goes one step further than most of his fellow conservatives (see September 5, 2006), saying, “Indeed, there’s good reason to believe Wilson himself leaked the information that Plame was an undercover agent.” Goldberg advances no information to back this particular claim. Instead of doing its “rightful” job in challenging Wilson’s allegations from the outset, Goldberg writes, the “mob” of “liberal pundits” at the New York Times and other press outlets went “hog wild” in chasing the possibility of wrongdoing performed by Bush officials such as Libby and Karl Rove. (Goldberg 9/5/2006)