This page can be viewed at http://www.historycommons.org/entity.jsp?entity=john_tierney_1

John Tierney was a participant or observer in the following events:

The General Accounting Office (GAO) reports on an array of problems with the military’s missile defense system (see March 23, 1983 and January 29, 1991). Its report includes an unclassified list of 50 recommendations for improving the system that originated in a public report produced by the Pentagon in 2000. Instead of acting on the recommendations, the Pentagon declares the list of recommendations “retroactively classified,” thereby forbidding Congressional members from discussing the recommendations in public. House members Henry Waxman (D-CA) and John Tierney (D-MA), who requested the GAO report, send an angry letter to Defense Secretary Rumsfeld calling the decision to classify the recommendations “highly dubious” and “an attempt to stymie public debate through the use of the classification system.” Rumsfeld ignores the protest. (Savage 2007, pp. 103-104)

Director of National Intelligence Mike McConnell asks Congress to allow the government to monitor overseas phone calls without warrants. In a letter to the chairman of the House Intelligence Committee, Silvestre Reyes (D-TX), McConnell says that Congress must “act immediately” to change the law, which he says now requires burdensome court orders that hinder the administration’s efforts to combat terrorism. McConnell is advocating a raft of changes in the Foreign Intelligence Surveillance Act (FISA) proposed by the Bush administration; Congress is studying the law pending any possible amendments. McConnell writes that “clarifications are urgently needed” in the law to enable the use of “our capabilities to collect foreign intelligence about foreign targets overseas without requirements imposed by an out-of-date FISA statute,” and says he has “deep concern[s]” about the nation’s ability to counter terrorist threats. At issue are overseas phone calls between two international sources, but which travel through US-based terminals or switches. Peter Hoekstra (R-MI), the ranking Republican on the committee, is also pushing for the changes in FISA, calling the proposals “simple fix[es]” that would expedite the US’s ability to monitor terrorist organizations without adversely affecting US civil liberties. But fellow committee member John Tierney (D-MI) disagrees, saying that FISA “already allows for foreign-to-foreign communications to be intercepted” but that the administration “has chosen to say that it wants a warrant nonetheless.” (Pincus 7/28/2007) 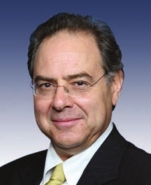 Paul Hodes. [Source: Washington Post]US Representative Paul Hodes (D-NH) asks Congress to investigate how the Pentagon may have improperly influenced so-called “military analysts” to give inaccurate information to the press (see Early 2002 and Beyond). (Associated Press 4/25/2008) In a letter to Representative John Tierney (D-MA), the chairman of the House Oversight and Government Reform Subcommittee on National Security and Foreign Affairs, Hodes asks for hearings on the program as recently revealed by the New York Times (see April 20, 2008). “If these reports are true,” Hodes writes, “it is unacceptable that the Bush administration would attempt to manipulate the public with false propaganda on matters of war and our national security.” He adds: “A hearing also could examine whether some of these analysts were given military contracts with the Defense Department in exchange for reading Bush administration talking points on the public airwaves. The issue at stake here is the public’s right to the truth about our security, our military, and what their government is doing.” (US House of Representatives 4/24/2008) The House will pass an amendment prohibiting the Pentagon from conducting propaganda operations and requiring the General Accounting Office (GAO) to investigate the program (see May 22, 2008).

The Government Accountability Office (GAO) presents its report on weapons accountability problems in Afghanistan to a House Oversight and Government Reform subcommittee. The congressionally ordered audit reveals that the US military did not track hundreds of thousands of weapons—over half of the total procured for the Afghan National Security Forces (ANSF)—between 2004 and 2008. The report expands on an earlier assessment produced by the Pentagon’s Inspector General (see October 24, 2008). The Washington Post quotes subcommittee chairman Rep. John F. Tierney (D-MA) as saying that the failures could lead to American soldiers being killed by insurgents using a weapon purchased by US taxpayers. “That’s what we risk if we were to have tens of thousands of weapons we provided washing around Afghanistan, off the books,” Tierney says in a written statement. (Warrick and Smith 2/12/2009) The audit finds that American military officials did not keep complete records on about 87,000 rifles, pistols, mortars, and other weapons the United States sent to Afghan soldiers and police, nor did they keep reliable records on 135,000 more weapons donated to Afghanistan by 21 countries. The GAO audit also finds:

Inventory controls were lacking for more than a third of the 242,000 light weapons donated to Afghan forces by the United States—a stockpile that includes thousands of AK-47 assault rifles as well as mortars, machine guns, and rocket-propelled grenade launchers.

Until June 2008, the military did not even take the elementary step of recording the serial numbers of some 46,000 weapons the United States provided to the Afghans, making it impossible to track or identify any that might be in the wrong hands. Serial numbers for the 41,000 other weapons from the United States were recorded, but American military officials had no idea where those weapons were.

American trainers were not following their own rules, finding that weapons were issued to Afghans even when there were concerns about—or evidence of—poor security at weapons depots and corruption by Afghan officials.

Afghan security procedures were so inadequate that weapons supplied to Afghan forces were at “serious risk of theft or loss.” Many of the weapons were left in the care of Afghan-run military depots with a history of desertion, theft, and sub-par security systems that sometimes consist of a wooden door and a padlock. (Government Accountability Office 2/12/2009