This page can be viewed at http://www.historycommons.org/entity.jsp?entity=joseph_mccarthy_1

Joseph McCarthy was a participant or observer in the following events:

President Dwight D. Eisenhower, attempting to protect government files from Senator Joe McCarthy (R-WI)‘s anti-Communist “witch hunts” and to prevent government officials from being forced to testify at the Army’s hearings on McCarthy, cites a never-before-used phrase, “executive privilege,” to resist giving over information or allowing aides to testify. While presidents have withheld information from Congress before in narrow and defined circumstances—in 1792, George Washington refused to allow Congress and the courts to obtain information about a disastrous military expedition against Native Americans along the Ohio River, for example—Eisenhower is the first to assert that the executive branch has the right to withhold any internal documents or block officials from giving testimony to other branches or agencies of the government. In 2007, reporter and author Charlie Savage will write that Eisenhower’s actions “creat[ed] a potentially boundless new category of government information a president could deny to Congress.” (Savage 2007, pp. 20; Weiner 6/28/2007)

The Aryan Nations logo. [Source: Southern Poverty Law Center]Aerospace engineer and white racist Richard Butler, who departed California in the early 1970s and moved into a rural farmhouse in Hayden Lake, Idaho, founds and develops one of the nation’s most notorious and violent white separatist groups, the Aryan Nations. Butler’s 20-acre farmhouse becomes the compound for the group and its affiliated church, the Church of Jesus Christ Christian; Butler and his nascent organization envision a “whites-only” “homeland” in the Pacific Northwest. At age 11, Butler read a serialized novel in Liberty Magazine, depicting the takeover of the US by “race-mixing Bolsheviks” that deeply impressed him. As a young man, he worked as an aeronautical engineer in India, where he was fascinated by the Indian caste structure and the concept of racial purity. In 1941 he left a Los Angeles church after concluding that the preacher was spreading Communist doctrine. During World War II, as an Army engineer, he became fascinated by the German military, and later recalls that he “was thrilled to see the movies of the marching Germans.… In those days, all we knew was that Hitler hated communists, and so did my folks—as we did as teenagers.” In the 1950s, Butler was enthralled by radio broadcasts of then-Senator Joseph McCarthy (R-WI) and his “Red scare” accusations, and sent money to support McCarthy’s political campaigns. During that time, Butler met William Potter Gale, another white supremacist who went on to found the Posse Comitatus (see 1969). Butler held a high position in the Christian Defense League, an organization founded by the Reverend Wesley Swift and described by the Southern Poverty Law Center (SPLC) as “virulently anti-Semitic,” until 1965, and shortly thereafter became a mail-order “ordained minister” of Christian Identity, a white supremacist offshoot of the Christian church (see 1960s and After). Butler buys the farmhouse in Hayden Lake and founds his own “Christian Posse Comitatus,” and thereafter founds the Church of Jesus Christ Christian. The two groups merge into what later becomes known as Aryan Nations. (Cooperman 6/2/2003; Southern Poverty Law Center 2010; Southern Poverty Law Center 2010) 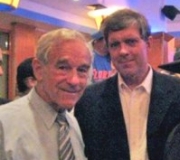