This page can be viewed at http://www.historycommons.org/entity.jsp?entity=joseph_ralston

Positions that Joseph Ralston has held:

Joseph Ralston was a participant or observer in the following events: 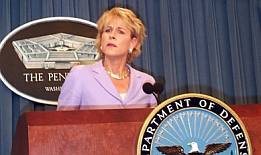 Pentagon chief of public relations Victoria Clarke. [Source: Department of Defense]While detailed plans for the upcoming invasion of Iraq are well underway, the administration realizes that the American people are not strongly behind such an invasion. They aren’t convinced that Saddam Hussein was responsible for the 9/11 attacks, and unsure about Iraq having weapons of mass destruction. White House and Pentagon officials decide that using retired military officers as “independent military analysts” in the national media can help change hearts and minds (see April 20, 2008). Assistant secretary of defense for public affairs Victoria “Torie” Clarke, a former public relations executive, intends to achieve what she calls “information dominance.” The news culture is saturated by “spin” and combating viewpoints; Clarke argues that opinions are most swayed by voices seen as authoritative and completely independent. Clarke has already put together a system within the Pentagon to recruit what she calls “key influentials,” powerful and influential people from all areas who, with the proper coaching, can generate support for Defense Secretary Donald Rumsfeld’s agenda. After 9/11, when each of the news networks rushed to land its own platoon of retired military officers to provide commentary and analysis, Clarke saw an opportunity: such military analysts are the ultimate “key influentials,” having tremendous authority and credibility with average Americans. They often get more airtime than network reporters, Clarke notes. More importantly, they are not just explaining military minutiae, but telling viewers how to interpret events. Best of all, while they are in the news media, they are not creatures of the media. Reporter David Barstow will write in 2008, “They were military men, many of them ideologically in sync with the administration’s neoconservative brain trust, many of them important players in a military industry anticipating large budget increases to pay for an Iraq war.” And even those without such ties tended to support the military and the government. Retired Army general and ABC analyst William Nash will say: “It is very hard for me to criticize the United States Army. It is my life.”
'Writing the Op-Ed' for the War - As a result, according to Clarke’s aide Don Meyer, Clarke decides to make the military analysts the main focus of the public relations push to build a case for invading Iraq. They, not journalists, will “be our primary vehicle to get information out,” Meyer recalls. The military analysts are not handled by the Pentagon’s regular press office, but are lavished with attention and “perks” in a separate office run by another aide to Clarke, Brent Krueger. According to Krueger, the military analysts will, in effect, be “writing the op-ed” for the war.
Working in Tandem with the White House - The Bush administration works closely with Clarke’s team from the outset. White House officials request lists of potential recruits for the team, and suggests names for the lists. Clarke’s team writes summaries of each potential analyst, describing their backgrounds, business and political affiliations, and their opinions on the war. Rumsfeld has the final say on who is on the team: “Rumsfeld ultimately cleared off on all invitees,” Krueger will say. Ultimately, the Pentagon recruits over 75 retired officers, though some only participate briefly or sporadically.
Saturation Coverage on Cable - The largest contingent of analysts is affiliated with Fox News, followed by NBC and CNN, the networks with 24-hour cable news coverage. Many analysts work for ABC and CBS as well. Many also appear on radio news and talk broadcasts, publish op-ed articles in newspapers, and are quoted in press reports, magazine articles, and in Web sites and blogs. Barstow, a New York Times reporter, will note that “[a]t least nine of them have written op-ed articles for The Times.”
Representing the Defense Industry - Many of the analysts have close ties with defense contractors and/or lobbying firms involved in helping contractors win military contracts from the Pentagon:

Retired Army general James Marks, who begins working as an analyst for CNN in 2004 (until his firing three years later—see July 2007) is a senior executive with McNeil Technologies, and helps that firm land military and intelligence contracts from the government.

CBS military analyst Jeffrey McCausland is a lobbyist for Buchanan Ingersoll & Rooney, a major lobbying firm where he is director of a national security team that represents several military contractors. His team proclaims on the firm’s Web site, “We offer clients access to key decision makers.”

Shortly after signing with CBS, retired Air Force general Joseph Ralston became vice chairman of the Cohen Group, a consulting firm headed by former Defense Secretary William Cohen (also an analyst for CNN). The Cohen Group says of itself on its Web site, “The Cohen Group knows that getting to ‘yes’ in the aerospace and defense market—whether in the United States or abroad—requires that companies have a thorough, up-to-date understanding of the thinking of government decision makers.”
Ideological Ties - Many military analysts have political and ideological ties to the Bush administration and its supporters. These include:

Two of NBC’s most familiar analysts, retired generals Barry McCaffrey and Wayne Downing, are on the advisory board of the Committee for the Liberation of Iraq, an advocacy group created with White House encouragement in 2002 to push for the overthrow of Saddam Hussein. (Barstow 4/20/2008) Additionally, McCaffrey is chief of BR McCaffrey Associates, which “provides strategic, analytic, and advocacy consulting services to businesses, non-profits, governments, and international organizations.” (Kurtz 4/21/2008) Other members include senators John McCain (R-AZ) and Joseph Lieberman (D-CT), and prominent neoconservatives Richard Perle and William Kristol. (Cohen 4/28/2008) Both McCaffrey and Downing head their own consulting firms and are board members of major defense contractors.

Retired Army general Paul Vallely, a Fox News analyst from 2001 through 2007, shares with the Bush national security team the belief that the reason the US lost in Vietnam was due to negative media coverage, and the commitment to prevent that happening with the Iraq war. In 1980, Vallely co-wrote a paper accusing the US press of failing to defend the nation from what he called “enemy” propaganda—negative media coverage—during the Vietnam War. “We lost the war—not because we were outfought, but because we were out Psyoped,” he wrote. Vallely advocated something he called “MindWar,” an all-out propaganda campaign by the government to convince US citizens of the need to support a future war effort. Vallely’s “MindWar” would use network TV and radio to “strengthen our national will to victory.” (Barstow 4/20/2008)

Ironically, Clarke herself will eventually leave the Pentagon and become a commentator for ABC News. (Goodman 4/22/2008)
Seducing the Analysts - Analysts describe a “powerfully seductive environment,” in Barstow’s words, created for them in the Pentagon: the uniformed escorts to Rumsfeld’s private conference room, lavish lunches served on the best government china, embossed name cards, “blizzard[s] of PowerPoints, the solicitations of advice and counsel, the appeals to duty and country, the warm thank you notes from the secretary himself.” Former NBC analyst Kenneth Allard, who has taught information warfare at the National Defense University, says: “[Y]ou have no idea. You’re back. They listen to you. They listen to what you say on TV.” Allard calls the entire process “psyops on steroids,” using flattery and proximity to gain the desired influence and effect. “It’s not like it’s, ‘We’ll pay you $500 to get our story out,’” Allard says. “It’s more subtle.”
Keeping Pentagon Connections Hidden - In return, the analysts are instructed not to quote their briefers directly or to mention their contacts with the Pentagon. The idea is always to present a facade of independent thought. One example is the analysts’ almost perfect recitation of Pentagon talking points during a fall and winter 2002 PR campaign (see Fall and Winter 2002). (Barstow 4/20/2008)

February 24, 2002: US General Visits Niger; Finds No Evidence that Uranium Could be Diverted to Iraq

Carlton W. Fulford Jr. [Source: US Marine Corps]Marine General Carlton W. Fulford Jr., deputy commander of the US European Command, arrives in Niger on a scheduled refueling stop. At the request of US Ambassador to Niger Barbro Owens-Kirkpatrick, Fulford joins the ambassador at a meeting with Niger’s President Mamadou Tandja and Foreign Minister Aichatou Mindaoudou. He explains the importance of keeping Niger’s ore deposits secure. At the meeting, President Tandja assures the ambassador and General Fulford that Niger is determined to keep its uranium “in safe hands.” (Priest and Milbank 7/15/2003; Belida 7/15/2003; Burrough et al. 5/2004, pp. 282; US Congress 7/7/2004) After the meeting, Fulford concludes that Niger’s uranium is securely under the control of a French consortium and that there is little risk that the material will end up in the wrong hands. These findings are passed on to General Joseph Ralston who provides them to General Richard B. Myers, chairman of the Joint Chiefs of Staff. (Priest and Milbank 7/15/2003; Belida 7/15/2003; Burrough et al. 5/2004, pp. 282) The Pentagon will later say that Defense Secretary Donald Rumsfeld was not informed about the trip or its conclusions. (Belida 7/15/2003)