This page can be viewed at http://www.historycommons.org/entity.jsp?entity=karen_hanretty_1

Karen Hanretty was a participant or observer in the following events: 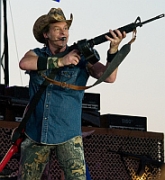 Rock musician Ted Nugent, brandishing an assault rifle on stage in this undated photo. It is not clear whether the rifle is real. [Source: NIN (.com)]During a concert, rock musician Ted Nugent brandishes what appears to be an assault rifle on stage and makes crude and profane comments about Senators Barack Obama (D-IL) and Hillary Clinton (D-NY), the two leading contenders for the Democratic presidential nomination.
Invitations to 'Suck on My Machine Gun' - In a video clip of the incident, Nugent waves the rifle around and shouts: “I was in Chicago. I said, ‘Hey, Obama, you might want to suck on one of these, you punk!’ Obama, he’s a piece of sh_t. I told him to suck on my machine gun. Let’s hear it for it. And I was in New York. I said, ‘Hey, Hillary, you might want to ride one of these into the sunset, you worthless b_tch!” He also invites Senator Barbara Boxer (D-CA) to “suck on my machine gun” and calls Senator Dianne Feinstein (D-CA) a “worthless wh_re.” Nugent, an enthusiastic Republican, has been a member of the National Rifle Association’s board of directors since 1995, and has frequently issued crude and profane criticisms of Democratic candidates and policies.
Fox Host Refuses to Criticize Nugent, Instead Attacks Obama - Three days later, Fox News host Sean Hannity airs a clip of the incident on his show, and, calling Nugent a “friend and frequent guest on the program,” refuses to criticize his statements. Hannity shows the clip, then says: “That was friend and frequent guest on the program Ted Nugent expressing his feelings towards Democratic presidential contenders Barack Obama and Hillary Rodham Clinton. Joining us now, Democratic strategist Bob Beckel and Republican strategist Karen Hanretty.” Hannity asks Beckel why liberals might be upset at Nugent’s rhetoric but, he says, “I don’t hear anybody criticizing Barack Obama for accusing our troops of killing civilians, air-raiding villages, et cetera, et cetera. What’s more shocking to you? What’s more offensive to you? Is it Barack Obama’s statement about our troops or Ted Nugent?” (Hannity is referring to a recent allegation he made that Obama was lying about US troops killing Afghan civilians; Hannity’s allegation was itself false—see August 21, 2007). Beckel responds: “You know, only you could figure out a way to ask a question like that. First of all, Nugent, this is a boy who’s missing a couple dogs from under his front porch. This guy has been pimping for Republicans for years now. They want him to run for Senate against Obama. I can’t believe—when the Dixie Chicks said something about George Bush, which was mild compared to this jerk, and the religious right, the Dobsons and the Robertsons, rose up in fury. You rose up in fury.” (Beckel is referring to complaints from Hannity and other conservatives that followed comments by the lead singer of the country group the Dixie Chicks that criticized President Bush—see March 10, 2003 and After.) Hannity says: “You know, typical Bob Beckel. But you can’t answer the question. I didn’t ask you that.” After a brief period of crosstalk, Beckel asks, “Are you prepared now, Sean—are you prepared to disavow this lowlife or not?” Hannity refuses, saying: “No, I like Ted Nugent. He’s a friend of mine.… [H]e’s a rock star. Yes, here’s my point. If you don’t like it, don’t go to the concert, don’t buy his new albums.” Instead, Hannity asks if Beckel’s “liberal brain can absorb” his question about Obama’s supposed lies regarding Afghanistan, and Beckel responds: “The question is not even a close call. I think Nugent was far over the line and Obama was not.… This Nugent is more offensive. This guy ought to be knocked off the air. He ought to never come on your show again, and if you have him on, you ought to be ashamed of yourself. He’s a bum!”
Hannity Has Criticized 'Hate Speech' Directed at Conservatives - Hannity apparently has different standards for different people. He has accused Clinton of indulging in “hate speech” when she talked about the existence of what she called a “vast right-wing conspiracy.” In March, he devoted an entire segment to a “list of the worst examples of liberal hate speech.” (Roberts 8/24/2007; Media Matters 8/27/2007)