This page can be viewed at http://www.historycommons.org/entity.jsp?entity=karim_said_atmani_1

Karim Said Atmani was a participant or observer in the following events: 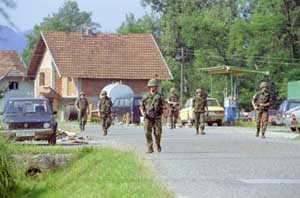 NATO troops patrol the village of Bocinja Donja in 2001. [Source: NATO / Paul Hanson]In the wake of the failed al-Qaeda millennium bomb plots, US investigators will discover that a number of suspects in the plots have connections to an obscure village in Bosnia named Bocinja Donja. At the end of the Bosnian war in late 1995, Bosnian President Alija Izetbegovic kicked out the Serbians living in this small village 60 miles north of the capital of Sarajevo and gave their houses to about 100 former mujaheddin who fought in Bosnia. Most of them married local women, allowing them to stay despite a treaty requiring all foreign fighters to leave Bosnia. In contrast to the rest of Bosnia, the village is governed by strict Islamic law. Suspects who lived in or visited the village include:

Karim Said Atmani. A former roommate of Ahmed Ressam, he is believed to be the document forger for Ressam’s group that attempted to bomb the Los Angeles airport (see December 14, 1999). He was a frequent visitor to Bosnia until late 1999. (Smith 3/11/2000)

Khalil Deek. Suspected of masterminding the Los Angeles airport plot (see December 15-31, 1999) and a Jordanian millennium plot (see December 11, 1999), Deek was investigated by US intelligence since the late 1980s (see Late 1980s) but inexplicably never even watchlisted until 2004 (see Spring 2004). Deek’s brother says Khalil lived in Bosnia for a while, working for a “Muslim relief organization.” (Smith 3/11/2000; Schou 6/15/2006) He worked for the IARA, which reportedly funneled weapons and recruits into Bosnia (see Early 1990s).

Hisham Diab. While he has not been explicitly connected to this village, he fought in Bosnia and was Deek’s next door neighbor and close al-Qaeda associate all through the 1990s (see March 1993-1996 and December 14-25, 1999), so presumably they spent time in Bosnia together. (Khatchadourian 1/22/2007)

Hamid Aich. He lived in Canada and is connected to Ressam’s group (see December 21, 1999). He also will openly live in Ireland and apparently fund a wide variety of militant groups and plots there before escaping to Afghanistan just before 9/11 (see June 3, 2001-July 24, 2001).
Other mujaheddin connected to this village are wanted by authorities in other countries for other alleged crimes. A senior US official will say, “We have been concerned about this community for years. We flushed out a lot of them [after the end of the war].… [But] we find the whole group of them a threat, and we want them out of there.” (Smith 3/11/2000) Others tied to the millennium plots have ties to Bosnian war generally because Ressam belonged to a group of armed robbers called the “Roubaix gang” that trained in Islamic camps in Bosnia. (Dahlburg 1/13/2000) Izetbegovic will step down as leader of Muslim Bosnia in October 2000. (Binder 10/20/2003) In late 2000 and early 2001, the mujaheddin will gradually be moved out of the village and replaced by the original Serbian inhabitants.