This page can be viewed at http://www.historycommons.org/entity.jsp?entity=kate_phillips_1

Kate Phillips was a participant or observer in the following events: 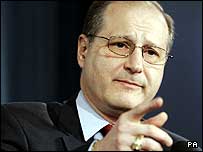 Eric Edelman. [Source: BBC]Seven weeks after Senator Hillary Clinton (D-NY) sent a letter to Defense Secretary Robert Gates calling for Congressional briefings on Pentagon plans to withdraw troops from Iraq or explanations as to why those plans do not exist (see May 23, 2007), Undersecretary of Defense Eric Edelman responds to Clinton in a letter of his own. After giving a brief overview of the current military and political situation in Iraq, Edelman says: “Premature and public discussion of the withdrawal of US forces from Iraq reinforces enemy propaganda that the United States will abandon its allies in Iraq, much as we are perceived to have done in Vietnam, Lebanon and Somalia.…[S]uch talk understandably unnerves the very same Iraqi allies we are asking to assume enormous personal risks.” (US Department of Defense 7/16/2007

) Some observers are surprised by Edelman’s language as Clinton is not only a senator, but a member of the Armed Services Committee. The New York Times’s Kate Phillips terms the letter “a stunning rocket.” (Phillips 7/19/2007) The letter also directly contradicts Gates, who said earlier that the Senate debate on withdrawing from Iraq was “helpful in bringing pressure” on the Iraqi government to work towards peace and unity (see March 30, 2007).
'Impugning the Patriotism of Any of Us Who Raise Questions' - Clinton fires back four days later, accusing Edelman of dodging her questions. Instead, she says, Edelman “made spurious arguments to avoid addressing contingency planning.… Undersecretary Edelman has his priorities backward.” (USA Today 7/20/2007) Edelman, Clinton says, is “impugning the patriotism of any of us who raise serious questions.” (Dorr 8/6/2007) Clinton spokesman Philippe Reines says, “We sent a serious letter to the secretary of defense, and unacceptably got a political response back.” Clinton again asks for a briefing on end-of-war planning, classified if necessary. Edelman does imply that the Pentagon is formulating such plans in his letter, but says that the Pentagon will not divulge any such planned operations. (USA Today 7/20/2007)
Democrats Defend Clinton - Fellow Democratic senator John Kerry joins in criticizing Edelman’s response. “This administration reminds us every day that they will say anything, do anything, and twist any truth to avoid accountability,” Kerry says in a statement. (US Senate 7/19/2007) Clinton’s husband, former president Bill Clinton, calls Edelman “one of the more ideological holdovers” in the Defense Department from President Bush’s first term in office. Edelman, who replaced Douglas Feith in the Pentagon, is a former national security adviser to Vice President Dick Cheney. (Think Progress 7/22/2007)
Conservatives Weigh In - On the other side, conservative blogger and Fox News pundit Michelle Malkin asks rhetorically, “Wasn’t this a case of Hillary putting on her little imaginary four stars on her sleeve and playing armchair general?” (Media Matters 7/23/2007) But an Army Times writer, Air Force veteran Robert Dorr, calls Edelman’s letter “disrespectful” and writes: “No matter what you think of the war or of Clinton, Edelman’s response was unusually harsh. Senators hold their jobs because people voted for them. Appointees such as Edelman, who weren’t elected by anyone (and in the case of Edelman, received a recess appointment and wasn’t confirmed by the Senate), should be responsive to lawmakers’ concerns.” (Dorr 8/6/2007)