This page can be viewed at http://www.historycommons.org/entity.jsp?entity=kim_dae_jung_1

Kim Dae Jung was a participant or observer in the following events: 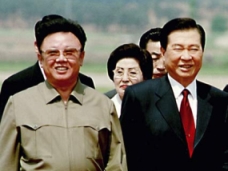 Kim Jong Il and Kim Dae Jung. [Source: Encyclopedia Brittanica]President Bush meets with South Korean president Kim Dae Jung (known in the administration as KDJ), and pointedly snubs Kim in an official press conference, announcing that he has no intention of following the Clinton policy of engaging North Korea in any sort of dialogue regarding North Korea’s nuclear buildup. Kim has attempted to implement a “sunshine” policy of open negotiations with the North, including economic trade and nuclear talks, but his efforts are predicated on US support. Secretary of State Colin Powell advocates working with Kim to further implement negotiations with North Korea, but loses out (see March 7, 2001) to pressure from Vice President Dick Cheney, Defense Secretary Donald Rumsfeld, and Rumsfeld’s deputy, Paul Wolfowitz, who believe Clinton had been doing little more than appeasing a tyrant in negotiating with North Korea’s Kim Jong Il. Bush misstates the facts in the conference, saying that “we’re not certain as to whether or not they’re keeping all terms of all agreements,” when there has only been a single agreement between the US and North Korea, the 1994 agreement to freeze North Korea’s plutonium processing (see October 21, 1994). Treasury Secretary Paul O’Neill believes that the gaffe is due to Bush’s lack of understanding of the complex situation between the US, North Korea, and the US’s allies in Southeast Asia, and Bush’s failure to “do his homework” before Kim’s arrival in Washington. O’Neill attempts to salvage the situation by lauding South Korea’s superb literacy rate among its citizens, earning a look of surprise from Bush. O’Neill privately mulls over the decision-making process in the White House, with Bush damaging ten years of “delicately stitched US policy towards North Korea” in just a few minutes. (Suskind 2004, pp. 114-115) In 2004, foreign affairs reporter Fred Kaplan will offer an explanation of Bush’s behavior. To negotiate with an “evil regime” such as North Korea’s is, in Bush’s view, “to recognize that regime, legitimize it, and—if the negotiations led to a treaty or a trade—prolong it.” Bush has already told one reporter that he “loathed” Kim Jong Il. He distrusts anyone such as KDJ who has any intention of accomodating or even negotiating with such a regime. Additionally, Bush views the South Korean leader—a democratic activist who had spent years in prison for his beliefs—with what Kaplan calls “startling contempt.” Charles “Jack” Pritchard, who had been director of the National Security Council’s Asia desk under Clinton and is now the State Department’s special North Korean envoy under Bush, will later recall, “Bush’s attitude toward KDJ was, ‘Who is this naive, old guy?’” Bush and his advisers, particularly Rumsfeld and Cheney, hope not only to isolate North Korea, but to undermine Kim Dae Jung’s regime in hopes to shake his administration and drive South Koreans to elect a conservative in the next elections. (Kaplan 5/2004)

While President Bush is meeting with South Korean President Kim Dae Jung (see March 7, 2001), Secretary of State Colin Powell meets with reporters for an unusual public self-abasement. Powell admits that he misspoke the day before when he said that the US would resume negotiations between itself and North Korea (see October 2000 and Mid-January 2001). “There was some suggestion that imminent negotiations are about to begin,” Powell says. “I got a little too far forward on my skis.” (Scoblic 2008, pp. 237) 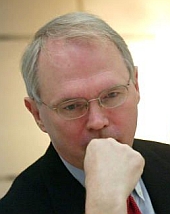 Jim Kelly. [Source: ViewImages.com]Undersecretary of State Jim Kelly, slated to try to revive the US’s attempts to negotiate with North Korea over that nation’s nuclear weapons program, goes to South Korea in preparation for President Bush to visit Seoul. Kelly is fully aware that the Bush administration has gone out of its way to undermine and disrupt the Clinton-era negotiations with North Korea, and a year before had insulted then-President Kim Dae Jung over the issue (see March 7, 2001). Now South Korea has a new president, Roh Moo Hyun, a populist with the same intentions of reopening a dialogue with North Korea as his predecessor. Charles Pritchard, the Bush administration’s special North Korean envoy, accompanies Kelly on the visit, and later recalls: “The conversation in the streets of Seoul was, ‘Is there going to be a war? What will these crazy Americans do?’” When Kelly and Pritchard meet with Roh, the president tells them, “I wake up in a sweat every morning, wondering if Bush has done something unilaterally to affect the [Korean] peninsula.” Bush’s visit to South Korea does little to ease tensions or convince North Korea to consider abandoning its uranium enrichment program (see October 4, 2002). (Kaplan 5/2004)