This page can be viewed at http://www.historycommons.org/entity.jsp?entity=kyle_jones_1

Kyle Jones was a participant or observer in the following events: 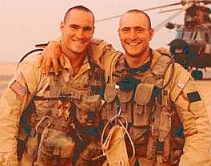 Kevin and Pat Tillman. [Source: IraqHeroes (.com)]The Tillman brothers (see May 23-June 1, 2002) ride in separate convoys to complete a mission, Pat Tillman in designated Serial One and Kevin Tillman in Serial Two; while One moves safely through a dangerous canyon, Two, following shortly behind, runs into an ambush ( see April 22, 2004 and 6:14 p.m.-6:34 p.m. April 22, 2004).
Trapped in 'Kill Zone' - Serial Two—in the canyon only a minute—hears an explosion. Thinking they have hit a land mine or that an IED has been detonated, Sergeant Greg Baker and his men follow Standard Operating Procedure (SOP) and dismount their “machine gun-laden” vehicle. Baker, in command of that vehicle, will later testify that he “noticed rocks falling,” and “then… saw the second and third mortar rounds hit.” He also will say that he could hear the “rattle of enemy small arms fire.” Now, realizing they are in an ambush, Two tries to get out of the “kill zone,” but the tow truck, which has been at the head of the convoy, blocks the way, its driver “cowering behind rocks.” Baker grabs the driver, throws him back in the truck, and gets him to move out, while he unloads his weapon “up the canyon walls” until it is out of ammunition. He dismounts the tow truck, racing back to his own vehicle—a roofless Humvee open on all sides—reloads, and continues firing. (Coll 12/5/2004; Krakauer 2009, pp. 264)
Serial Two 'Trigger-Happy' - Ranger Corporal Jason Parsons, a Serial Two member, will describe a scene of “tunnel vision” and “panic,” as his “trigger-happy crew”—men in the convoy’s last vehicle—fire at dark shapes they perceive above, to their north. Both Black Sheep soldiers, Pedro Arreola and Kyle Jones, shoot multiple rounds at this area, the northern ridge line. Kevin Tillman, riding atop Parson’s Humvee, holds his fire, fearing a ricochet effect will land his ordinance on a fellow Ranger’s head, but when he does finally see an opportunity to get off a shot, he finds his Mark 19 machine gun jammed, perhaps due to all the jostling, and he cannot get off a grenade during the entire incident. (Krakauer 2009, pp. 250-276)