This page can be viewed at http://www.historycommons.org/entity.jsp?entity=lance_morrow_1

Lance Morrow was a participant or observer in the following events: 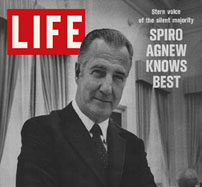 Life Magazine cover featuring Agnew. [Source: Southern Methodist University]Vice President Spiro Agnew, fresh from helping Richard Nixon win the 1968 election by viciously attacking their Democratic opponents, wins a reputation as a tough-talking, intensely negative public presence in Washington. Much of Agnew’s tirades are crafted by White House speechwriters Pat Buchanan and William Safire. In 1969, Agnew derides antiwar protesters, saying, “A spirit of national masochism prevails, encouraged by an effete corps of impudent snobs who characterize themselves as intellectuals.” (Morrow 9/30/1996) Student war protesters “have never done a productive thing in their lives,” and, “They take their tactics from Fidel Castro and their money from daddy.” (Suder 10/11/1998) In 1970, he attacks the American media and critics of the Nixon administration alike, telling a San Diego audience that “we have more than our share of the nattering nabobs of negativism.” Agnew attacks enemies of the administration as “pusillanimous pussyfooters,” “vicars of vacillation,” and “the hopeless, hysterical hypochondriacs of history.” Democrats are “radic-libs” and “ideological eunuchs.” In Des Moines, reading a speech written by Buchanan, Agnew slams the US media industry, saying it is dominated by a “tiny and closed fraternity of privileged men, elected by no one.” Agnew’s unrelenting attacks on the press raise, reporter Lance Morrow writes in 1996, “issues of media bias, arrogance and unaccountability that are still banging around in the American mind.” Agnew is undone by his own negativity, earning a barrage of critical press coverage for, among other things, calling an Asian-American reporter a “fat Jap,” referring to a group of Polish-Americans as “Polacks,” and dismissing the plight of America’s poor by saying, “To some extent, if you’ve seen one city slum, you’ve seen them all.” Many political observers feel that Agnew’s heated rhetoric is the precursor to the wave of personal, negative attack politics practiced by the GOP in the decades to come. (Clines 9/19/1996; Morrow 9/30/1996) Interestingly, while many Americans celebrate Agnew’s rhetoric, few want him as a successor to the presidency. One Baltimore bar patron says, “I don’t want the president of the United States to sound like I do after I’ve had a few beers.” (Economist 9/28/1996)