This page can be viewed at http://www.historycommons.org/entity.jsp?entity=larry_mcdonald_1

Larry McDonald was a participant or observer in the following events: 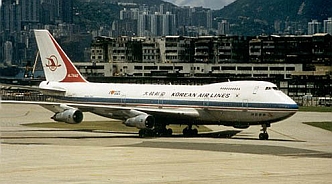 Korean Airlines Flight 007 before takeoff. [Source: Check-Six (.org)]A Soviet Su-15 fighter plane fires two missiles into a Korean Airlines 747 passenger plane, KAL 007. The plane, en route from Alaska to Seoul, South Korea, had strayed into Soviet air space, had not responded to radio communications, and had either ignored or not seen warning shots fired at it. The 747 crashes into the Sea of Japan, killing all 269 passengers, including conservative House Representative Larry McDonald (D-GA) and 62 other Americans. The Soviets insist that the passenger plane was deliberately sent into their airspace to test their military readiness; later investigation shows that a US spy plane had just left the area, agitating Soviet radar units, and, according to their own radio transmissions, the Soviets had honestly believed the 747 was another spy plane, most likely an American RC-135. Though it has definitely strayed into Soviet airspace at least twice, and flown over a sensitive Soviet airbase on the Kamchatka Peninsula, it is most likely shot down in international airspace. (Fischer 3/19/2007; Scoblic 2008, pp. 131)
Angry White House Officials Respond - Reagan administration officials are furious. Secretary of State George Shultz, dubbed “The Sphinx” by journalists for his remote demeanor, rails at the Soviets in a press conference called just four hours after the White House learns of the incident. (Scoblic 2008, pp. 131) Four days later, Reagan will denounce the Soviets in a primetime televised speech (see September 5, 1983).
Massive PR Campaign against USSR - The US will use the shootdown to mount a tremendous public relations campaign against the Soviets, focusing on the Soviet civilian leadership as well as Soviet international business interests; for example, the US will demand a global boycott of the Soviet airline Aeroflot. According to a memo issued to the Politburo by the Defense Ministry and the KGB, the Soviets well understood the political ramifications of the shootdown: “We are dealing with a major, dual-purpose political provocation carefully organized by the US special services. The first purpose was to use the incursion of the intruder aircraft into Soviet airspace to create a favorable situation for the gathering of defense data on our air defense system in the Far East, involving the most diverse systems including the Ferret satellite. Second, they envisaged, if this flight were terminated by us, [the US would use] that fact to mount a global anti-Soviet campaign to discredit the Soviet Union.” In its own counter-propaganda efforts, Soviet leader Yuri Andropov will say that an “outrageous military psychosis” has taken over US foreign policy. He adds, “[T]he Reagan administration, in its imperial ambitions, goes so far that one begins to doubt whether Washington has any brakes at all preventing it from crossing the point at which any sober-minded person must stop.” (Fischer 3/19/2007)
Exacerbating Tensions - After the shootdown and its aftermath, according to the Soviet ambassador to the US, Anatoly Dobrynin, both sides go “a little crazy.” The shootdown gives the US hard evidence of its worst-case assumptions about the Soviets. For the Soviets, the US reaction gives them hard evidence of their own assumptions about the US’s attempts to provoke the USSR into some sort of confrontation (see 1981-1983) and to embarrass the Soviet Union in the eyes of the world. Reagan’s use of the KAL 007 incident to ask Congress for more defense funding is, in the Soviets’ eyes, proof that the entire incident was engineered by the Americans for just such an outcome. (Fischer 3/19/2007)
Alternative Accounts - A number of alternative accounts about the incident spring up, in particular concerning McDonald. (Maier 4/16/2001)