This page can be viewed at http://www.historycommons.org/entity.jsp?entity=lavada_quinzetta_harris_1

Lavada Quinzetta Harris was a participant or observer in the following events: 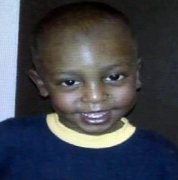 Jadon Higganbothan before his murder. [Source: WRAL-TV]A four-year-old boy and a 28-year-old woman are killed, apparently through their contact with a small North Carolina religious cult. Peter Lucas Moses, the head of a “family” made up of four women and nine children, is charged with first-degree murder in the deaths of four-year-old Jadon Higganbothan and 28-year-old Antoinetta Yvonne McKoy; prosecutors say they will seek the death penalty. Group members, all women and children, call Moses “Lord” and reportedly fear him. Prosecutors say Moses killed Higganbothan because he believed the child “act[s] gay,” and McKoy because she found out she could not bear children and wanted to leave the group’s home in Durham, North Carolina. In February 2011, a woman escapes from the group’s home and contacts police. Her identity is not made public. She lived at the home with Moses, Higganbothan, McKoy, and three other women also charged in the slayings: Higganbothan’s mother, Vania Rae Sisk, 25, Lavada Quinzetta Harris, 40, and Larhonda Renee Smith, 40. Sisk, Lavada Harris, and Smith face first-degree murder charges in McKoy’s death and charges as accessories in Higganbothan’s death. Investigators believe some of those involved in the deaths are members of a religious sect known as the Black Hebrews, which claims it descends directly from the ancient tribes of Israel. The unnamed woman informs police that two people were killed in the house. Court records show that police had a confidential informant in the case. The women call themselves “wives or common-law wives” of Moses, according to Durham County District Attorney Tracey Cline. “The arrangement was the women would periodically occupy the master suite with” Moses. Cline refuses to call the group a cult. Moses is the father of all the children except for Higganbothan; according to prosecutors, Moses feared that Higganbothan might be gay because his father had left Sisk, and Moses told her to “get rid” of the child. “In the religious belief of that organization, homosexuality was frowned on,” Cline says. In October 2010, Moses becomes incensed after learning that Higganbothan had struck another child in the rear, begins screaming, “I told you to get rid of him!” begins playing loud music, takes Higganbothan into the garage, and shoots him in the head. The women put the child’s body into a suitcase and place the suitcase in Moses’s master suite; he later orders the women to remove the suitcase because it is beginning to smell. On December 21 or 22, prosecutors will say, McKoy is also murdered by Moses. She attempts to go to a neighbor’s house and call her mother in Washington, DC, but Moses drags her back to their home and beats her throughout the day, sometimes joined by some of the other women. He then attempts to strangle her with an extension cord, and finally takes her into the bathroom and shoots her to death. The neighbor will later say she did not call police because she thought that it was a group home and that McKoy might be mentally disturbed. Prosecutors find diary entries written by McKoy begging “Lord” not to kill her. The group throws a party later in the week, and Moses displays McKoy’s corpse to several of his relatives, including his mother, brother, and sister, who are later charged as accessories in McKoy’s death. McKoy’s body is stored in a black plastic garbage bag. Eventually “family” members bury both bodies in the back yard of a house that was Moses’s mother’s former residence. Plumbers find the body in June 2011. Prosecutors find shell casings and blood in the garage and master bedroom of Moses’s house. They also find a .22-caliber gun matching the shells found in the house on the roof of a Colorado townhouse, where the “family” moves in February 2011. The other eight children, who say they feared Moses would do to them “what he did to Jadon,” according to Cline, are taken into foster care. McKoy’s mother, Yvonne McKoy, says she is still numb and cannot believe her daughter is gone. “I’m just grateful to God that justice has been served and God is going to do what God is going to do,” she says. (WRAL-TV 7/8/2011; Associated Press 7/8/2011)