This page can be viewed at http://www.historycommons.org/entity.jsp?entity=liberation_collective_1

Liberation Collective was a participant or observer in the following events: 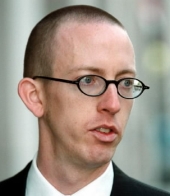 A 2000 photo of Craig Rosebraugh. [Source: Doug Beghtel / The Oregonian]Earth Liberation Front (ELF—see 1997) activist Craig Rosebraugh, a Portland, Oregon, native who has long been involved in the animal rights movement as well as opposing the Gulf War, joins another activist, Leslie James Pickering, in forming the Liberation Collective in Portland. Rosebraugh says he believes that “animal rights issues, environmental issues, social justice, are all related,” and his collective is a way to bring together a variety of independently operating organizations, tied together, he says, “by our main ideological structure in the country, which we continue to operate under, and in my view that is capitalism.” Rosebraugh successfully infuses some of the various movements, particularly ELF, with a strong anti-capitalist and anti-government ideology. Rosebraugh becomes ELF’s public spokesman in late 1997, and coordinates ELF efforts with its sister organization, the Animal Liberation Front (ALF—see 1976). (Anti-Defamation League 2005)

The New York Times prints a lengthy interview with Craig Rosebraugh, who serves as an unofficial spokesman for the Earth Liberation Front (ELF—see 1997). Rosebraugh, who claims to sympathize with the group even though knowing little about it, has spent weeks sending out statements and press releases on behalf of the ELF after the recent firebombing of a Vail, Colorado, ski resort (see October 19, 1998). Rosebraugh, who was contacted by unidentified ELF members about the Vail fires, says the ELF takes credit for the incident, and defends it by saying the resort has caused extensive damage to the area’s lynx habitats and a planned expansion would all but destroy those habitats. “They don’t want this to be seen like an act of terrorism,” he recently told a reporter on behalf of ELF. “They instead want this to be seen as an act of love for the environment.” The firebombing was not an instance of so-called “ecoterrorism,” he told another reporter: “To me, Vail expanding into lynx habitat is ecoterrorism.” Many mainstream groups such as the Sierra Club and Defenders of Wildlife have condemned the Vail firebombing; Jonathan Staufer of the Colorado group Ancient Forest Rescue, who has been working to stop the Vail resort’s proposed expansion, says: “It marginalized all the enviromentalists in Colorado who have been fighting it. I can’t condemn it more completely.” Rosebraugh became active in extreme environmental movements in June 1997, when he was contacted by the Animal Liberation Front (ALF—see 1976) and asked to be its “aboveground” spokesperson. Since then, he has formed a group called the Liberation Collective, which he says is intended to bring the ELF, ALF, and other “direct action” groups together to make common cause (see 1996 and After). Lieutenant Jeff Howard of the Oregon State Police says of the two groups, “If the truth be known, there are members that are probably members of both groups.” Because of the decentralized, “cell” structure of both ELF and ALF, federal investigators have had difficulty determining even the most basic facts about the two organizations. Recently, Rosebraugh said of the federal investigations into ELF, ALF, and the Vail firebombing: “This is a very hot topic not only for the media, but most important it’s a hot topic for the FBI and government agencies. The FBI just had a big meeting on animal rights terrorism. So there’s obviously going to be a big crackdown soon. It’s hard to imagine what’s going to happen but you can only look at history, and history shows that there is going to be a lot of pressure and my feeling is the best way to act is to resist.” (Sullivan 12/20/1998)

Activists with the underground environmental group Earth Liberation Front (ELF—see 1997) set fire to the Oregon offices of the Boise Cascade Corporation, a paper manufacturer. A statement from ELF activists says the group started the fire with four buckets of diesel fuel and a kitchen timer. Boise Cascade has “ravaged the forests of the Pacific Northwest,” the group claims. The ELF statement comes with a similar statement from the Liberation Collective, which brings together environmental and animal rights activist groups under a common rubric. Liberation Collective spokesman Craig Rosebraugh (see December 20, 1998) says he receives “anonymous communications” from ELF and other groups. “I just pass that information along to the press and public,” he says. The Liberation Collective describes ELF as “an underground environmental organization that uses economic sabotage to end the exploitation and destruction of the natural environment and its inhabitants.” Because ELF, which is classified as a domestic terrorism organization, has taken credit for the blaze, the FBI will head up the investigation. (New York Times 12/31/1999)