This page can be viewed at http://www.historycommons.org/entity.jsp?entity=libya_1

Libya was a participant or observer in the following events: 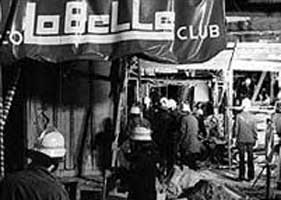 The La Belle disco in Berlin after it was bombed. [Source: AFP]European public opinion begins to turn after the US launches a deadly strike against Libya, in retaliation for the bombing of a Berlin disco in which two American servicemen died (see April 5, 1986 and After). The CIA therefore works to spread the idea that the Libyans intend to plant another bomb in Berlin, a propaganda operation designed to reshape European public opinion. According to a CIA officer involved in the operation, the first step is “to convince German intelligence and police there was a terrorist cell.” To achieve this, a Lebanese CIA asset named Jamal Hamdan, who helps the US in various ways around this time, makes a series of phone calls from an apartment in Cyprus to suspected terrorists in Germany. Hamdan also tells a relative living in West Berlin that his brother Ali and a friend will enter the city carrying a package, which, it is implied, is a bomb. Ali Hamdan and the friend then enter West Berlin illegally from the east and are arrested by German police, who wrongly believe that they actually have a bomb and the plot is real. Word of the plot is leaked to the US press, enabling the Reagan administration to quell criticism of the attack on Libya. The CIA then steps in and has the two men held in Germany released. (Trento and Trento 2006, pp. 89-90)

Between November 2005 and September 2006: Al-Qaeda Leader Al-Libi Secretly Transferred to Libya to Avoid Questions about Torture and False Confessions

Some time between when al-Qaeda leader Ibn al-Shaykh al-Libi is moved to a prison in Mauritania in November 2005 (see November 2005) and September 2006 when most imprisoned al-Qaeda leaders are transferred to Guantanamo (see September 2-3, 2006), al-Libi disappears from known US custody. Al-Libi was captured in late 2001 and confessed that the Iraqi government helped train al-Qaeda in chemical and biological weapons (see January 2002 and After). In 2004, he recanted his confession amid allegations that he was brutally tortured, and the CIA later determined his Iraq allegations were untrue (see February 14, 2004). In May 2007, a group of Democratic Congresspeople will write President Bush, asking if al-Libi was tortured and/or renditioned to Egypt to be tortured, and also asking, “Where is al-Libi today?” Human-rights groups and others suspect the Bush administration is hiding al-Libi and concealing key information about him because of the potential political and legal ramifications about his torture, as well as his false confession that helped lead to war with Iraq. While the White House has yet to respond to queries about al-Libi, Newsweek will later claim that al-Libi, a Libyan, has been quietly returned to Libya and is being secretly imprisoned there. He is reportedly extremely ill with tuberculosis and diabetes. It is said the Libyan government has kept silent about holding al-Libi as a favor to the Bush administration, to help avoid more public scrutiny about him. (Isikoff 5/29/2007)

In his first speech to the General Assembly at United Nations headquarters, President Obama says all nations bear responsibility for addressing the global problems of nuclear proliferation, war, climate change, and economic crises. “We must build new coalitions that bridge old divides,” Obama says. “All nations have rights and responsibilities—that’s the bargain that makes [the UN] work.” Obama acknowledges that high expectations accompanying his presidency are “not about me,” adding that when he took office at the beginning of the year: “Many around the world had come to view America with skepticism and mistrust. No world order which elevates one nation above others can succeed in tackling the world’s problems. Those who used to chastise America for acting alone in the world cannot now stand by and wait for America to solve the world’s problems alone.” Obama devotes a considerable portion of his speech to discussing the challenges inherent in finding a peaceful solution to settlements in the Middle East. He calls for the resumption of Israel-Palestine negotiations “without preconditions,” and also uses his speech to indicate that the US has returned to the global arena as a team player.
Warm but Restrained Reception - Although warmly received, applause appears slightly restrained, perhaps an indication that expectations for the Obama presidency are becoming more realistic, given the global problems with which most nations now struggle. UN Secretary General Ban Ki-moon opens the 64th Session’s proceedings by saying, “Now is the time to put ‘united’ back into the United Nations.”
Followed by Libyan Leader - Libya’s President Mu’ammar al-Qadhafi follows Obama and speaks for over an hour, vehemently criticizing the UN’s power structure as uneven, archaic, and unjust. From a copy of the preamble to the UN Charter, al-Qadhafi reads: “It says nations are equal whether they are small or big—are we equal in the permanent seats? No, we are not equal. Do we have the rights of the veto? All nations should have an equal footing. For those who have a permanent seat, this is political feudalism. It shouldn’t be called the Security Council; it should be called the Terror Council.” Despite reigning in Libya for over 40 years, this is al-Qadhafi’s first UN General Assembly speech. (BBC 9/23/2009)